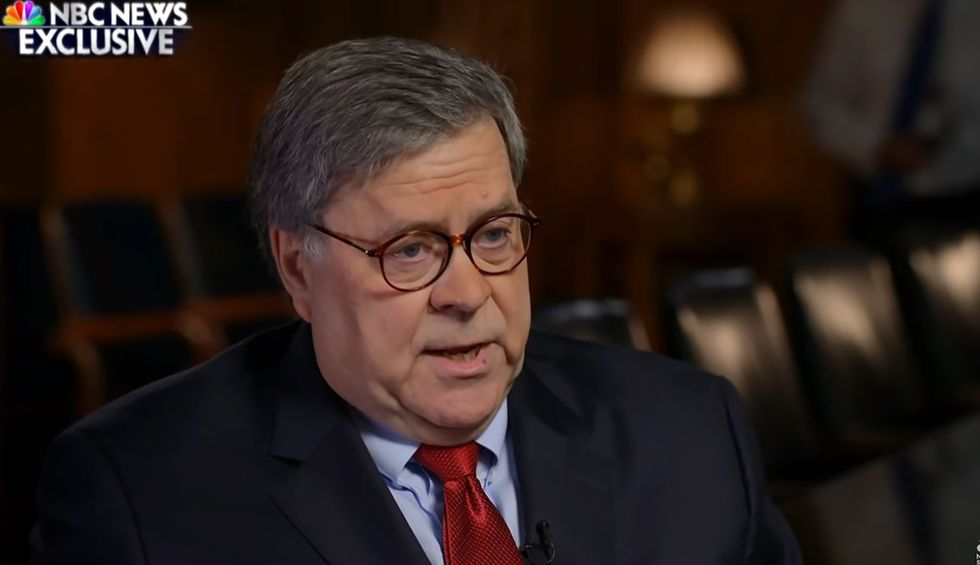 Image via Screengrab.
Igor Derysh
and
Salon
May 07, 2020The Right Wing

Attorney General William Barr urged Trump administration officials to back off its call for the entire Obamacare law to be struck down in a legal battle expected to be heard by the Supreme Court later this year, according to a new report.

Barr made a "last-minute push" Monday to preserve parts of the Affordable Care Act before Wednesday's deadline to modify arguments in the case to Vice President Mike Pence, White House counsel Pat Cipollone and other administration officials, CNN reported. It is unclear if the meeting affected the administration's position.

The attorney general and other top brass have argued that dismantling the entire law could have "major political implications" come Election Day. Barr urged officials to modify their stance to include keeping parts of the law in place.

The Trump administration last year backed a lawsuit filed by Texas and more than a dozen Republican-led states seeking to invalidate the legislation after the 2017 Republican tax cut law eliminated the individual mandate penalty, which was central to the Supreme Court's 2012 decision upholding it as constitutional.

Both Barr and Health and Human Services Secretary Alex Azar have argued against repealing the law in full, and Barr recently argued that dismantling the law amid the coronavirus pandemic would disrupt health care for millions before the election, according to CNN.

But other Trump aides have pushed back, arguing that the lawsuit should proceed after Republicans campaigned on repealing the law for nearly a decade.

The administration previously argued that only parts of the law should be repealed. Shortly after Barr's appointment, the Justice Department revised its position last year to argue that the entire law should be struck down.

Though the case is expected to be heard this fall, the Supreme Court is not expected to rule on the case until 2021 — well after the election.'

If the Trump administration and the Republican states get the decision they have sought for years, about 20 million people are expected to immediately lose their health coverage and tens of millions would lose protections for pre-existing conditions. The decision would also affect as many as 35 million Americans estimated to be at risk of losing their employer-based health coverage amid the coronavirus-caused recession.

"It's a bad idea to try and strip millions of Americans of their health coverage in the middle of a global pandemic," Sen. Chris Murphy, D-Conn., who sits on the Senate Oversight Committee, tweeted. "But that's exactly what President Trump is doing."

"If President Trump & Republicans refuse to stop their partisan health care lawsuit—even during a global pandemic—it will be the ultimate proof they care more about politics than patients & families who could be hurt by their relentless attacks," Sen. Patty Murray, D-Wash., the ranking member on the Health, Education, Labor and Pensions Committee, added.

"The administration still hasn't abandoned its effort to destroy the Affordable Care Act, which provides coverage to millions through Medicaid and private exchanges, and protects preexisting conditions," Rep. Alan Lowenthal, a member of the Congressional Progressive Caucus, said. "If they succeed, the results will be devastating."