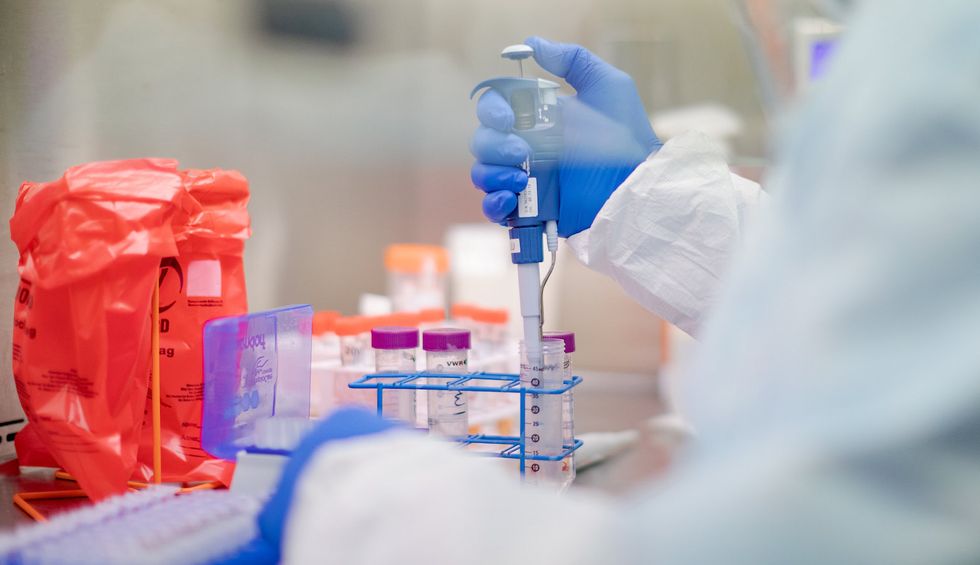 Pennsylvania Commonwealth microbiologist Kerry Pollard performs a manual extraction of the coronavirus inside the extraction lab at the Pennsylvania Department of Health Bureau of Laboratories on Friday, March 6, 2020. https://creativecommons.org/licenses/by/2.0/
Sarah K. Burris
and
Raw Story
May 05, 2020Personal Health

A new study from scientists at the Los Alamos National Laboratory says that the novel coronavirus SARS-CoV-2 has mutated into another strain that is more contagious than the original, reported the Los Angeles Times.

“The new strain appeared in February in Europe, migrated quickly to the East Coast of the United States and has been the dominant strain across the world since mid-March, the scientists wrote,” the Times said.

The study also said that the new strain could make people more vulnerable after a second infection.

The study hasn’t been peer-reviewed, but the scientists posted it online at BioRxiv “to speed up collaborations with scientists working on COVID-19 vaccines or treatments.” The research has focused largely on sequencing the genes of earlier strains of the virus. The team worked with scientists at Duke University and the University of Sheffield in England to identify 14 mutations of the coronavirus. They’re focusing on a mutation called D614G, which the Times pointed to as “being responsible for the change in the virus’ spikes.”

“The story is worrying, as we see a mutated form of the virus very rapidly emerging, and over the month of March becoming the dominant pandemic form,” said study leader Bette Korber, who serves as a computational biologist at Los Alamos. “When viruses with this mutation enter a population, they rapidly begin to take over the local epidemic, thus they are more transmissible.”

But some scientists are disputing the findings.

“I think those claims are suspect, to say the least,” tweeted Harvard Associate Professor Bill Hanage, who works in the School of Public Health. “Major observation: a specific mutation in the spike protein of the virus has been in a higher fraction of cases as the pandemic has worn on in multiple places. Given the role of the spike protein in [the] entry of the virus to cells this might be reasonable.”

He explained that it isn’t about the virus, as much as it is about the environment in which the virus can be transmitted.

“The paper distinguishes between orange and blue variants (you don’t need to be tracking the exact mutation or character state for you wonderful nerds following) the orange is the old one, the blue is the more recent one,” he explained.

But the blue mutation is already in all (or close to all) of the cases of the early outbreak in Northern Italy.

“This might be selection,” he continued. “It might well also be chance, the lucky strain that got out of China. Most outbreaks around the world descend from Europe now. Meanwhile, China’s extreme interventions appear to have squashed what remained in China and stemmed the dissemination of the other parts of the early viral diversity ([with] strong caveat that there are far fewer genomes from regions that are not Europe or the US).”

He also noted that there are a lack of genomes from the later stages of the pandemic from China and Asia, making it hard to analyze. He explained that more samples from Iran could be helpful, because the genome there appears to be very close to the original strain.

“Essentially the virus has been mutating, as Xueting Qiu and I said it would in February,” he went on. It doesn’t exactly mean much, however, because mutations happen when genomes replicate. “The increase in the ‘blue’ variant may well reflect a population bottleneck, in which it happens to be the one that gets into the (relatively inattentive) European population and then spreads like wildfire. That’s what I *think* happened.”

Read the full report from the Los Angeles Times and the dispute from Assoc. Prof. Hanange.