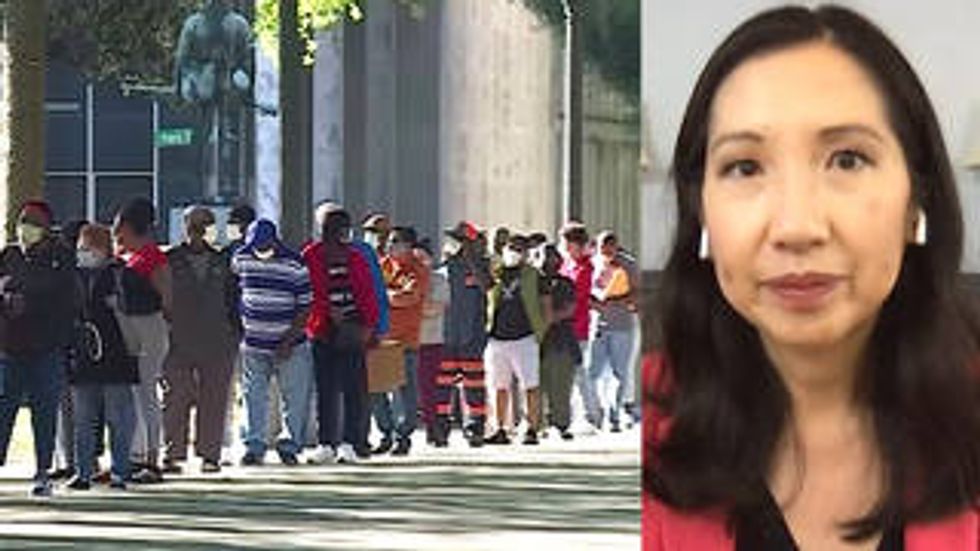 We look at the deadly disparate impact of the pandemic on African Americans as told through an in-depth story for The New York Times Magazine by writer Linda Villarosa in her new piece, “'A Terrible Price': The Deadly Racial Disparities of Covid-19 in America,” that tells what happened to the Zulu club, a Black social organization in New Orleans, during and after Mardi Gras. She reports that the experience is usually a joy, but the coronavirus made it a tragedy.

AMY GOODMAN: This is Democracy Now!, democracynow.org, The Quarantine Report. I’m Amy Goodman. We turn now to look at the deadly disparate impact of the pandemic on African Americans as told through an in-depth story for The New York Times Magazine about what happened to the Zulu club, a Black social organization in New Orleans, during Mardi Gras. Usually the experience is a joy. The coronavirus made it a tragedy.

As reporter Linda Villarosa writes, quote, “When the Krewe of Zulu parade rolled out onto Jackson Avenue to kick off Mardi Gras festivities on Feb. 25, the party started for black New Orleans. Tens of thousands of people lined the four-and-a-half-mile route, reveling in the animated succession of jazz musicians, high-stepping marching bands from historically black colleges and universities and loose-limbed dancers dressed in Zulu costumes, complete with grass skirts and blackface makeup, an homage to the Zulu people of South Africa and, for some, a satirical spit in the eye to the past, when Mardi Gras was put on by clubs of white men who barred black people from taking part,” Villarosa writes.

Linda Villarosa reports that at the same time the Mardi Gras festivities brought over a million visitors from around the world to New Orleans, the Trump administration was repeatedly downplaying the risk of COVID-19, even as the president was being warned by advisers about the potential of half a million deaths and an economic meltdown. Members of the Zulu club paid a terrible price.

A recent study shows African Americans represent 13% of the U.S. population, but counties with higher Black populations account for more than half of all COVID-19 cases and almost 60% of deaths.

For more, Linda Villarosa joins us. She directs the journalism program at City College of New York and contributing writer for The New York Times Magazine, where her recent cover story appeared, “'A Terrible Price': The Deadly Racial Disparities of Covid-19 in America.”

Welcome back to Democracy Now!, Linda. An amazing piece. Take us back to that day where the Zulu club gathered.

LINDA VILLAROSA: Well, thank you for having me again. It’s nice to hear you and see you.

Well, that was — first of all, Carnival begins in early January in New Orleans. And so there had been a whole bunch of very large-scale events and activities, parties, leading up to the Mardi Gras Day parade on the 25th. And that was where so many people gathered along the streets. And the Zulu club is known for throwing golden-painted coconuts out, and that’s the prize that people want to catch. So, everyone was standing shoulder to shoulder, you know, arm in arm almost, trying to catch the coconuts and seeing — standing on the sidelines, being part of the parade. So it was —

Linda, are you back with us? This is the price we pay, by the way, one of the smaller prices, but in this pandemic, people are, in order to ensure and stop community spread, reporting to us from home. We’re going to turn right now back to Linda. Linda, continue to tell us your story.

LINDA VILLAROSA: So, people were standing shoulder to shoulder, arm in arm, along the parade route, as well as taking part in the parade. So it became, because it was so crowded — and it was a joyful time and a wonderful time. My daughter was there, and she was telling me about it. It became a coronavirus hothouse, just because no one knew what was brewing.

AMY GOODMAN: So, then talk about what happened. What were the warnings at the time in New Orleans? And tell us then what unfolded.

LINDA VILLAROSA: So, behind the scenes at the Louisiana Department of Health, and even the local Department of Health, there was worry, but they were looking to the federal government for direction. So, no one at the time knew that it was bad enough to cancel the parade or cancel any of the festivities. And also, they were more worried about people bringing it in, you know, visitors coming in, not what was actually happening.

AMY GOODMAN: And so, what transpired after that? Just tell us the Zulu club’s story.

LINDA VILLAROSA: So, what happened was, with the Zulu club men, it’s 800 mostly African American men who are from all walks of life. And they do this club all year round, but the Carnival, the Mardi Gras season, is the height of their fun and, you know, what they’re doing, their parties and their festivals. So, they were — after the 25th of February, some of them started getting ill. And they were communicating with each other. You know, it’s a close-knit group. Sometimes they were learning about each other on Facebook, who was getting ill, and also they were communicating with each other.

AMY GOODMAN: So the overall number, by the time you finish the story, of people in the Zulu club who died as a result of COVID-19, that started with them just not being told at the time of the true dangers of COVID-19 and the threat in New Orleans.

LINDA VILLAROSA: Exactly. So, it was — when I started, it was six men had died, and 20 had been infected. When I finished, two more had died — a total of eight — and 30 had been infected. And that’s the ones that they knew about, with the 30. And the organizers of the Zulu club think it’s more.

AMY GOODMAN: And so, then, Linda Villarosa, talk about the messages of the Trump administration, why what the president says matters. At the time when all of this started, he was in India poo-pooing what was happening in the United States, saying it wasn’t a problem. But if you could then talk about the racial disparities? This is an issue you focus on in so many cases. The last time we had you on, it was the racial disparities in the death of women who give birth, and the problem with African American women who die in childbirth or after childbirth. But if you can talk about this issue that has become so significant in this country now in the pandemic?

LINDA VILLAROSA: So, even as the federal government was downplaying COVID, behind the scenes there were organizations, including the American Medical Association, the American Academy of Pediatrics, the NAACP, different lawyers’ groups, and even politicians, were knowing that these racial disparities that exist in the United States that make Black people more vulnerable to serious illnesses — and other people of color — existed and were going to intersect with COVID in the worst kind of way. And so, Black people are more likely to have the kinds of underlying conditions that make COVID more serious. And that just is a fact. And so, when COVID came, it was what some people have called the perfect storm of terribleness, with people already with underlying conditions being hit with this really serious, confusing virus.

AMY GOODMAN: And can you talk about the distrust that African Americans have of the healthcare system, and the historical context for that?

LINDA VILLAROSA: So, we’ve known for, I mean, centuries, decades, years, that Black people and other people of color are treated unfairly in our current medical system. And how I think of it is, I don’t think doctors and other healthcare providers go into medicine in order to do harm, but it happens because of mostly unconscious bias.

And so, it’s been very well documented that Black people and other people of color, but specifically Black people, have unfair treatment, whether it’s in pain management, whether it’s — and it’s in the emergency room. It’s when getting C-sections during birth. It’s all kinds of different treatments where Black people just aren’t treated well. So, if there’s a distrust among Black people of the healthcare system, it’s real, and it’s evidence-based that there is a problem, that people should be distrustful. And —

AMY GOODMAN: Speaking of history, I wanted to go to Nikole Hannah-Jones, who just won a Pulitzer Prize for her lead essay for The New York Times’ 1619 Project. She spoke to MTV last month about the racial disparities in COVID-related deaths.

AMY GOODMAN: That was Nikole Hannah-Jones. Linda Villarosa, you were a contributor to the acclaimed 1619 Project with an essay titled “Myths about physical racial differences were used to justify slavery — and are still believed by doctors today.” As we wrap up, if you could comment on the significance of The 1619 Project, that you were a part of, and also not only the Pulitzer going to Nikole Hannah-Jones, but to Ida B. Wells, as well, in a special citation and award for her outstanding and courageous reporting on the horrific and vicious violence against African Americans during the era of lynching? If you can take us full circle?

LINDA VILLAROSA: Well, first of all, we are so proud of Nikole, and I was honored to be part of that project. And I think that it speaks to the power of Black women journalists, Nikole and Ida B. Wells, and I’m really proud to be a part of that group. I think that what 1619 did, the project, was take us back and look at the legacy of enslavement. And, you know, there’s always people saying, “Oh, slavery was so long ago. That’s not part of our experience.” But it is. And our charge was to prove that what happened during enslavement still lingers today.

AMY GOODMAN: Linda Villarosa, I want to thank you for being with us. She directs the journalism program at City College of New York, contributing writer for The New York Times. We’re going to link to your piece, that cover story of The New York Times Magazine, “'A Terrible Price': The Deadly Racial Disparities of Covid-19 in America.” And we’ll also link to The 1619 Project.