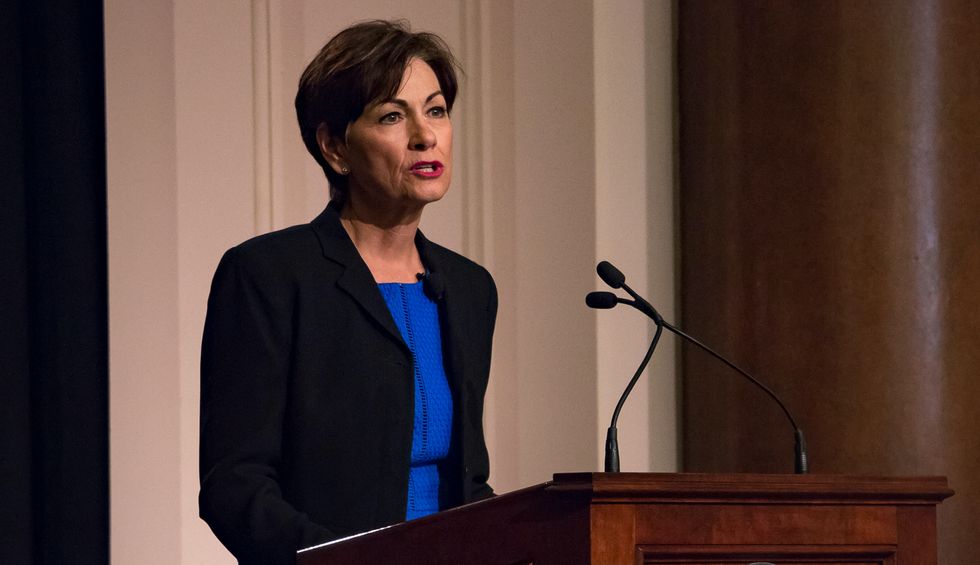 Governor Kim Reynolds speaks at the Iowa Capitol moments after becoming the state’s 43rd governor of the state. 5/24/2017 Photo by John Pemble https://creativecommons.org/licenses/by-sa/2.0/
Kerry Eleveld
and
Daily Kos
May 07, 2020

Republican governors from the five states that have entirely declined to issue statewide stay-at-home orders to slow the spread of coronavirus declared their approach a "model for success" Tuesday that can be replicated across the country.

"Our collective experience ensures that our contribution toward reopening our nation’s economy is stable, safe and durable," they wrote in the Washington Post, all but declaring their states victorious. The authors included Govs. Mark Gordon of Wyoming, Pete Ricketts of Nebraska, Asa Hutchinson of Arkansas, Kim Reynolds of Iowa, and Mike Parson of Missouri. But a quick google suggests all is already not well in several of those states.

"More than 1,600 workers at four Iowa meatpacking plants have been infected with the coronavirus, state health officials reported Tuesday," according to the Des Moines Register, the same day the op-ed appeared in the Post.

In other news from Tuesday, "Missouri reported the highest number of new coronavirus cases in one day Monday," the same day the state reopened some businesses, according to the New York Post. The 368 new cases reported Monday followed 319 new cases the day before, so not necessarily a weird fluke.

As of Tuesday, the city of Grand Island, Nebraska, also had 1,228 COVID-19 cases in a city of some 51,000, putting the "per capita rate of infection well above that of New York, the hardest-hit state in the nation," noted the Wall Street Journal.

Arkansas also announced Wednesday that more than 100 inmates and one staff member had tested positive for COVID-19 at a low-security prison in Forrest City.

As we noted yesterday, it's almost impossible to say what's in store for many of these states that are simultaneously reporting upticks in COVID-19 cases and newly easing whatever social distancing measures they had enacted. There's about a month-and-a-half lag time between disease spread, incubation, and death.

So frankly, one has to wonder what the heck kind of political calculus these governors were making when they decided to memorialize in writing the notion that they had successfully cracked the coronavirus code.