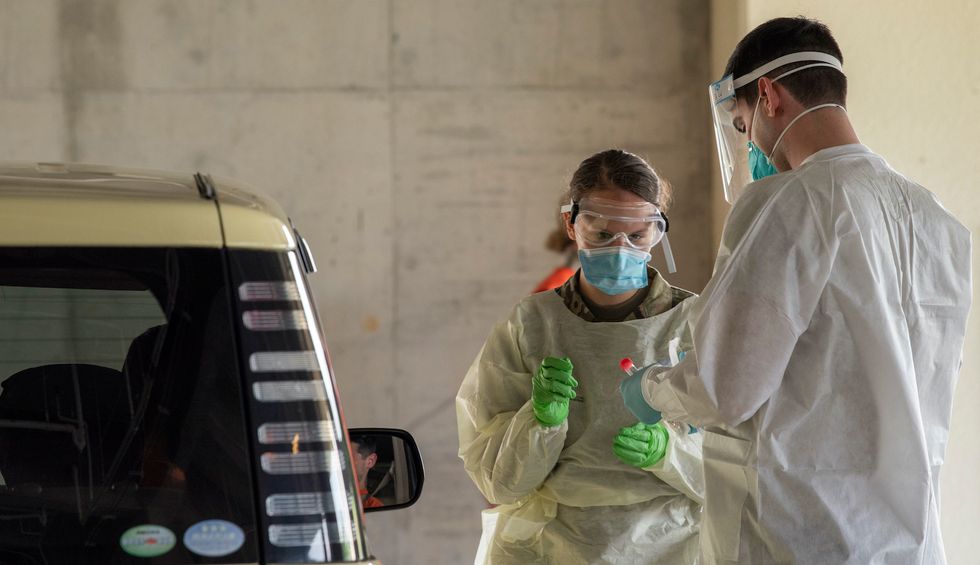 Airmen from the 18th Medical Group conduct COVID-19 testing at Kadena Air Base, Japan, March 20. Under the most current guidance from the Centers for Disease Control, the 18 MDG has increased its testing for the disease. Those who are tested become Persons Under Investigation (PUI), are contacted by Public Health, placed into isolation and instructed on how to avoid spread of their illness to family members in the home. Public Health interviews the PUI and develops a list of “close contacts” who are then called and given instructions to quarantine for 14 days. A close contact is someone who lived with or cared for a PUI, had direct physical contact with a PUI, or shared eating utensils or had prolonged close conversation with a PUI. On average, lab results take 2-5 days to return. If results are negative, isolated and quarantined individuals will be notified and released. If results come back positive, quarantine for the close contact will continue for 14 days and isolation for the PUI will continue until the PUI is medically cleared. Someone who has had contact with someone deemed a close contact does not need to be placed in quarantine but should continue to practice social distancing. (U.S. Air Force photo by Airman 1st Class Mandy Foster)
Mark Sumner
and
Daily Kos
April 14, 2020

I’m far from the first to note that, over the last two months, the time that Americans have spent looking at charts has gone up … exponentially. And, as it happens, this article contains the 300th chart I’ve made since we started tracking the outbreak of 2019 novel coronavirus in the Hubei region of China … at least 300 years ago.

Over time, we’ve looked at charts of cases in China, charts of cases around the world, and eventually charts of cases in the United States. Many of those charts, in nation after nation, seem to follow a similar progression. Early confidence gives way to a period of soaring case counts as the realization sets in that COVID-19 is real, is serious, and definitely can happen here. Eventually, actions are taken that reduce that initial rate of growth. In several countries, that stage has been followed by successful efforts to contain cases to the extent that recoveries outpace new cases and the load of active cases is reduced. In a very, very few localities, the number of active cases has been pushed so low, that the government has cautiously relaxed the pressures that broke the early stages of the epidemic.

But right now several countries, including the United States, are talking about opening up, way, way too soon, and inviting disaster.

To start with, let’s revisit the most basic chart that has become the unfortunate focus of our lives.

As with everything else in this event, it seems a lifetime ago that Italy was the nation with the largest number of COVID-19 cases, battling against the disease with a rapidly overtaxed healthcare system. Unfortunately, the warnings that Italy was just “a week ahead” of the United States didn’t even come close to anticipating what was coming, for a reason that’s just at the left edge of the chart.

On March 9, Prime Minister Giuseppe Conte imposed a national quarantine on Italy, making it the first nation to go into the kind of “lockdown” that has now become all too familiar. In the previous two weeks, Italy had engaged in limited shutdowns of schools and facilities, first in just a few localities, then in an expanding set of “red lines.” But by March 9, that strategy was clearly ineffective. With 9,000 cases—a number that had just exceeded the case count in South Korea—Italy expanded the restrictions nationwide.

Meanwhile, the United States continued to do … essentially nothing. The predictions that America was a week behind proved eerily accurate, as the U.S. passed that 9,000 number on March 18. Only in the U.S., that was not accompanied by any nationwide lockdown. In fact, that was just one day after Governor Andrew Cuomo enacted a statewide lockdown for New York. At that point, the United States hadn’t just matched Italy in the number of cases it had just before its own lockdown, it had exceeded the rate of growth.

On the first chart, that period between the start of the month and the time when the U.S. arcs upward around March 20 appears fairly quiescent. On this chart it’s clear that there were really two periods to this. The first part, up until about March 16, was the all fine, nothing to see here period punctuated by dozens of Trump quotes suggesting that the whole pandemic would soon blow over. This was followed by a period better described as Oh hell, we should have been testing, in which the real scope of the problem began to be clear. The way in which the number of U.S. cases at this point was actually completely defined by inadequate testing can be seen in a number of days in which the rate of growth actually exceeds the theoretical unchecked spread of the virus, showing that there was a substantial unrealized pool of cases already out there in the population.

Over time, both Italy and the United States have driven down the rate of growth. For Italy, that original national lockdown on March 9 becomes particularly evident about two weeks later with a sharp decline around March 22. Subsequent tough enforcement, social pressure, and consistent application has driven the rate of growth in Italy down to around 4% each day.

Meanwhile, the United States has implemented patchwork restrictions at the state and local level. Like Italy, New York state had engaged in city and county level lockdowns previous to March 17, and those had helped. But the statewide restrictions in Washington on March 16, then in New York, California, and Illinois the following day, contributed directly to a sharp fall in the rate of growth in the first week of April. Since then, each additional state that pulled the switch has helped push the numbers down. In the last few days, the United States has achieved a growth rate of about 6%.

Those rates may look very similar, but the extra weeks of inaction in the United States, and the absolute failure to enact any restrictions at a federal level, created a massive case load that means those percentages mean something very different in terms of new cases.

But here’s the bigger point: Italy isn’t ready to relax social distancing restrictions. The number of people recovering is still, even at this point, below the number of new cases being added. And while the gradually improving testing process in Italy means that more of the new cases are not being detected when those people are hospitalized, the number of hospitalized cases is still massively pressing their healthcare system. The case fatality rate in Italy has fallen from horrifying heights, but is still sitting above 12% — also know as still horrifying.

Italy cannot afford to remove social distancing restrictions. All it has achieved to this point could be lost, almost instantly, should that rate of growth line creep up even marginally. To save the lives of thousands, Italy has to carry on a dedicated national program of testing, self-isolation, case tracing, and quarantine. That’s the only way it can drive toward the bottom line of that growth chart. That’s the only way that possibly—possibly—any of the pressure from those social distancing restrictions could be relaxed.

The United States isn’t even close to that point. Yes, the number of new cases each day has fallen recently, but that number continues to be at least partially defined by the one factor that has been genuinely consistent in the United States from the very beginning: Inadequate testing. In states like New York, the number of positive tests continues to be above 40%. That number shows that, in a large majority of cases, those being tested are only those who are demonstrating symptoms, and often those already in hospital. In fact, many people who are seriously ill are still unable to get a test. It’s not at all clear that the United States has actually leveled its daily case count, rather than simply bumped up against testing capacity.

Because the genuinely supportive actions taken by Donald Trump over the course of this crisis begin with “jack” and end with “it,” the rate of growth in the United States has been absolutely defined by the actions of governors, mayors, and other local officials. The nation has been very fortunate in that Washington, California, and Illinois were led by governors who recognized the danger and locked down relatively early. But the number of governors who watched 5 cases go to 30 one week, then watched 30 go to 165 the next week, then spent the day patting themselves on the back saying “we’re not New York” because they couldn’t recognize their state was hitting a 35% growth rate means that there are more hot spots to come in the United States.

Barring strong federal action, it seems unlikely that America will bring its rate of growth much below the current point. That both makes a nationwide program of screening, testing, tracing, and isolation vastly more important, and almost infinitely more difficult.

We already have a disaster that’s growing toward catastrophe. Let’s not invent a new word.