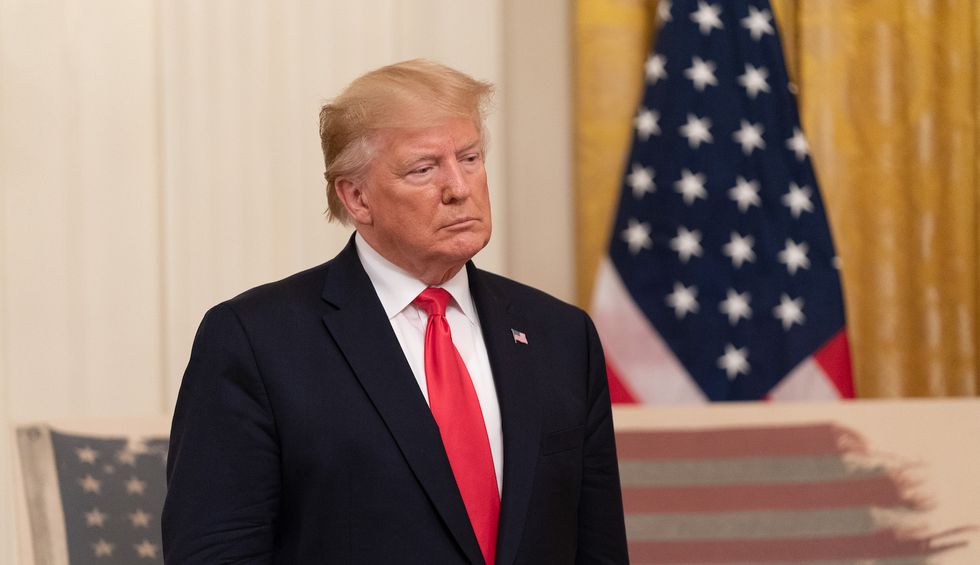 President Donald J. Trump, joined by the Prime Minister of the Netherlands Mark Rutte, participates Thursday, July 18, 2019, in the presentation of a WW II flag flown aboard a landing craft during the D-Day invasion at Normandy in 1944, presented to officials of the Smithsonian Institute during a ceremony in the East Room of the White House. (Official White House Photo by Shealah Craighead)
Norman Solomon
and
Common Dreams
April 23, 2020

Two years after Donald Trump won the presidency, the author of "How Fascism Works" assessed him in a video. "It might seem like an exaggeration to call Trump a fascist," Yale professor Jason Stanley said. "I mean, he's not calling for a genocide or imprisoning his own people without due process. But . . . if you use history and philosophy as a guide, it's easy to see parallels between Trump's words and those of the most reviled fascists in history. That scares me, and it should scare you too."

Drawing on his decade of studying fascist propaganda, Stanley concluded: "If you're not worried about encroaching fascism in America, before long it will start to feel normal. And when that happens, we're all in trouble."

We’re all in trouble.

Trumpism has started to feel normal. Trump stands a good chance of winning re-election in November. And his odds have improved because the Democratic Party is expected to nominate an abysmal candidate.

For ample good reasons, many progressives disdain Joe Biden. He has a long record as a corporate servant, ally of racial injustice and avid supporter of the military-industrial complex. Now, in the midst of the coronavirus pandemic, he scarcely seems able to articulate anything worthwhile.

In short, as the two contenders with a chance to win the presidential race, Biden and Trump are offering a choice between neo-liberalism and neo-fascism.

To hear a small but significant portion of the U.S. left tell it these days, that's not a meaningful choice. Some say preventing the re-election of Trump isn't important. That amounts to ignore ing political reality, an evasion with potentially vast consequences.

"We should make no mistake," longtime progressive journalist Juan González said days ago, "that this country is edging closer and closer to neo-fascist authoritarianism."

That reality doesn't stop some on the left from evading it—preferring to conflate the two major parties to a degree akin to denial.

Earlier this month, I listened to a discussion that included an eminent left author who flatly declared that on "all major issues" there is "no real difference between the Democratic and Republican parties." A preposterous claim.

Soon afterward, I read an article by an editor at a high-quality left magazine that displayed odd complacency about whether or not Trump gets a second term: "The most likely outcome if he wins re-election is not a crude dictatorship, but further erosion of civil liberties within the existing political framework. Opposition parties and media will still be able to function. The people who suffer the worst forms of oppression under Trump will be the immigrants and ethnic minorities whose rights are routinely violated under Republican and Democratic presidencies alike."

Really? It won't matter to "immigrants and ethnic minorities" whether Trump is president for another four years?

When there's a genuine threat of sliding into fascism, the left has an overarching responsibility to fight against the momentum of the extreme right. Sometimes that requires a broad coalition.

The left in France was correct when, in 2017, it united with a corporate centrist to defeat neo-fascist National Front candidate Marine Le Pen in the runoff election for president. In 2020, for the United States, the dangers are no less grave.

It's true that leading "moderate" Democrats and even some self-described "progressives" have routinely functioned as enablers for the rightward tilt of national politics—a bad dynamic that has continued on Capitol Hill in the midst of the pandemic under leadership from Nancy Pelosi and Chuck Schumer. Not wanting to seem obstructionist often ends up being helpful to right-wing agendas.

But here's a key point: People who deny or downplay the real threat of neo-fascism consolidating itself via Trump's re-election are, in effect, serving as enablers for the forces of the virulent extreme right that already controls so much of the U.S. government.

"It's important to remember that right now, the issue of greatest urgency is to get rid of the malignancy in the White House," Noam Chomsky said in an interview last week. "If we don't do that, everything else pales into insignificance. To keep this for another four years means racing to the abyss on global warming, possibly reaching irreversible tipping points, sharply increasing the threat of nuclear war, stuffing the judiciary with young, ultra-right, mostly unqualified lawyers who will guarantee that anything to the left of Attila the Hun can't survive for a generation, and on and on. This is top priority."

In that video interview with The Intercept, Chomsky added: "There's a thing called arithmetic. You can debate a lot of things, but not arithmetic. Failure to vote for Biden in this election in a swing state amounts to voting for Trump. Takes one vote away from the opposition, same as adding one vote to Trump. So, if you decide you want to vote for the destruction of organized human life on Earth. . . then do it openly. . . . But that's the meaning of 'Never Biden.'"

For those in the USA who recoil at applying such a phrase to today, preferring to call it hyperbole, Stanley's book sheds clear light on an insidious process that normalizes and obscures: "Normalization of fascist ideology, by definition, would make charges of 'fascism' seem like an overreaction, even in societies whose norms are transforming along these worrisome lines. Normalization means precisely that encroaching ideologically extreme conditions are not recognized as such because they have come to seem normal. The charge of fascism will always seem extreme; normalization means that the goalposts for the legitimate use of 'extreme' terminology continually move."

Meanwhile, Stanley wrote, "Fascist politics exchanges reality for the pronouncements of a single individual, or perhaps a political party. Regular and repeated obvious lying is part of the process by which fascist politics destroys the information space. A fascist leader can replace truth with power, ultimately lying without consequence. By replacing the world with a person, fascist politics makes us unable to assess arguments by a common standard. The fascist politician possesses specific techniques to destroy information spaces and break down reality."