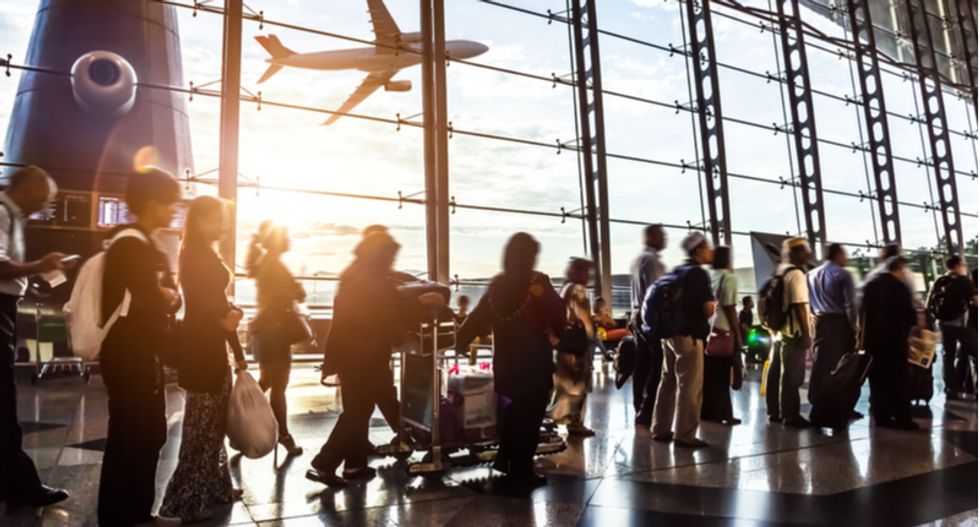 Virtually every time Donald Trump talks about the COVID-19 pandemic, he brags that the outbreak would have been much worse in the US absent his "quick action" to "ban" travel from China.

"Nobody wanted [a China travel ban] to happen,” he said in late March in response to criticism of his handling of the pandemic. “Everybody thought it was just unnecessary to do it. And if we didn’t do that, thousands and thousands of people would have died, more than what’s happened.”

His defenders in the conservative press have embraced and amplified the claim. "We can say this tonight without a doubt," said Fox News host and informal Trump advisor Sean Hannity. "The president's China and European travel ban -- I predict will go down as the single most consequential decision in history. That's not political. It brought us time."

The big problem here is that this never happened. The restrictions he imposed on travel from China and Europe (excluding the UK, where he owns golf resorts) places were limited, and imposed late. As a result, hundreds of thousands of people traveled from countries with severe coronavirus outbreaks to the US since Trump was informed of the seriousness of the pandemic, most of them with little screening and no mandatory quarantines.

Trump's initial resistance to even these limited measures, and his continuing refusal to impose stronger ones, is the primary reason why the US currently leads the world with 338,000 confirmed cases of the disease only 76 days after the first one was identified in Snohomish County, Washington. (This all happened just a few short months after Trump dismantled the federal government's early warning system to detect new pathogens emerging in China.)

Even the conservative Washington Times criticized Trump's "travel ban" spin, editorializing that the restrictions he has put in place have "loopholes large enough to fly a 777 through."

[I]t simply isn’t true. At no time through the course of this awful period have flights even once been halted between either China and the U.S. or Europe — including even Italy — and the United States.

In the case of China, on Jan. 31 — weeks after it was known that the coronavirus was a serious problem — the administration restricted travel for “foreign nationals who had been in China in the last 14 days.”

The Trump administration’s alleged Europe travel ban... is similarly weak. It too exempts Americans from any restrictions whatsoever, and the screening that returning Americans have been subjected to at airports has been laughably weak.

But to understand how egregious Trump's dishonesty about this really is, and why no self-respecting journalist should ever let this claim go unchallenged, one has to look at the whole timeline.

The US government first learned of the novel coronavirus in late December.

On January 3, HHS Secretary Alex Azar was informed by Chinese officials of the severity of the problem in their country. Then, according to the Washington Post, Azar "couldn’t get through to Trump to speak with him about the virus until Jan. 18," and when he finally did reach Trump by phone, "the president interjected to ask about vaping and when flavored vaping products would be back on the market.”

According to Reuters, over the four crucially important weeks of inaction that followed Azar's notification by Chinese officials, "the National Security Council staff, the state department and other federal agencies argued about everything from how best to screen for sick travelers to the economic impact of any restrictions."

The NSC staff ultimately proposed aggressive travel restrictions to high-level administration officials - but it took at least a week more for the president to adopt them, one of the government officials said.

Each day that the administration debated the travel measures, roughly 14,000 travelers arrived in the United States from China, according to figures cited by the Trump administration.

The exact date that NSC formally recommended those travel restrictions is unknown, but 9 days before Trump issued the limited ban on foreign nationals coming in from China, "Trump downplayed the threat posed by the virus, telling CNBC, 'We have it totally under control.'”

According to an analysis of entry data by The New York Times, 430,000 people have taken direct flights from China to 17 different destinations in US since the outbreak occurred in that country. Of those, 390,000 made the trip while the famously dysfunctional Trump White House dithered over whether to take action, and another 40,000 boarded flights bound for the US after Trump's so-called "travel ban" had been established.

At that point, another consequential screw up was made with almost 400 Americans who had been traveling on the Diamond Princess cruise ship, which at the time was docked in Japan with a severe outbreak of COVID-19.

Fourteen of the Americans had tested positive for the disease in Japan, and according to The Washington Post, "a fierce debate broke out" over what to do with them.

The State Department and a top Trump administration health official wanted to forge ahead. The infected passengers had no symptoms and could be segregated on the plane in a plastic-lined enclosure. But officials at the Centers for Disease Control and Prevention disagreed, contending they could still spread the virus. The CDC believed the 14 should not be flown back with uninfected passengers....

The State Department won the argument. But unhappy CDC officials demanded to be left out of the news release that explained that infected people were being flown back to the United States — a move that would nearly double the number of known coronavirus cases in this country.

The extent of Trump's personal involvement in that inter-agency argument is unknown, but he is ultimately responsible for his own "top official," and for purging career professionals from the State Department and replacing them with apparatchiks aligned with him politically.

In any event, the CDC officials were correct, and overriding their recommendation proved to be a disastrous error. The passengers were transported to an Airforce base in California where, according to a whistleblower complaint obtained by The New York Times, Health and Human Services officials interacted with them "without proper medical training or protective gear, then scattered into the general population."

The Times reported that HHS staff "were sent to Travis Air Force Base and March Air Reserve Base in late January and early February and were ordered to enter quarantined areas, including a hangar where coronavirus evacuees were being received," but "were not provided safety-protocol training until five days into their assignment.

Without proper training or equipment, some of the exposed staff members moved freely around and off the bases, with at least one person staying in a nearby hotel and leaving California on a commercial flight. Many were unaware of the need to test their temperatures three times a day.

The first confirmed case of coronavirus "in a patient with no known contact with hot zones or other coronavirus patients emerged" about two weeks later near Travis Air Force Base.

So Trump never shut down travel from China or Europe, and only imposed limited restrictions after dithering for weeks. It was a crucial part of the "70 days of denial, delays and dysfunction" that hobbled Trump and his team of hand-picked loyalists, caused COVID-19 to spread rapidly in the US, and is projected to ultimately lead to the deaths of hundreds of thousands of people in this country.

I was criticized by the Democrats when I closed the Country down to China many weeks ahead of what almost everyone recommended. Saved many lives. Dems were working the Impeachment Hoax. They didn’t have a clue! Now they are fear mongering. Be calm & vigilant!

I was criticized by the Democrats when I closed the Country down to China many weeks ahead of what almost everyone… https://t.co/kZagXpNCvF
— Donald J. Trump (@Donald J. Trump) 1583153720