Trump has abdicated core duties of the presidency 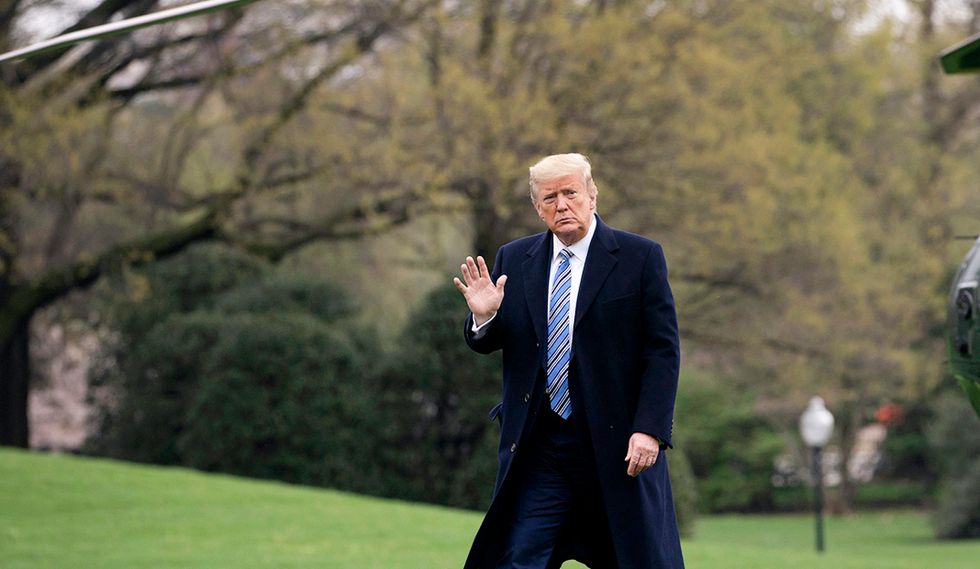 As President Donald Trump hurtles into his high-stakes bid for re-election, he is proving more than ever that he doesn't deserve the office he holds. Not only is he incapable of meeting many of its demands, as the coronavirus has raged across the country, he has repeatedly shirked the duties of the presidency.

On Wednesday, he made clear that he doesn't think a look back on the crisis will serve him well:

Once we OPEN UP OUR GREAT COUNTRY, and it will be sooner rather than later, the horror of the Invisible Enemy, exce… https://t.co/twqNfJBWkM
— Donald J. Trump (@Donald J. Trump)1586357576.0

"This is an incredible admission of guilt and failure," said MSNBC Chris Hayes in response to the tweet.

Compare this sentiment to what President Barack Obama said in 2011, when the country was still suffering mightily from the aftershocks of the financial crisis and as he looked toward the prospects for re-election.

“For me to argue, look, we’ve actually made the right decisions, things would have been much worse has we not made those decisions — that’s not that satisfying if you don’t have a job right now,” Obama said in a CBS interview. "I understand that and I expect to be judged a year from now on whether or not things have continued to get better."

He wasn't telling people to forget what had happened — he was taking responsibility for the crisis and asking to be held accountable for the results.

When asked about the failures of his administration to set-up a sufficient testing regime at the outset of the coronavirus crisis, Trump, by contrast, said on March 13: "I don't take responsibility at all."

In fact, he tried to blame Obama for the failed tests, despite the fact that the Trump administration had neglected or dismantled much of the pandemic preparation that had been in place when it took over. And even if there had been pre-existing failures in the federal government's preparedness, Trump has been president for more than three years; whatever failings the government has have long since become his responsibility.

But while the threat was emerging, Trump looked the other way and praised the Chinese government for its handling of the virus. It was reckless to take China's claims about the outbreak at face-value, especially since reports indicate U.S. intelligence had reason to doubt the regime's honesty.

Based on the reporting we've seen so far, it's not entirely clear why Trump wasn't more involved in understanding and responding to the threat within the administration. Was he appropriately briefed but still shrugged it off? Were his officials afraid to tell him potentially upsetting news? Did he foster a culture of complacency or hesitance? Whatever the reason, though, the fact is that Trump's leadership allowed a crisis proliferate and spread out of control. And he clearly had never put any thought into how he would handle a public health crisis before this moment arrived; he has repeatedly expressed surprise at having learned the flu kills tens of thousands of people a year, a fact that anyone in charge of overseeing the Centers for Disease Control and Prevention should have understood at the start.

Key steps to mitigate the outbreak, like ensuring the federal government and states had adequate testing early on and rolling back regulations that hampered private industry involvement, weren't taken. Though the coronavirus was on the administration's radar by early January (perhaps sooner), and the seriousness of the outbreak in China was evident well before February, "federal agencies largely waited until mid-March to begin placing bulk orders of N95 respirator masks, mechanical ventilators and other equipment needed by front-line health care workers," the Associated Press reported.

While Trump pledged in his 2016 campaign to "make America safe again," he ignored a major threat that now has a reported death toll of more than 14,000 as of this writing. (That count is certain to grow substantially, perhaps many times over, and is also almost certainly an undercount given inadequate testing.)

As has been well-documented, even after the scope of the threat became clear, Trump continued to downplay the threat for weeks. He has disparaged social distancing, the practice that experts believe is now slowing the rate at which new people become infected by the virus, as "worse than the problem" itself. He falsely compared the infection to the seasonal flu, and likely contributed to many infections of the disease and even deaths by sending the message to his fans that there was little to worry about. When the CDC finally got around to recommending people wear masks to reduce the spread of the virus, Trump diminished the impact of this important announcement by seeing he wouldn't wear one. On the other hand, he has enthusiastically touted the potential for the unproven drug hydroxychloroquine to fight the virus, even though his own health experts don't share his confidence in the possible treatment.

Once the virus began straining community health capacity across the country, Trump's previous failures were revealed for the costly mistakes that they were. It wasn't only Trump, though, who was caught unprepared. The New York Times published a scathing dive Wednesday into the failures of leadership in New York, the site of the worst outbreak in the country.

But while it's open for debate how much states should prepared for this kind crisis, the federal government is the entity best positioned to take control when a calamity strikes nationwide. It has the power to react when a particular region is overwhelmed by a natural disaster. And in a pandemic like this one, where different regions of the country can expect surges on their health care systems at different times, the federal government is best positioned to sort out who needs what, when they'll get it, and how it can be allocated efficiently. And in this task, Trump has been laying down on the job.

Of course, this is isn't to say the federal government didn't do anything. It has provided equipment and support to people in need across the country.

But much of this effort has been haphazard. And it's often been too little and too late. New York hospitals, for instance, have been in chaos for weeks. While the Department of Defense sent a hospital ship to provide relief, regulations hampered its ability to assist for days, with one local health official calling it a "joke."

And Trump has explicitly denied that he's responsible for providing states with the help they need.

"We're not a shipping clerk," Trump told governors looking for supplies. He told them to try to get supplies on their own. He's said he doesn't want to talk to governors who aren't nice enough, even though that could mean the residents of the governors' states — who are his constitutes (possibly even his voters!) as well — could suffer and die as a result.

And in fact, operations and distribution  — the vital skills of a shipping clerk — are some of the functions the federal government can be great at when it's run right. And getting supplies to emergency situations is considered one of its core jobs. Why else do we have a massive "Defense Department" if it can't help defend us from this kind of cataclysmic threat?

And when the states did try to get the supplies they need on their own, they ended up competing with each other and driving up the price.

"It's the wild, wild west out there in terms of procuring those masks, the shields, the glove sets," said California Gov. Gavin Newsom. He even raised the idea of states banding together so they wouldn't compete with each other — a good idea, but one that would be totally unnecessary if the federal government did its job.

But Trump has tried to push the responsibility back on the states.

"The states have to stock up," Trump said. "It's like one of those things, they waited. They didn't want to spend the money because they thought this would never happen."

This line of argument is ridiculous, and it only serves to distract from Trump's own failures. The federal government, which its ability to run large deficits, is much better suited to preparing for disasters than states, which face strict budget constraints. But Trump didn't attend to pandemic preparedness at all in his first three years in office. He then refused, for whatever reason, to use the Defense Production Act early on in the crisis to obtain the needed equipment. And with its unmatched capabilities and intelligence services, the federal government could have been and was aware of the looming pandemic threat long before the states were. Instead of warning the states that they should be preparing in January, though, Trump said everything would be fine.

But he realizes this crisis isn't going away soon, and even when it eventually passes, it will leave lasting scars. That's why he wants us to forget it. That's why he wants to find someone else to blame — governors, Obama, the Chinese, the World Health Organization — even when he repeatedly abdicated the core duties of his office, to deal with crises the states can't handle and to keep Americans safe.

He knows the election in November will be a referendum on his job performance, so he wants voters to think his role is as limited as possible. It's impossible to say now, of course, how these events will reflect on voters' final decisions and the outcome of the race. But "Keep America Great" may no longer work as a campaign slogan, and "I don't take responsibility at all" isn't much of a replacement.