This fake president must resign 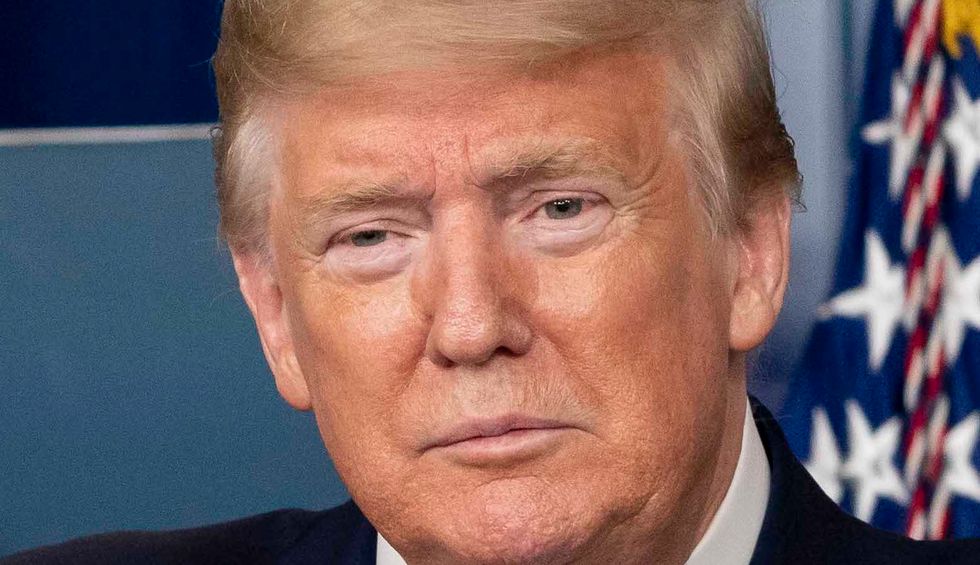 It appears that whatever luck America has regularly enjoyed has now run out since our worst president holds the office when our worst pandemic in a century is afflicting us.

In his daily Trumpaganza show, the president keeps saying that he is learning a lot. But given his chronic inability to process information, just what is he learning? Apparently to keep relentlessly returning to his basic formula of chest-beating, blame-shifting, and disinformation. Trump demands credit for any good news, refuses any responsibility, whines that he's the victim of mean governors/media/China/W.H.O./Democrats, churns out false promises and conspiracy theories (e.g. Hero nurses slipping ventilators out the back door? Really?) yet never seriously rallies the country behind a national plan entailing short-term sacrifice and struggle. He's no Winston Churchill, nor even the Queen of England based on her inspiring remarks last week.

Now it's largely too late to cabin the virus given his wishful thinking for two months between mid-January through mid-March and lost trust after a lifetime of lies. A person who thinks he can get away with altering the weather with a sharpie won't have the trust necessary to defeat this invader.

Trump's one reliable focus has been on his reelection image as a self-proclaimed "war-time president." Yet instead of a Dr. Win-the-War, as FDR was famously called for his skill at projecting both candor and confidence, we get a smiley-face Dr. Pangloss straining two weeks ago to issue an "all clear" for the economy by Easter Sunday...until doing a 180° after seeing overwhelmingly negative polls. He then quickly implied that any number of fatalities less than 240,000 would vindicate him in November, appearing to move-the-goal posts in the hope of scoring at least a field goal by Labor Day. "In what circle of hell," asks Susan Rice, "is that a good outcome?"

While a lawful president thanks to the Electoral College, Trump is at the same time a fake president who simply lacks the tools to do the job, even if he wanted to. In our book—Fake President: Decoding Trump's Gaslight, Corruption, and General Bullsh*t—Ralph Nader and I wrote that he was hopelessly inexperienced, erratic, without empathy, messianically vain, ignorant about history and policy and serially serially corrupt, an epic lack of character that didn't seem to undermine him in real estate or on Reality TV.

But then came the coronavirus. It exposed him as poseur president whose awful personal traits pushed him, predictably, toward awful decisions. Adding to that was the force multiplier of a reactionary GOP that glorified Ayn Randian rugged individualism over MLK's community values. So now at the worst time, Republicans have embraced Ronald Reagan's jibe that "the worst words in the English language are: I'm from the government and am here to help."

This combination of pathologies has meant that nearly every judgment call that he's made on the coronavirus has been wrong, late, reversed, or partisan. He was too slow to take early action, for example, and then too quick to try to declare "mission accomplished." It's hard to see how Trump could have done much worse—yet he did. His one reiterated bragging point was that he banned travel from China on January 29, except 400,000 travelers arrived here from China the next two months.

Were Trump a cabinet secretary, doctor or waitress, he'd be long ago fired for gross incompetence.

Can his familiar PR tricks now help cover up his blunders to enough voters, as they did with the Mueller and Impeachment crises? So we are daily subject to some of his favorite tricks—cherry-picking data, repetitiion, anecdotage, magical thinking (hydroxychloroquine will save us), adjectives as facts ("we're doing a great job"), shameless lying when cornered ("I felt it was a pandemic long before it was called a pandemic," he said after assuring everyone it would quickly go to "near zero"). Fool us once shame on you, fool us twice... When an eventual 9/11-like bi-partisan commission does an after-report on Trump vs. the Coronavirus, it will likely agree with extensive, parallel investigations by The New York Times and Washington Post—viz., that the 70 days after the pathogen was spotted were dominated, according to the Post, by "denials, delays and dysfunction."

When the rates of infection and death in blue California and red Florida are eventually compared—and South Korea compared to America (each had its first case January 22)—it's likely that the slower responding entity will be at least two times worse off. We'll know the final number by year's end but this would mean 50,000 Americans died because a fake president, with access to the best science in the world, chose instead to over-emphasize the Dow, election year polls, and a trade pact with China.

Already U.S. infections and deaths are spiking at a rate faster than any other country. And the worst is yet to come. No matter how often he blames "fake news" and gives himself a "10 out of 10," he's will not be acquitted by the verdict of history.

Now what? How can we best mitigate the coronavirus—and the Trumpvirus—to save our lives and the life of our 240-year experiment in self-government? For the more the walls of reality close in on him, the more extreme his misjudgments will become. He, for example, is now itching a) to "open us the economy" by undermining state shelter-in-place orders and risk a second wave of deaths; and b) to reject mail-in balloting as a logical way around congregating at polling sites due to his evidence-free claim that it would hurt GOP prospects.

Since this heirhead of a president can't change, Americans have to change their president. We are paying far too high a price for his impulse to cater to his self-interest and not the public interest. Trump must get out, whether by the 25th amendment, resignation, or defeat.

The first is little discussed but as logical as it would have been for Woodrow Wilson after his stroke in 1919—whether due to physical or pathological reasons, neither Wilson nor Trump were able to compentently run the country. George Conway in The Atlantic and Jennifer Senior in the New York Times have done early, thoughtful pieces on whether he has the mental stability to govern. His bizarre actions have dismayed his science advisors and alarmed much of psychiatric professional society, 27 of whom wrote The Dangerous Case of Donald Trump "because mental impairment in office is a serious matter." All question whether his malicious narcissism disables him from telling the difference between right and wrong.

The 25th Amendment enacted in 1969, however, appears to be a non-starter since it requires vice-president Pence corralling a majority of his cabinet to order Trump to step aside because of incapacity, which is then subject to congressional review. That would be a very tall order since a grand total of one Republican member out of 253 voted to impeach.

Second, resignation also seems at first implausible, though not impossible. As Norman Cousins wrote, "no one is smart enough to be a pessimist." There are hundreds of data points pointing to his recurring negligence in office—how else to describe his anti-health efforts this month to end Obamacare for 20 million, deregulate safety standards for nursing homes (hot spots for COVID-19), repeal the last of Obama's regulations to fight climate violence (pollution weakening immune systems), and enact a rule making it harder for the government to use scientific studies. During a pandemic?

To those who respond that Trump would never resign, recall that Richard Nixon too was seen as a tough SOB who had a 61 percent mandate—not one of  46 percent. As for Michael Pence then becoming president, well, at least he doesn't appear to be clinically unstable—craven being a different problem—and would presumably govern as a mainstream conservative until the election.

Say the virus doesn’t wilt in the summer heat but instead leads to tens of thousands more avoidable deaths that plunge Trump's polls toward Carter and Nixon levels—might family and friends stage an intervention? Could they remind him that he's mortal, overweight, under great stress, and risking their commercial brand "Trump" for decades? "Mr. President [or Daddy], it's far better to resign citing health concerns, framing your successes, and leaving on your feet rather than your knees... and certainly better than losing big to Biden, which in fact could easily happen. And remember, you'll always be 45."

This is worth imagining and pursuing. Failing prime ministers, military leaders and CEOs resign in other societies. As the consensus grows that Trump's a clear and present danger to our health and democracy, any spark—disclosure of tax returns showing a conspiracy with Russia to launder the money of oligarchs, ignoring a court order, firing Dr. Anthony Fauci (as the president hinted at just yesterday)—could provoke a public outcry that he get out. That mobilization would need to reach a critical mass of editorial boards, governors and mayors, civic and religious leaders, local grassroots groups (led by Public Citizen), millions (safely) marching and petitioning, perhaps even some GOP officials who'd rather run with the mild-mannered Pence than a poisoned chalice like Trump. If you were a Senate Republican up for reelection this Fall in close races—like Mitch McConnell and Lindsay Graham—wouldn't you?

In any event, presumably there will be a national election on November 3. Of course the Democratic ticket is no sure bet, especially since our election process is pockmarked by gaping flaws, from the electoral college to widespread voter suppression in swing states. Plus Trump may embrace the strategy of encouraging as many Wisconsin voting debacles as possible to later results. But while Trump has beaten back earlier crises, it will prove harder this Fall to blame his go-to scapegoats when he's been the only president in the three year run-up to the coronavirus... when he seems more excited by his high Nielson ratings than our high per capita mortality rates... and when his anticipated attacks this Fall against Hunter Biden won't remotely resonate with voters preoccupied with their families' safety. Saying "Burisma" as often as he said "her emails" will not erase the collective memory of so many neighbors and grandparents dying while he acted, in Kipling's deadly phrase, like a "shut-eyed sentry."

November may be our last clear chance to get off the road to authoritarianism and back on the path to democracy.

The only people who save us is us. With a cool appraisal of the odds and stakes, Americans need to figure out the best way to relieve our commander-in-chief of his miserable "wartime" command. Let's ditch our Captain Queeg. "The way the inevitable came to pass," wrote Oliver Holmes Jr., "was effort."