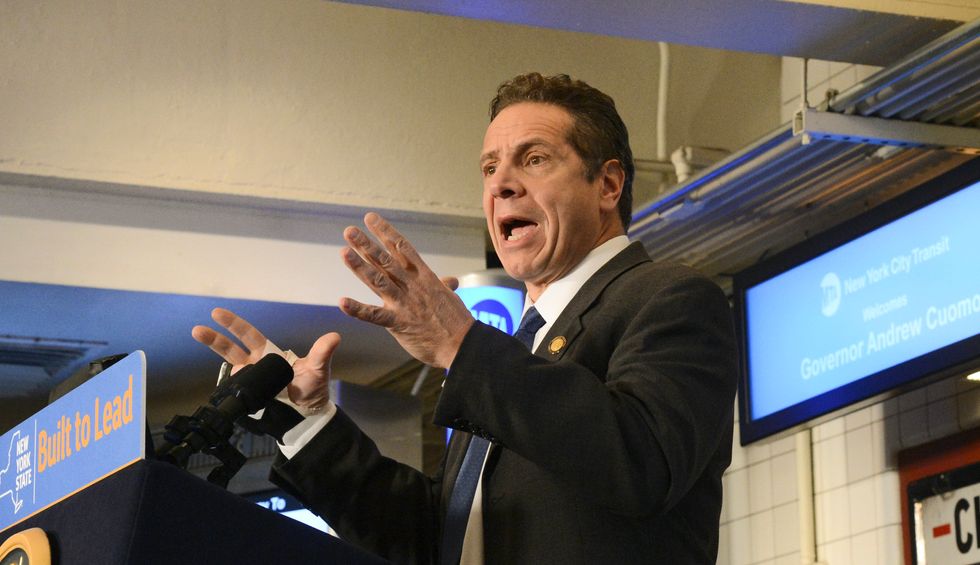 Given his incessant insecurities, it perhaps comes as no surprise that Donald Trump cannot (and, as time has proven, will not) stop talking about his “ratings.”

But, clearly, the few fonts of wisdom that exist within the walls of the Trump White House have gotten to him over the past handful of weeks. Despite his commanding the airwaves for hours per day with his COVID-19 “briefings,” poll after poll showed that voters across the nation, be they in red states or blue states, were far more likely to approve of the governmental responses to COVID offered by their governors than the response offered by the Trump administration. So, notably, we’ve seen his self-congratulatory tweets largely go from poll numbers to TV ratings.

But we’ve seen another marked strategic shift. Over the past few weeks, Trump started very pointedly attacking governors who have been aggressive in utilizing measures such as “shelter-in-place” orders to try to contain the spread of the coronavirus. While it had occasionally popped up in his briefings, it reached its apex on April 17 with a series of utterly bizarre tweets that called for three Democratic-controlled states to be “liberated,” a move that one think tank specializing in domestic terrorism fears could act as a dog whistle for right-wing attacks.

On paper, this shouldn’t have been as big a shock as it was. Trump has made a political career out of covering up for his own failures by trying to wage war on others and deflect the damage onto them. When candidates that he lustily endorses eventually lose, it’s because they simply weren’t MAGA enough, after all. So, by declaring verbal war on governors (even, in some cases, Republicans who are working to bend the curve), Trump hopes to lift himself up off of the canvas by dragging the governors down.

Is it working? The early evidence is in, and the answer is: nope, not so much.

First, let’s stipulate something right off the bat: Trump’s COVID-19 response has always drawn a shockingly mild, if not negative, reaction from American voters. This is especially true when you compare him to other global leaders. Even our neighbor to the north, Canadian Prime Minister Justin Trudeau, who just limped out of an underwhelming reelection bid for his party last year, finds himself with a job approval rating as it relates to COVID-19 in the low 60s. Trump’s national numbers, meanwhile, have been decidedly mediocre: of the over 150 polls on the COVID crisis that have been conducted nationally, Trump has been under 50 percent approval in nearly three-quarters of them.

In FiveThirtyEight’s tracking of national polls, the most recent polling average for Trump on COVID-19 has been trending underwater, with approval at a tick below 46% and disapproval just over 50%. These are bad numbers, so bad that the only global leader doing consistently worse in terms of public opinion than Trump is Brazil’s Jair Bolsonaro, whose actions amid this crisis have regressed from merely odd to extraordinarily disturbing.

Meanwhile, we here at Daily Kos Elections have been tracking how voters believe their states have responded to COVID-19, a response which, not surprisingly, has often been more proactive and, frankly, more coherent in most cases than the Trump administration. We can then compare how voters grade their state governments vs. the Trump administration

The trend was apparent from the get-go, and had changed very little over the first full month of the “safer at home” measures employed by most states. By a substantial margin, voters approved of the performance of their governors during the COVID-19 crisis over the Trump response, and often by an outsized margin.

Taking every poll in our database (which dates back to late March), governors find themselves with a net approval on COVID-19 of 69%, as opposed to just 24% who stand in opposition. As we see on the right, virtually every governor polled since March, in states as blue as California and as red as Wyoming, saw their COVID-19 approvals running well ahead of their 2016-2019 gubernatorial election margins. This was true even in swing states. Consider Roy Cooper of North Carolina, who narrowly won election in 2016 and whose COVID-19 approval rating has ranged from the 60s to the low 80s.

Meanwhile, in that same time frame, in those same states, President Trump’s approval has been slightly underwater on COVID-19, with approval at 46%, and disapproval at 49%. Again, remember that this is a cross-section of states, a group that included deep-red states like Wyoming, Alabama, and Oklahoma.

What’s worse for Trump: unlike most of the Governors (Cooper of North Carolina being a notable exception), he has to stand for reelection later this year. If you look at the diagram to the right (expertly done by our own Daniel Donner), you’ll see a LOT of data points that lie below the diagonal line. The simple translation? Trump’s approval, both on COVID-19 and in general, lies below his 2016 margin of victory in a number of pivotal states.

For a guy who won election in 2016 by drawing the political equivalent of an inside straight, these kinds of seismic shifts, even if they are smallish in terms of raw numbers, could be pivotal come Election Day 2020. We saw a rather shocking example of that in data released earlier this week in Ohio, a state Trump won rather easily in 2016, but a state where a.) his COVID-19 approval and fav/unfav numbers were slightly underwater in a Baldwin Wallace poll, and b.) after showing him up narrowly in the previous month’s polling, the same poll found him fractionally behind Joe Biden in a state that would be comparably low on the Biden target list.

Given the disparity graphically depicted above as well as Trump’s chronic insecurities, it is perhaps not surprising that he suddenly turned to a somewhat incoherent but very direct attack on the governors.

So, has there been movement from the earlier polling? The short answer is: yes, but it might actually be marginally worse for the president than the governors he has taken to attacking with such gusto.

It’s still early, and the sample size is relatively small (with just 17 polls). But you can see some legitimate movement here.

The slight erosion of gubernatorial approval numbers on COVID-19 is not surprising on two counts. For one thing, it is not unreasonable to assume that as these various “safer at home” lockdown orders move into their second month, there will be some attrition in support among those who have grown weary of quarantine. For another, now that Trump has set his sights on the governors and his acolytes are generating astroturf protests in state after state, it stands to reason that some MAGA all-stars took the cue and now view their Democratic governor not as a responsible leader, but the autocrat in charge of a state desperately needing liberation.

But what is more notable is the trajectory of the COVID-19 approval numbers for President Trump. His numbers, while never good, have reverted close to his consistently mediocre job approval numbers, and are clearly lower than they were earlier in the crisis.

There are any number of reasons why this shift might be taking place.

It could be, as many have speculated, that Trump simply does worse when he is the center of attention (which might be the real reason why Trump very publicly mulled bagging his daily COVID-19 wankathons). I mean, it’s not often that someone in a position of national leadership has a moment of pure catastrophe in the way that Trump did last week with his … unique … suggestions about COVID-19 treatments. Trump can brag all he likes about how many people WATCH this daily dose of presidential wisdom (“better than The Bachelor!”). But it is quite obvious this constant attention is not earning him higher marks from the viewing public, whose estimation of his COVID-19 performance is sinking markedly.

A second explanation is that he has turned off moderates willing to give him a chance at the start of this crisis with his increasingly uneven and often incoherent public performances, as well as his combative approach to many state governors. After all poll after poll has shown that over a month into the crisis, voters are still very aware of the need for social distancing, and far more concerned about lifting measures too early as opposed to lifting them too late. Therefore, his “liberate!” rant last week might have lost him significant yardage with a persuadable audience.

If you break down some of the polling data by ideological group, the results are striking. In a poll released Monday by Siena in hard-hit New York, we see that Trump’s COVID-19 approvals have diminished substantially over the past month, from a 41/56 approval spread in March to just 34/65 now. But the main driver of that has not been partisan Democrats tired of Trump’s sniping. Indeed, their numbers couldn’t drop much more than they had, with Trump’s disapproval inching up from 79% to 83%. Where the dramatic shifts occurred were among independents (where disapproval of Trump’s COVID-19 response jumped from 52% to 66%) and, perhaps most notably, among Republicans (where disapproval of Trump’s COVID-19 response almost doubled from 15% to 27%).

Another plausible explanation is that it’s entirely possible that relying on a small network of partisans and extremists in his own White House, coupled with binge-watching Fox News, combined to give Trump an errant view of the landscape. After all, his rants against the governors were no doubt predicated on a belief that he could make the voters mad at them, rather than being mad at him. But look at the data.

Trump specifically attacked the governors of three states in his “liberate” tweets: Michigan, Minnesota, and Virginia. While we don’t have fresh data in Virginia, we can see that, in polls taken since the tweetfest, Minnesota Gov. Tim Walz is polling at 70% job approval, while Trump languishes at 40% in a state he nearly won in 2016. Meanwhile, Michigan Gov. Gretchen Whitmer, who has arguably been the biggest and most consistent target of abuse from the president, had a statewide job approval of 63%, while Trump trailed far behind at 47%, in a poll conducted on behalf of … wait for it … Fox News.

Taken as a whole, the data indicates that we are, as we have been since the start of this crisis, largely relying on our governors for solutions to help the citizenry, and largely rolling our eyes at the enfant terrible who occupies the White House. Which, given the kind of assistance that the federal government could be providing with competent leadership, is a huge net loss for the country. But it also could prove to be a huge net loss for Trump politically as the 2020 election year heads into the summer.