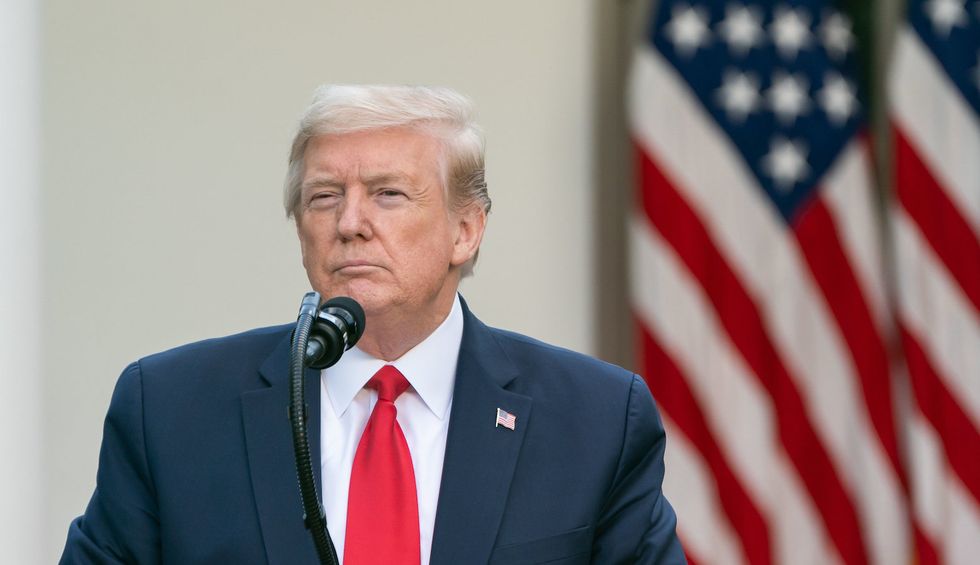 As November nears Trump will continue to bombard us with a dizzying array of statistics that he hopes will demonstrate how great a job he and his administration are doing. We do the most testing in the world. We’re making the most ventilators. We build the most hospital beds. And we will soon again have the best economy in the history of the world.

But there are two numbers Trump can’t explain away: total deaths and job loss.  He and his handlers had hoped that the final toll would follow from the University of Washington’s Institute for Health Metrics and Evaluation model which now predicts 74,073 deaths by August 1. But as of April 28th, we have already suffered more than 56,000 deaths. Unfortunately, in less than a month, the body count is likely to surpass the updated IHME prediction.

What is likely to be the final tally?  No one knows, of course. Maybe there will soon be a medicinal treatment. Maybe an effective vaccine will rapidly appear. Maybe summer and sunlight (even without injecting Clorox and chloroquine) will help more than expected.

But barring such fortuitous breakthroughs it would be wise to pay close attention to the sobering estimate put forth by Dr. Micheal Osterholm, the founder of the University of Minnesota’s Center for Infectious Disease Research and Policy. The math is simple and terrifying:

There are 320 million people in the United States. If half of them get infected in the next 6 to 18 months, that’s 160 million people. The 50% rate of infection over the course of the pandemic is at the low end of my colleagues’ consensus on what we can expect to see given the infectiousness of this virus.

Based on what we know from Asia, from the European Union and from the United States, about 80% of these cases will have asymptomatic, mild or moderate illness but won’t need professional medical care. About 20% of infected people will seek medical care. That’s 32 million people.

Of those, about half will be hospitalized. That’s 16 million people. Of those who are hospitalized, about half will actually require some form of critical care. That’s 8 million people. About 0.5 to 1% of the total number of 160 million infected people will die. So you have the possibility of at least 800,000 deaths in the US over the next 18 months. This is the number of deaths I’m expecting.

Let’s hope and pray we don’t get anywhere near there. But by Election Day, we may have suffered more than 100,000 U.S. dead, twice the number of Americans who died in the Vietnam War. It will be extremely difficult for Trump to spin away the horrific human cost.

In America, given our paltry income support systems and the lack of universal health care, job loss is a near death experience.  Even with massive amounts of short-term government checks to individuals and businesses, millions of the jobless are falling through the cracks while the money and tax breaks once again find their way to the super-rich.

While Trump’s proudly takes credit for the pre-pandemic 3.5 percent unemployment rate, he will soon claim NOT to be responsible for the Great Depression-like unemployment rates that are sure to come. He will continue to press to “liberate” the state economies and if it doesn’t happen fast enough he will blame the governors for the continued job losses. But that will be a very tough sell when the unemployment rates reach 15 to 20 percent or more. At that point virtually every family will be feeling the pain.

But here’s the rub. The economy, even when “liberated,” is not going to snap back very quickly. Until there’s a vaccine or an excellent treatment, most of us will be very reluctant to venture out into crowds. Job loss in all industries that rely on gatherings -- from baseball to bars to Broadway – will continue to suffer. It is certain that unemployment will come down much more slowly than it went up. The Congressional Budget Office predicts that the average unemployment for all of 2020 will be 11.4 percent and for 2021 still 10.1 percent, which is higher than the peak during the Great Recession. Trump will rant and rave, but at this point there’s not much he can do about it. (Those rates may have been held down had the government decided to pay to keep everyone employed in their current positions, as is the case in several European countries. But that approach was far beyond the ideological limits of Trump and the Republican Party.)

To compound the problem it is possible (if not likely) that a second wave will take place as states rush to reopen the economy. If done without an enormous contact-tracing infrastructure, the virus deaths could accelerate again, leading to another shutdown and more job loss.

Death and unemployment should mark the end of the Trump administration as well as Republican control of the Senate. The only thing that can save them from a massive defeat is if the Democrats shoot themselves in the foot, something each of us can well imagine.

Except for the Forever Trumpers, the rest of the world understands that our president simply does not have the necessary array of mental and emotional capacities to manage this crisis. It’s now up to Biden and the Democrats to show that they can.

Les Leopold, the director of the Labor Institute in New York is working with unions, worker centers and community organization to build a national economics educational campaign. His latest book, Runaway Inequality: An Activist's Guide to Economic Justice (Oct 2015), is a text for that effort. All proceeds go to support this educational campaign. (Please like the Runaway Inequality page on Facebook.) His previous book is The Looting of America: How Wall Street's Game of Fantasy Finance destroyed our Jobs, Pensions and Prosperity, and What We Can Do About It (Chelsea Green/2009).