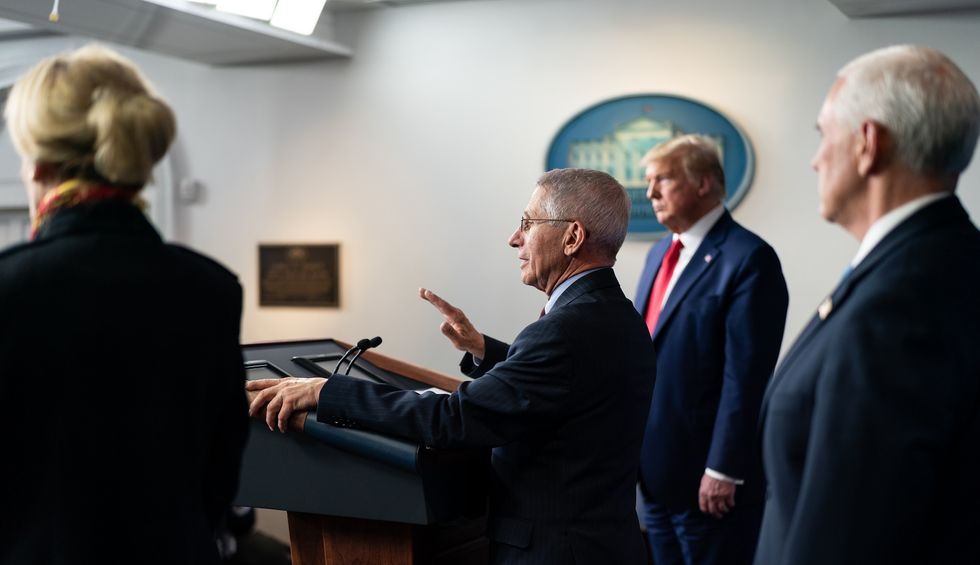 In the best-case scenario, the Trump administration's coronavirus task force now believes at least 100,000 Americans are likely to die. Even if the country does its best to adopt social distancing measures, they say, the high-end fatality estimate reaches 240,000 deaths.

This is a dramatic shift for the administration to take. It began over the weekend, with Dr. Anthony Fauci acknowledging that 100,000 to 200,000 people were likely to die. But just last week, Trump was warning that the "cure" — social distancing — could be worse than the "problem." The "problem," of course, is that the epidemiologists believe coronavirus could kill more than two million Americans, if not mitigated. Trump said last week he wanted to end social distancing guidelines prematurely and reopen the country by Easter, a proposal he ended up abandoning as he extended federal guidelines until the end of April.

But in a press briefing on Tuesday to discuss these projections, the members of Trump's task force, including Vice President Mike Pence, Dr. Deborah Birx, and Dr. Anthony Fauci, didn't acknowledge that there had been a sudden shift in the administration's rhetoric, as led by the president. Of course, the president himself refused to acknowledge that he has done multiple flip-flops on the issue, repeatedly downplaying it, telling Americans they had nothing to worry about, that the problem would go away, that the case numbers wouldn't rise.

On Feb. 26, Trump said of the number of cases fo the virus detected in the United States: "When you have 15 people, and the 15 within a couple of days is going to be down to close to zero, that's a pretty good job we've done." And this is one of many, many instances in which Trump downplayed the threat, despite all that was known.

Now, he's shifting the goalposts. Trump once wanted us to believe that going from 15 cases to zero would show the administration had done a good job. Indeed, it would have. But now he and the rest of his team is telling us that the best we can reasonably hope for is that 100,000 Americans will die from the infection.

They should all be ashamed. Ashamed of the fact that they're not leveling with the American people about what's going on and the message the administration is putting out. Ashamed that they didn't loudly call out the lies about the virus — from Trump and his defenders — that many in the media called out for weeks in real-time. Ashamed that they couldn't do better to protect the American people from this threat.

Obviously, Trump bears the most blame. He is, after all, the president, and the ultimate responsibility for national security lies with him. And he also, quite clearly, has been the most dangerous force in the administration on this front, both in his neglect to better coordinate the federal government's response and his active disinformation campaign meant to conceal the severity of the crisis from the American people. And while Vice President Mike Pence hasn't been quite as wildly dishonest during this ordeal, he has relentlessly defended the president and given him excessive credit for putative "achievements" when none is due. He is a vital part of the president's scam on the American public.

But it's not just the elected officials who share in the same. When you're a part of a team, you share in its successes and its failures. Many look to Dr. Anthony Fauci, director of the National Institute of Allergy and Infectious Diseases, as one of the few voices of reason and steadiness within the administration on this issue. And he has, in fact, seemed to be pulling the president in the right direction all along.

Yet he has also been used to shield the president from criticism as he faces down his threat. And his failure to confront the president and challenge his lies more forcefully has made him, unfortunately, complicit in this charade. He had other options. He could have resigned in protest over the president's disastrous and mendacious performance; he could have been even more outspoken and dared the president to stop him. Perhaps, all things considered, he did the right thing by trying to play it down the middle, pulling the administration in the right direction even while tolerating Trump's duplicity. But every choice comes with a cost, and for Fauci, sticking by the president has cost him some of the stature he has rightly earned.

Dr. Birx, has, on the other hand, has been much more prone to offering disturbing displays of fealty to the president.

"He's been so attentive to the scientific literature and the details and the data," Birx said of Trump in a recent interview. "I think his ability to analyze and integrate data that comes out of his long history in business has really been a real benefit during these discussions about medical issues."

This was clearly nonsense. Trump is notoriously averse to detail and has shown a tenuous understanding, at best, of science. Birx was simply stroking Trump's ego. And at other points, she has sought to downplay the severity of the crisis, dismissing reports that hospitals would have to make hard decisions about rationing ventilator care. And she bizarrely spun and cherrypicked numbers to paint a rosy picture of the pandemic's spread in the United States, even as case and death rates skyrocket.

Now, after standing with the administration during the president's disinformation campaign, Birx is telling the American people that they must accept that at least 100,000 people are likely to die from this virus. And she's urging that community's pull together — as they must — and embrace painful social distancing measures to ensure that the numbers aren't far worse.

Others, too, share in the blame. Health and Human Services Secretary Alex Azar, CDC Director Robert Redfield, FDA Commissioner Stephen Hahn and more are all a part of this.

Americans should and must comply with the public health expert's recommendations for the sake of the lives on the line. But where is the apology from the task force that was meant to prevent this?

The people of the United States will have to accept the facts, whatever they are. But they shouldn't be expected to just shrug when the people who were tasked with managing this crisis, who put up with, enabled, or engaged in a vile disinformation campaign about the virus, tell us that hundreds of thousands of our neighbors and loves ones will die. They shouldn't be forced to sit at home while no one takes any ounce of responsibility for this colossal, world-historical failure, — up to and most especially the president himself.