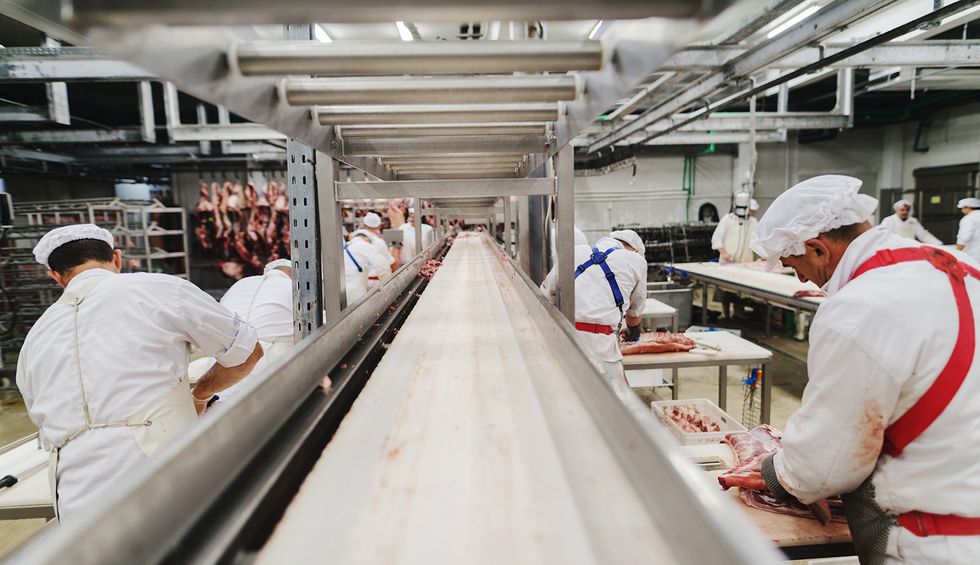 On April 12, Smithfield Foods CEO Kenneth Sullivan announced that the Smithfield Pork plant in South Dakota, which is one of the largest producers of pork in the world, would be closing “indefinitely” due to an outbreak of COVID-19. A couple of days later, it came out that of the surge of 1,000 new confirmed COVID-19 cases in South Dakota, 644 were directly from the Smithfield plant in Sioux Falls.

Reports have begun to come to light showing that the pork producer might not have been managing the safety of its facilities as well as it should have. Smithfield Foods, with an assist from Republican Gov. Kristi Noem, is striking back, using the oldest conservative weapon in the book: bigotry. BuzzFeed News reports that a Smithfield spokesperson did some damage control, saying that management really didn’t know what they could have done differently. In fact, it is hard to say since the the plant had a “large immigrant population.” According to the news, the spokesperson made sure that (white) people understood what she meant: “Living circumstances in certain cultures are different than they are with your traditional American family.”

Gov. Noem went on Fox News last week to talk about the Smithfield Pork plant closure and explained that this issue is cultural, not management’s fault, and definitely not her fault for refusing to enact stay-at-home orders, saying: “We believe that 99% of what's going on today wasn't happening inside the facility. It was more at home where these employees were going home and spreading some of the virus because a lot of these folks that work at this plant live in the same community the same building sometimes in the same apartment.”

As a side note, Gov. Noem then went on to blather about how she was “on offense” by having South Dakotans participate in the first human trials of Trump’s “game changer” drug, hydroxychloroquine. The largest research study on this drug to date shows that patients treated with the drug had a higher mortality rate than those not treated with the drug. Literally the opposite result of the one we’re looking for.

Smithfield Foods does not only operate in South Dakota. They have factories in other states as well, including their Patrick Cudahy factory in Wisconsin. On Sunday, The Intercept reported that workers at the Cudhay, Wisconsin plant—who saw an outbreak of COVID-19 at their plant a couple of weeks ago—believed that management had tried to hide the outbreak while keeping workers in unsafe conditions. According to the report, workers who asked for protective masks were denied with responses like giving one worker a mask would mean needing to “have to do it for everyone else.”

BuzzFeed reports that similarly weak responses to the spreading pandemic existed at the Sioux Falls plant. According to the report, after the first confirmed case leaked out, workers saw health and safety flyers put up in a few places of the facility. But as Smithfield Foods has already said, they have a very large immigrant, English-as-a-second-language workforce at the plant, and the flyers were reportedly all in English, even though “safety notices at the plant are usually translated into as many as five languages.”

Then management offered up free lunch—supposedly a very rare bonus. It seems that the “gesture” on the part of management was an attempt at boosting morale and incentivizing workers to continue coming in. Unfortunately, guaranteeing that your entire workforce will all put things from their hands into their mouths in the same space is poorly thought out public health and safety management.

One very important note here is that Smithfield, while closing down plants in three states, also announced last week that it would be providing about $2,500 to each of its 40,000 workers who are now having to stay home. Smithfield Foods called the fund the “Responsibility Bonus.”