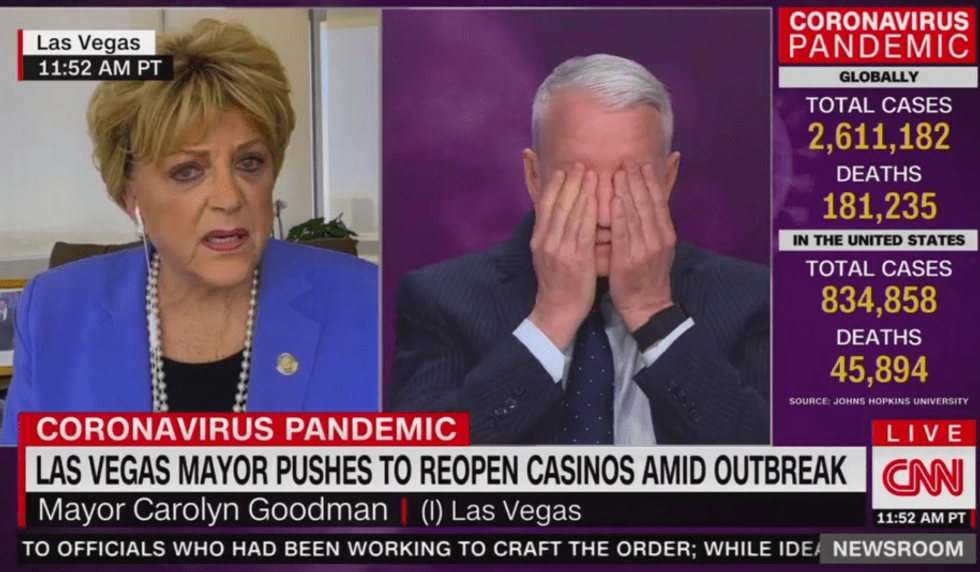 Las Vegas Mayor Carolyn Goodman made headlines on Tuesday and Wednesday as she called the closing of businesses due to the COVID-19 pandemic “insanity.” In an interview with Las Vegas’ local NBC affiliate News 3, Goodman wondered aloud whether we stop driving just because we have vehicle accidents. Asked how and when Las Vegas should “re-open,” Goodman told the news station that she would allow private businesses to open if they wanted to because that would mean those private businesses “had a plan” on how to reopen. “And if your business has too many cockroaches on the floor, then you aren’t going to have any business.”

Yup—the interview continued on exactly as coherently as that. Mayor Goodman brought this conservative no-plan, no-ideas approach to CNN in an interview with Anderson Cooper Tuesday night. Cooper tried to get Goodman to explain what her plan was, and the results were … something to watch.

Cooper acknowledged the devastating economic toll stay-at-home orders are having on Las Vegas’ economy. But what exactly was Mayor Goodman’s plan for keeping people safe while reopening Las GODDAMN Vegas while this pandemic was raging around the country, with no therapeutics or vaccines in sight? Explaining that if she was a hotel or casino owner (“I wish I were!” she chirped), she would “have the cleanest hotel, with six feet figured out for every human being that comes in there.”

Without screaming, Cooper (to his credit) attempted to walk Goodman through the logic of her … idea.

ANDERSON COOPER: So, if you can’t figure out how to do this safely why, as mayor of a city that you are responsible for people’s safety, are you calling for something that you have no plan for how it would be done safely?

Dumb and confident is a toxic mixture, and Goodman seems have gallons of both in her gas tank.

MAYOR CAROLYN GOODMAN: I am not a private a private owner. That’s the competition in this country. The free enterprise. The free enterprise to be able to make sure what you offer the public meets the needs of the public. Right now we are in a crisis, health-wise, and so for a restaurant to be open or a small boutique to be open, they better figure it out. That’s their job, not the mayor’s job.

Now, that’s leadership! Cooper then attempted to repeat back to Goodman what she had just said to the world on television. He then asked her about an earlier interview where she said the same thing, but explained that the free market would clear out bad businesses who let people get sick. Cooper asked Goodman if she stood by the statement. She said she did, and then Cooper tried to explain that it would take weeks before it became evident that a specific business and location had “become an epicenter” for the virus—and by then it would obviously be too late for many, many people.

Goodman had a great reply to that: ”I am not going down that road.” Cooper said he was just repeating what she said, to which Goodman said it was Cooper’s “opinion” of what he thought she was saying. You cannot make this up.

At another point in the interview, Goodman explained more clearly that she thinks she knows what she’s asking of her citizens, and that she also doesn’t understand science or how math and the virus work. She explained that while it is sad that people are dying from this virus, there are a lot of people that haven’t gotten sick or died from it yet. Cooper explained that there is a very good chance that the social distancing policies, like those in California and Las Vegas, have been the reason that Las Vegas has yet to see the terrible outbreak that places like New York City have seen. Hold on to your socks because Mayor Carolyn Goodman is full-on crazy pants about her ideas!

MAYOR GOODMAN: How do you know (that social distancing has worked), until you have a control group? We offered to be a control group. Anybody who knows anything about statistics knows—

COOPER: —You’re offering the citizens of Las Vegas to be a control group to see if your theory on social distancing ...

GOODMAN: —I did offer. It was turned down.

GOODMAN: No no no no no. Wrong. Absolutely wrong. Don’t put words in my mouth.

Goodman went on to explain how placebos work. It was mind-bending. Cooper asked whether or not she would be going to casinos every night if she was successful in getting Vegas reopened. After dancing around the question and then saying it would be silly for her to be at a casino, and why would he ask such a question, Cooper, fed up, explained exactly why it was a valid question.

COOPER: Because it would be putting your money where your mouth is.

The @mayoroflasvegas Carolyn Goodman should resign before lunch arrives today. She is an embarrassment to my hometown.
— Jimmy Kimmel (@Jimmy Kimmel) 1587581856.0

@mayoroflasvegas @andersoncooper @KatyTurNBC I have seen many Nevada officials stumble on national TV. But that was… https://t.co/64YcKVi728
— Jon Ralston (@Jon Ralston) 1587582359.0

Goodman was on MSNBC with Katy Tur earlier, and gave this fact-free explanation of her worldly opinions.

Here’s a glimpse of the kind of leadership that wants to “reopen” our country.