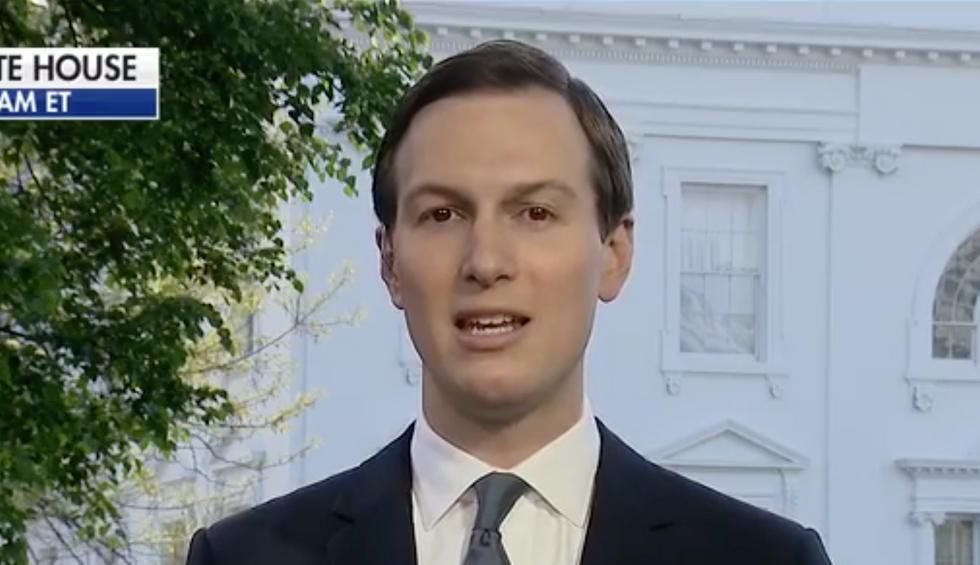 Jared Kushner cheered his own work as part of the White House response to the coronavirus pandemic as "a great success story" during an appearance on President Donald Trump's favorite morning show as confirmed cases passed 1 million in the U.S.

"We're on the other side of the medical aspect of this," Kushner, who has no previous medical experience, told the co-hosts of "Fox & Friends" on Wednesday.

"We've achieved all the different milestones that are needed. The federal government rose to the challenge," he added. "And this is a great success story, and I think that's really what needs to be told."

The watchdog group Citizens for Responsibility and Ethics in Washington (CREW) announced hours later that it had sent a letter to the independent Office of Government Ethics calling for an investigation into a shadow coronavirus task force run by Kushner after members appeared "to have violated federal conflicts of interest and transparency laws."

Despite the bleak new milestone for the country which has recorded the largest number of cases worldwide, Kushner painted a rosy picture as he predicted a "rocking" economy.

"I think you'll see by June a lot of the country should be back to normal and the hope is that by July the country's really rocking again," Kushner continued, knocking "the eternal-lockdown crowd" for "making jokes on late-night television."

Kushner's predictions directly conflict with those of the nation's top infectious disease expert, who recently cautioned that a return to normalcy would not be the same as turning on a "light switch."

"In many respects, it would be, you know, anywhere from presumptuous to impossible for me to say, 'This is what's going to happen in June,'" Dr. Anthony Fauci, head of the National Institute of Allergy and Infectious Diseases, told ABC News' David Muir earlier this month. "We don't know. It's really going to depend on what happens with the virus, as we pull back on mitigation."

Though infection rates have begun to decline in hotspots such as New York and New Orleans, they are on the rise in rural states. Public health experts, including those on the official White House task force, have repeatedly cautioned against attempting a return to normal before tests, contact tracing and a vaccine are readily available.

Eager to draw on Kushner's private-sector experience, which includes operating both a beleaguered newspaper and a beleaguered family real estate empire, the administration solicited his help in early March at the behest of Vice President Mike Pence's chief of staff Marc Short.

Critics on of all political stripes have blasted the administration's bungled response for months, pointing to a failed testing rollout, a dangerous dearth of medical equipment and the president's own statements, which included floating a bizarre and dangerous idea to "inject" disinfectant into coronavirus patients.

In terms that recall the "irregular" Ukrainian diplomatic channel that took its cues from Rudy Giuliani, officials refer to Kushner's group as a "shadow" team that operates parallel to official administration health agencies, including the National Institutes of Health and Centers for Disease Control.

"We don't know who these people are," an official told The Post. "Who is this? We're all getting these emails."

Dr. Deborah Birx, the White House coronavirus response coordinator, called his role "essential" but others have been less charitable. For example, the comedian John Oliver called the president's son-in-law a "f*cking moron." (Oliver is likely an intended target of Kushner's remarks dismissing "the eternal-lockdown crowd" that would "make jokes on late-night television" about him.)

The U.S. recently passed South Korea in tests per capita, but the country needs to build on those numbers significantly before it can begin rebooting the economy in earnest, according to both experts and the White House's own guidance.

"I'm very confident we have all the testing we need to start reopening the country," Kushner told "Fox & Friends," claiming that states now have "excess capacity" for testing.

"What you must be able to do is to have in place the capability of rapidly identifying by testing, getting someone who's infected out of the circulation, obviously taken care of if they need medical help if they could be handled at home, do contact tracing, do it in an efficient way where it means something," Fauci told ABC News. "Not contact tracing many, many, many days after an individual actually is exposed."

A recent report by Harvard University bio-ethicists indicates that the U.S. needs to be testing 20 million people a day for a safe and large-scale reopening by the summer.

"Somebody asked me why [testing] took so long," Kushner said. "I actually said, 'You should look at how did we do this so quickly.'"

You can watch the segment below via Fox News: