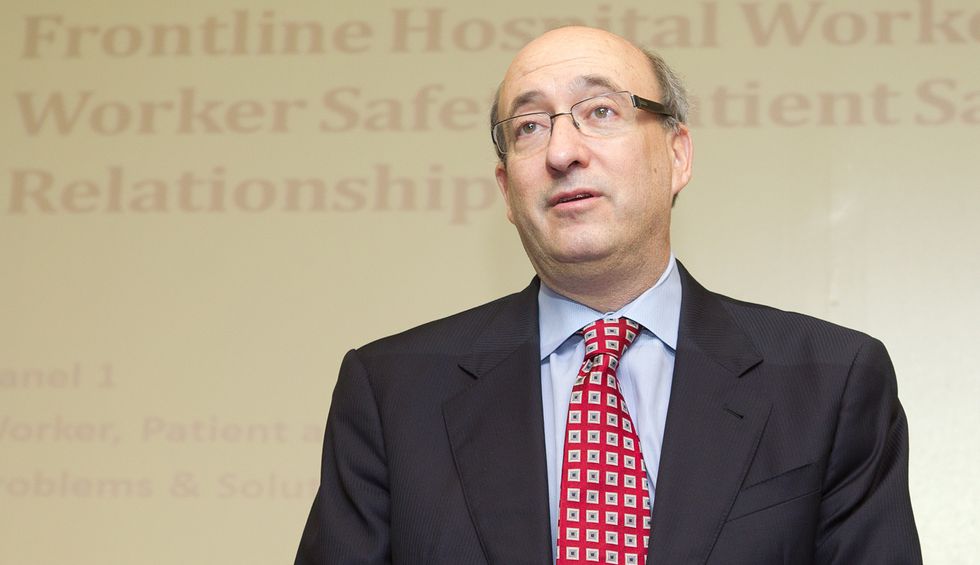 25 October 2012 - Washington, DC - Assistant Secretary for Occupational Safety and Health Administration (OSHA) David Michaels speaks to a group gathered to discuss Frontline Hospital Workers and the Worker Safety/Patient Relationship. Dr. Michaels was introduced by Georgetown University professor Rosemary Sokas. ***Official Department of Labor Photograph*** This official Department of Labor photograph is being made available only for publication by news organizations and/or for personal use printing by the subject(s) of the photograph. The photograph may not be manipulated in any way and may not be used in commercial or political materials, advertisements, emails, products, and/or promotions that in any way suggest approval or endorsement of the Secretary, or the Department of Labor. Photo Credit: Department of Labor
Jake Johnson
and
Common Dreams
April 12, 2020

President Donald Trump's Labor Department has quietly issued guidance informing most employers in the United States that they will not be required to record and report coronavirus cases among their workers because doing so would supposedly constitute an excessive burden on companies.

The new rules, released Friday by the Occupational Safety and Health Administration (OSHA), were met with alarm by public health experts and former Labor Department officials who said the new rules are an absurd attack on transparency that could further endanger frontline workers.

Because COVID-19 is officially classified as a recordable illness, employers would typically be required to notify OSHA of coronavirus cases among their workers.

The Trump administration's new regulatory guidelines state that—with some exceptions—employers outside of the healthcare industry, law enforcement and firefighting, and corrections will not be required to report coronavirus cases among their employees because companies "may have difficulty making determinations about whether workers who contracted COVID-19 did so due to exposures at work."

"This enforcement policy will help employers focus their response efforts on implementing good hygiene practices in their workplaces, and otherwise mitigating COVID-19’s effects, rather than on making difficult work-relatedness decisions in circumstances where there is community transmission," the guidance states.

David Michaels, who served as head of OSHA between 2009 and 2017, expressed astonishment at the new rules on Twitter.

"So all you infected bus drivers, grocery store clerks, poultry processors—you didn't get it at work," Barab tweeted.

When a Twitter user speculated that the move could be designed to "let worker's compensation insurance carriers off the hook, so that the suffering worker bears more of the expense for treatment," Barab responded, "And, of course, employers who pay workers comp premiums."

As HuffPost's Dave Jamieson reported Saturday, "if employers don’t have to try to figure out whether a transmission happened in the workplace, it could leave both them and the government in the dark about emerging hotspots in places like retail stores or meatpacking plants."

"The announcement is part of an ongoing fight between the Trump administration and occupational safety experts who say OSHA is failing to fulfill its obligations under the president," Jamieson noted. "Employer record keeping has been a key issue in that spat. Early in his presidency, Donald Trump loosened the recording requirements employers must follow, a move critics said would make it easier for companies to fudge their data and hide their injuries."

OSHA just told most employers that if their workers get sick with COVID-19 they don’t have to figure out if it happ… https://t.co/lB6wTNPKJ1
— Dave Jamieson (@Dave Jamieson)1586620751.0

OSHA's updated rules come as the Trump Labor Department, headed by former corporate lawyer Eugene Scalia, is facing growing backlash over its business-friendly handling of the new coronavirus stimulus law. In recent guidances, Scalia has scaled back paid leave provisions and limited who can qualify for expanded unemployment benefits as the coronavirus outbreak continues to cause unprecedented mass layoffs across the nation.

The Washington Post reported Friday that Scalia is also facing internal criticism over his management of OSHA during such a critical moment for workplace safety.

"The CDC has issued recommendations for the public and businesses to follow practices such as social distancing and sanitizing workstations. OSHA could make those guidelines mandatory for all employers or for all essential employees but has not done so," the Post reported. "Under Scalia, OSHA has also decided against issuing safety requirements to protect hospital and healthcare workers, including rules that would mandate nurses and other providers be given masks and protective gear recommended by the CDC when at risk of exposure."