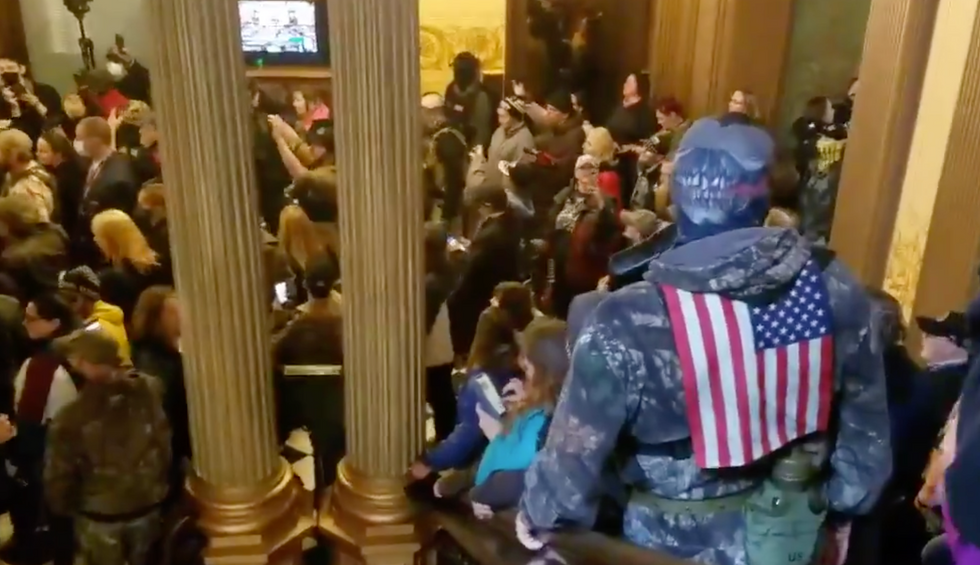 The right-wing movement against public health measures designed to stave off the coronavirus pandemic escalated on Thursday as armed gunmen were among those who stormed the Michigan state house and tried to enter the legislative chamber.

The protesters entered the building after holding a small rally outside the State House in Lansing, calling for an end to Democratic Gov. Gretchen Whitmer's stay-at-home order in accordance with guidance from public health experts due to the coronavirus pandemic.

The so-called "American Patriot Rally" was organized by the recently-formed group Michigan United for Liberty and came two weeks after a similar protest dubbed "Operation Gridlock" created a traffic jam outside the government building.

Some demonstrators on Thursday wore "Make America Great Again" hats, while others carried firearms into the Capitol building. It is legal to carry a visible weapon in Michigan.

"You aren't allowed to bring in posters to the Michigan State Capitol, but you can bring guns and rifles," wrote progressive activist Linda Sarsour.

The protesters demanded to be let into the state House chamber, where the Republican-controlled legislature was debating an extension of Whitmer's emergency order, which is due to expire at the end of the day Thursday. The lawmakers eventually adjourned without extending the order.

Democratic State Senator Dayna Polehanki posted photos of armed men with long guns in the public gallery above the floor:

A number of progressive advocates noted that racial and economic justice demonstrations have been met with force in recent years, while the crowd of largely white and pro-Trump protesters was permitted to force their way into the Capitol building with weapons.

I got tear gassed protesting right to work for less being passed in Michigan while completely unarmed and being com… https://t.co/DG51Elbq03
— Randy Bryce (@Randy Bryce) 1588276017

The protest—during which one speaker compared the crowd to civil rights leaders including Rosa Parks and Dr. Martin Luther King, Jr.—came as the advocacy group Progress Michigan released poll results showing the majority of Michigan residents oppose protests like the American Patriot Rally and Operation Gridlock.

Only 25% supported the anti-Whitmer protests, and 56% opposed them.

"Once again, the polling shows that Michiganders support Gov. Whitmer's commonsense, science-based handling of the COVID-19 crisis," said Lonnie Scott, executive director of Progress Michigan. "Operation Gridlock protesters have made a lot of noise, but these numbers make it clear they're only a very vocal minority of our state."

The demonstration came a day after a state court ruled that Whitmer's stay-at-home order does not violate constitutional rights.

"Our fellow residents—have an interest to remain unharmed by a highly communicable and deadly virus, and since the state entered the Union in 1837, it has had the broad power to act for the public health of the entire state when faced with a public crisis," Court of Claims Judge Christopher M. Murray wrote.