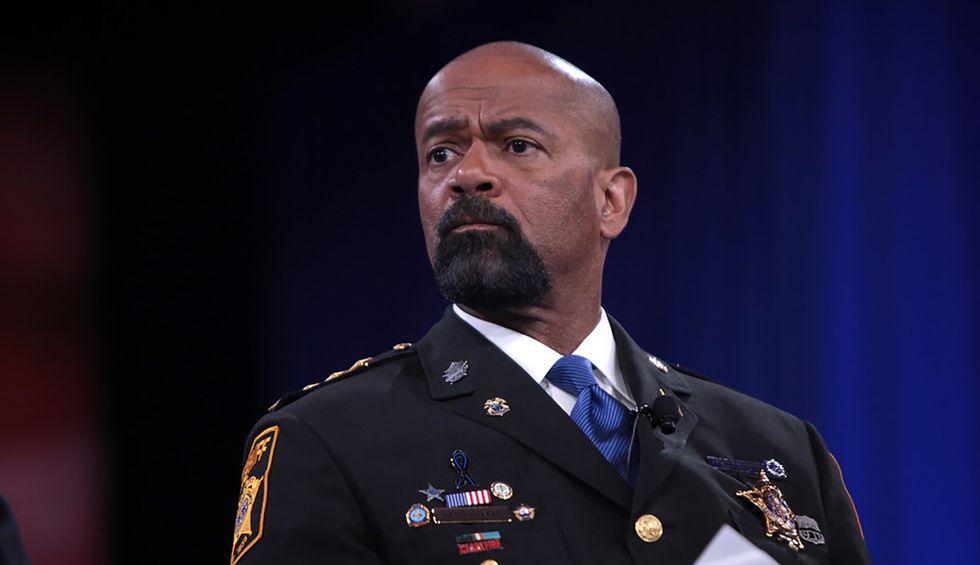 As the coronavirus pandemic goes from bad to worse and the worldwide death toll soars past 7,000, some far-right extremists continue to insist that the mainstream media are exaggerating the threat. One such extremist is Tea Party activist and former Milwaukee County Sheriff David Clarke, who is coming under fire for a barrage of unhinged coronavirus-related tweets — including one urging Americans to spend more time in public places. In fact, Twitter has removed some of Clarke’s tweets for promoting dangerous behavior.

One of the worst offenders was a tweet Clarke posted on Sunday, March 15, when he wrote, “GO INTO THE STREETS FOLKS. Visit bars, restaurants, shopping malls, CHURCHES and demand that your schools re-open. NOW! If government doesn’t stop this foolishness...STAY IN THE STREETS. END GOVERNMENT CONTROL OVER OUR LIVES. IF NOT NOW, WHEN? THIS IS AN EXPLOITATION OF A CRISIS.”

Twitter confirms it has taken down some of @SheriffClarke's tweets on coronavirus, citing a policy against encourag… https://t.co/YIxrRwFu3R
— Aaron Blake (@Aaron Blake) 1584378085.0

In separate tweet, Clarke posted, “We are AMERICANS. Past generations dealing with adversity, stared it down went after it. They were tough. After several decades of liberal wussification we have become SOFT. Now we panic and run in the face of adversity. We create a run on toilet paper."

One of the tweets found Clarke asserting that Americans should be worried about abortion rather than coronavirus. The former Milwaukee County Sheriff wrote, “The left tries shut anybody down who is not panicking over this FLU. They point to the death toll and say...don’t you care? I point to the hundreds of thousands of babies who die every year as the result of ABORTION and I ask the...DON’T YOU CARE?”

Never one to shy away from conspiracy theories, Clarke also wondered if billionaire George Soros is involved in what he views as an overreaction to coronavirus. Clarke posted, “Not ONE media outlet has asked about George Soros’s involvement in this FLU panic. He is SOMEWHERE involved in this.”

This is extremely dangerous. The CDC just recommended no gatherings over 50 people. This is going to get people kil… https://t.co/Z4QNED9x1U
— andrew kaczynski🤔 (@andrew kaczynski🤔) 1584317328.0

Twitter users have been quick to slam Clarke for encouraging Americans to put themselves at risk for contracting the deadly coronavirus. Journalist/author David Cay Johnston described Clarke as the “winner of the stupidest tweet of the week award — and there’s nothing else close enough for second place.”

Tommy Vietor, founder of Crooked Media, said in response to Clarke’s “visit bars, restaurants” tweet, “You are criminally stupid. Also, your hat sucks.” And Twitter user Jeff Tiedrich, @itsJeffTiedrich, told Clarke, “Do you have any idea just how ridiculous you sound?”

John Pavlovitz, @johnpavlovitz, said of Clarke, “You a special kinda stupid, ain't ya, cupcake?.... To be fair, you probably can’ even spell CDC.”

@SheriffClarke Are you still being paid by the Kremlin or was that only for your 2016 election cycle activities? Wh… https://t.co/Whcn6VOn6V
— Alexandra Chalupa (@Alexandra Chalupa) 1584317247.0

@SheriffClarke I’m definitely not taking public health advice from the guy who let inmates die of dehydration in his county’s jail!
— Dextrosity (@Dextrosity) 1584313815.0