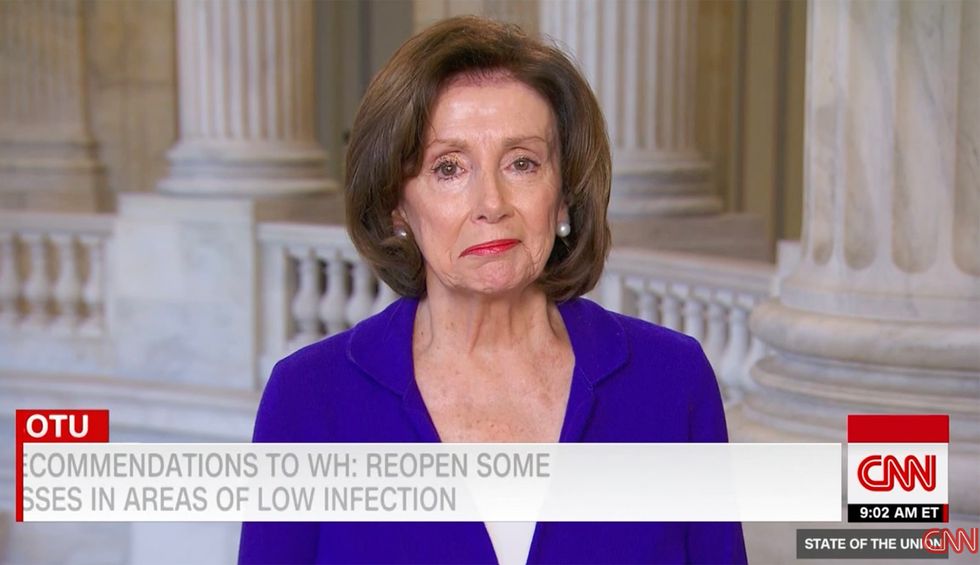 House Speaker Nancy Pelosi appeared on CNN’s State of the Union to speak with host Jake Tapper on Sunday morning. With a growing number of cases of the novel coronavirus in the United States, people are increasingly concerned; hospitals and clinics fear dwindling supplies, while some governors enforce shelter-in-place orders to try and flatten the curve. Low-wage and tipped workers, too, fear economic uncertainty—or weighing their own health and lives against a paycheck. All of this said it’s no surprise that the coronavirus is the main topic of the Sunday shows. It’s also not surprising that Pelosi isn’t splicing words when it comes to Donald Trump’s handling of the pandemic.

In the clips below, Tapper opens the exchange by asking Pelosi’s thoughts on Trump’s desire to “relax” social distancing guidelines for some parts of the nation. The question: Do you think he should?

Pelosi advised that we should be “taking every precaution” and that Trump’s “denial at the beginning was deadly.”

"I don't know what the scientists said to him,” Pelosi continued to Tapper, “when did this President know about this, and what did he know? What did he know and when did he know it? That's for an after-action review. But as the President fiddles, people are dying. And we just have to take every precaution."

Tapper asked Pelosi if she thinks Trump’s “downplaying” of the “risks” of the coronavirus for several weeks had “ultimately cost American lives?” Pelosi said yes. “Yes,” she replied, “I am. I’m saying that.”

"I'm saying that,” she explained, “because, the other day, when he was signing the bill, he said, just think, 20 days ago, everything was great. No, everything wasn't great. We had nearly 500 cases, and 17 deaths, already. And in that 20 days, because we weren't prepared, we now have 2,000 deaths and 100,000 cases.” Then the speaker continued and discussed the need for testing, more personal protective equipment, and the needs of healthcare workers.

In the now-viral clips, embedded below, Pelosi says what is on everybody’s mind at this point.

“This is such a tragedy. We don’t even know the magnitude of it because we don’t have adequate testing,” she added.