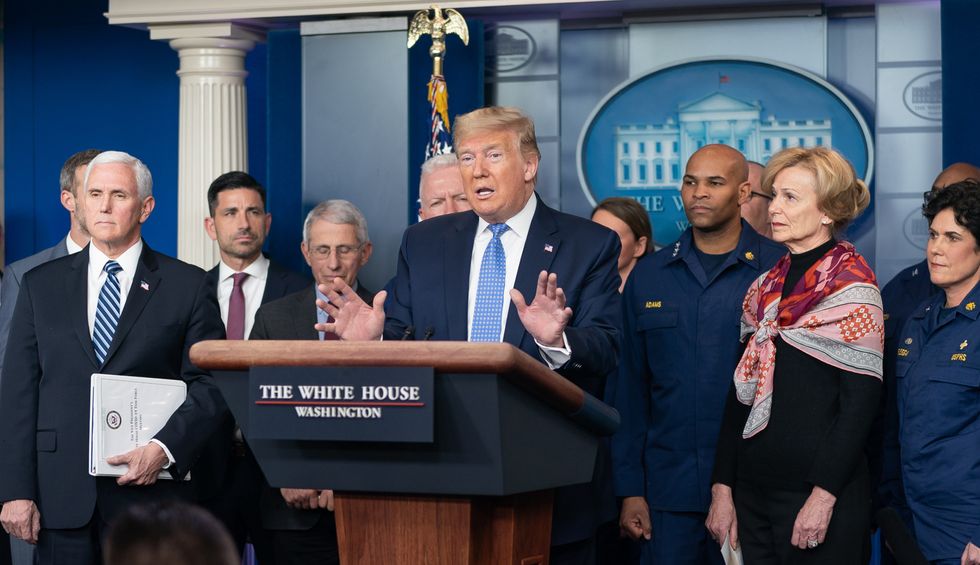 Like every other petty con man, from back-alley hustlers to Wall Street fraudsters, Donald Trump is a thief and he'll always be a thief. Now the president is clearly stealing from the George W. Bush playbook in one particularly awful way. Specifically, Trump appears to be desperately envious of Bush's approval polls after the terrorist attacks of Sept. 11, 2001, to the point of recently declaring himself to be a war president in the face of the global COVID-19 pandemic. And it could absolutely get him re-elected.

As of the past several days, Trump's been marketing COVID-19 as an "invisible enemy." He can't stop repeating the bellicose platitude that America is at war against the virus, even though he spent the first two months of this catastrophe telling us it was no big deal.

Yet during the Sunday edition of the Trump Show, the president said, "In a true sense we're at war." On top of not understanding the definition of "war" or "true," Trump is also struggling to present himself with a patina of unity and cooperation (which he and his people routinely contradict with obnoxious cracks and tweets about his political opponents), while conspicuously thanking "first responders," as in the days and weeks following 9/11.

The lead-up to the Iraq war in 2002 and early 2003 saw the Republicans pick up seats in Congress, while Bush was handily re-elected in 2004 due primarily to being a war president — that whole "don't change horses midstream" yarn. Trump is starving for some of that adoration now, and he'll steal whatever he needs to steal in order to get it. Why? It's what he does, and it's because he knows that if he loses in November, there's a reasonable chance he'll be indicted for one or more crimes. The stakes for the president, as well as Donald Jr., Eric, Ivanka and Jared Kushner, couldn't be greater. If winning means recycling the Bush-Cheney approach from the war on terrorism, he'll do it. He'll do anything.

Just in case American voters don't particularly buy into the notion of a faceless microorganism as a terrorist-like villain, the administration is sending out the word that the human enemy in this alleged war is China. Breitbart News and Donald Trump Jr. are accusing China of spreading disinformation about the virus — and even accusing the World Health Organization of being on China's payroll.

So if you're keeping score, the COVID-19 virus is Trump's al-Qaida, while China is Trump's Taliban and/or Iraq. In fact, I keep expecting Trump, during one of his daily Trump Show episodes, to crumple up a photo of COVID-19, throw it onto the ground, grab the nearest bullhorn and announce, "I can hear you, and the coronavirus will hear from all of us soon!" Cue the Lee Greenwood anthem.

In truth, this is a "war" in the same way Trump University was a "college."

Based on recent history alone, Trump knows that too many of us, the sucker demographic, will eat up his chocolate-fountain of nonsense with a giant Trump-branded ladle. It doesn't matter whether this is an actual war. Trump has to package himself as the bone-spurred generalissimo, wrapping himself in commander-in-chief powers, because while he understands very little about the so-called enemy, he at least understands that Americans tend to re-elect presidents who fight and win wars.

We don't need to worry that Trump will actually launch a fighting war against China. He's too much of a coward for that. In this case, though, he doesn't have to. This is nothing more than a PR war. All he needs to do is to declare China to be the enemy, repeat and repeat, then declare victory and stage a victory parade. At least 40 percent of us will suck it down like Trump Vodka. It'll all happen, irrespective of whether COVID-19 cases are on the decline. In fact, the president is already talking about lifting some of the isolation orders when his randomly-designated 15-day period is over, potentially worsening the spread of the virus. Reality, in this non-war war, is totally irrelevant, just as it's been totally irrelevant since Inauguration Day.

At risk of burying the lede, the X-factor in Trump's war plan, as it was during the lead-up to the invasion and occupation of Iraq, once again involves the cable news networks — yes, all of them — as well as the news divisions of the four major broadcast networks. News directors across the TV dial are, for reasons that confound logic, gifting the president with free airtime, live, every single day, to spread disinformation and brag about his self-proclaimed heroism and the fighting of a war he denied even existed a few weeks ago.

To be clear, the big four broadcast networks, including ABC, CBS, NBC and Fox (proper), are interrupting regular programming to do this. It's not just the cable networks.

It would be one thing if these news conferences were delivering actual news, but a good 90 percent of the Trump Show is nothing but gratuitous fluffing of the president's brittle ego; Trump inventing non-facts about medicine and the virus, such as urging people to use untested meds; and, of course, a few minutes in which the pre-pandemic Rally Trump appears, complete with "Chinese virus" dog-whistles and the like, reassuring his bigoted fanboys that their TV-crush is still there for them.

Of course the TV news people know this, and they're letting him get away with it by continuing to air these ass-kissing sessions like actual news. It's not news, and airing it live needs to stop, now. Remember those empty-podium shots during the 2016 election, the ones that preceded the live airing of Trump's rallies nearly every day? It's happening all over again, now, during this election cycle. This is how Trump will win again.

A few weeks ago, I mentioned the electoral model formulated by political scientist Rachel Bitecofer, who has forecast that 2020 will be another wave election for the Democrats, barring any "shocks to the system." Well, system? Meet shocks — every day for at least an hour, while American TV viewers, locked in their homes as captive audiences, are fed bucketloads of Trump agitprop and rah-rah patriotic warmongering directed against a virus, televised live from the White House. Almost as much as the virus and the economic calamity it's manifesting, we should be deeply concerned about this particular "shock to the system" and the way it's fueling Trump's re-election campaign.

The cruel and obvious irony here is that the alleged "enemy of the people" could help to re-elect the man who's responsible for calling them that.

I used to believe it was valuable to show Trump for who he is: an unrepentant ghoul who, over this past weekend, gleefully mocked Mitt Romney for being in quarantine (so much for unity and cooperation). Unfortunately, I was wrong to assume that American television viewers — some of whom are wrestling strangers for toilet paper — were sophisticated enough to smell a clown-faced rat. I was also wrong to assume that cable news people wouldn't repeat their participation in the run-up to Iraq or their empty-podium mistakes from 2016, and yet here we are again. As I wrote last week, it's like Groundhog Day, over and over and over.

A non-war war to rally around, and a handful of TV networks to broadcast it, could be more than enough to overcome Trump fatigue, and could easily overwhelm this year's edition of an electoral "blue wave." The semi-hopeful news is that Trump's spent the last five years relentlessly trolling and demonizing anyone who isn't a sworn disciple in his whine-and-rage cult, so it's unlikely he'll ever accumulate the kind of popular support George W. Bush received after 9/11. But he doesn't need to. All he needs are a few thousand extra votes in several swing states — enough to game the Electoral College yet again — and our descent into fascist idiocracy will be dramatically accelerated, thanks in part to Donald Trump's unwitting accomplices in TV news.