Here's the ‘original sin’ of Trump's ‘failed US response’ to coronavirus 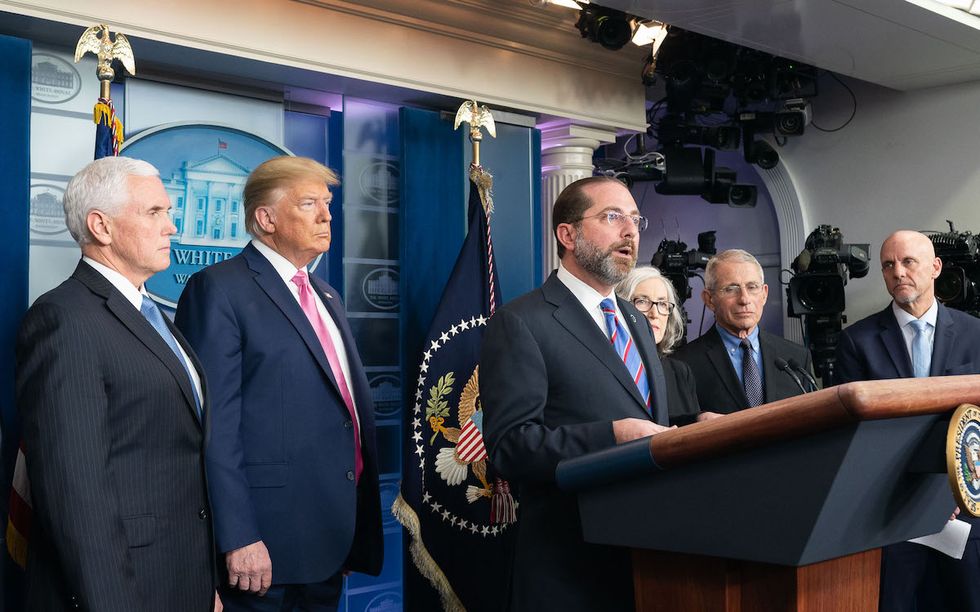 A long list of developed countries were quick to implement aggressive coronavirus testing, but not the United States — where, according to former Food and Drug Administration Commissioner Scott Gottlieb, it is entirely possible that when extensive, widespread testing is finally done, it will likely show a “total case count” in the “high thousands or probably low ten thousands.” Journalist Eugene Robinson, in his Washington Post column, is vehemently critical of the Trump Administration’s slow response to coronavirus — and widespread testing, he stresses, should have been started weeks ago in the United States.

“When the history of the failed U.S. response to this virulent new pathogen is written,” Robinson asserts, “the unbelievable lack of testing will be seen as the original sin. As of (March 12), as few as 10,000 individuals across this country had been tested for the virus. By contrast, South Korea — where new infections are tapering off — has been able to test more than 10,000 people per day.”

We are likely to find that spread is far more distributed in communities across U.S. and while total case count may… https://t.co/xmV6MMxLo0
— Scott Gottlieb, MD (@Scott Gottlieb, MD) 1584098078.0

The liberal columnist and frequent MSNBC contributor goes on to note that “there are still nowhere near enough test kits available. (Trump) Administration officials keep saying this situation will soon change, but for now, Americans are left ignorant and vulnerable.”

According to Robinson, the lack of universal health care in the U.S. is especially troubling during a deadly pandemic like coronavirus.

“This epidemic has revealed serious deficiencies in a health system that delivers some of the most advanced care in the world, yet also does not cover millions of Americans,” Robinson warns. “I wouldn’t be surprised if nations with better testing soon began imposing travel bans against those coming from the United States.”

“It was both typical of Trump and deeply unsettling that he tried so hard to portray the coronavirus as a foreign threat,” Robinson writes. “Wherever it came from, the virus is here. Further efforts to keep it out, even if epidemiologically sound, seem beside the point.”

This week, Robinson observes, the headlines showed the coronavirus pandemic going from bad to worse — and underscored its severity.

“Was it the news that Tom Hanks, someone as familiar as a next-door neighbor, tested positive for the novel coronavirus?,” Robinson writes. “Was it the NBA suspending its season, or the NCAA’s decision to cancel the March Madness tournament? Was it the World Health Organization’s official designation of the outbreak as a global pandemic?…. Whatever the trigger, the threat posed by the coronavirus no longer feels theoretical in the least. It is real.”