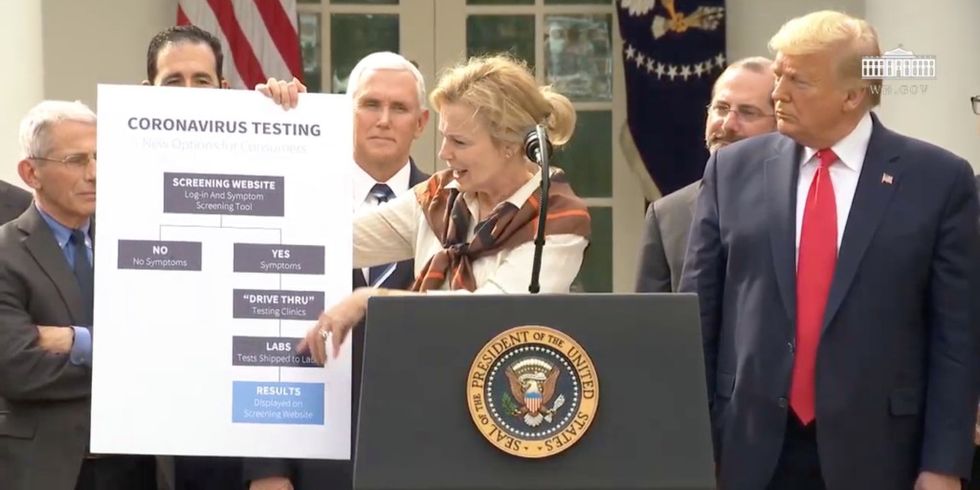 During his Friday afternoon press event—an event that seemed focused entirely on pumping up the stock market by name dropping as many corporations as possible—Donald Trump claimed that Google was working on a website that would help worried Americans figure out if they needed to be tested for the novel coronavirus. The website, according to Trump would be done soon, and would not only provide information on whether a test was called for, but advise on where to go for a test. Trump was not only very specific, noting that Google had “1,700 engineers working on this right now,” but took the time to make a backhanded swipe at the initial difficulties of the web site connected to the Affordable Care Act.

The only problem is … everything. Google is not building the website Trump described. Not with 1,700 engineers. Not at all. Another company owned by the same parent company as Google is working on a site connected to the coronavirus, but it is absolutely nothing like what Trump described. In a press event that was entirely designed to make Trump’s disastrous handling of this crisis look better, Donald Trump decided the best approach was to simply lie his ass off.

Trump’s claim about the Google site wasn’t something made in passing. He went on at length. “Google is going to develop a website,” said Trump. And getting in that knock against the difficulties in bringing the Obamacare insurance site up to snuff, he added, “It’s going to be very quickly done, unlike websites of the past.” Trump then went on to detail how this site would direct Americans to testing facilities; testing facilities which Trump hyped as if he was opening a chain of chicken sandwich joints. “Determine if a test is warranted, and facilitate testing at a nearby convenient location. We have many, many locations behind us, by the way. We cover this country and large parts of the world, by the way. We’re not gonna be talking about the world right now, but we cover very, very strongly our country. Stores in virtually every location.” Stores. He actually called them stores. “ Google has 1,700 engineers working on this right now. They have made tremendous progress.”

This wasn’t the only time Trump referred to the site during his press event. Dr. Debbie Birx even brought a visual aid, a poster suitable for hanging in any fourth grade classroom, that supposedly showed the functionality of this site. Birx reinforced Trump’s statements that Americas would be able to select them symptoms, check on whether they needed to be tested, and get directed to the nearest facility. She even added to the supposed functionality, suggesting that after taking a test, people would be able to check on their results.

It was only hours after Trump talked that Google slipped out an announcement to explain just when Americans would be able to access this wonder site directing them to the nearest Honest Don’s Really Existing Testing Station. That would be never.

Google is working on nothing, they explained. Verily Life Sciences—another company opened by the same parent, Alphabet—is working on a site, but nothing about it matches what Trump said. That site is to help triage COVID-19 patients. It’s only for the Bay Area. And it’s not just about to appear, it’s still in “early stages of development.” Google doesn’t specify how many engineers are working on the site at Verily, but since the entire staff of Verily, most of whom are not web developers, is just 400 people, it’s a cinch it’s not “1,700 engineers.”

So where did Trump get that this was a national site? Where did he get the idea that it was going to be ready soon? Where were the descriptions of the functionality generated? Where did the figure of 1,700 engineers come from?

Those are really good questions. Which you can bet that the press will not ask at the next event.