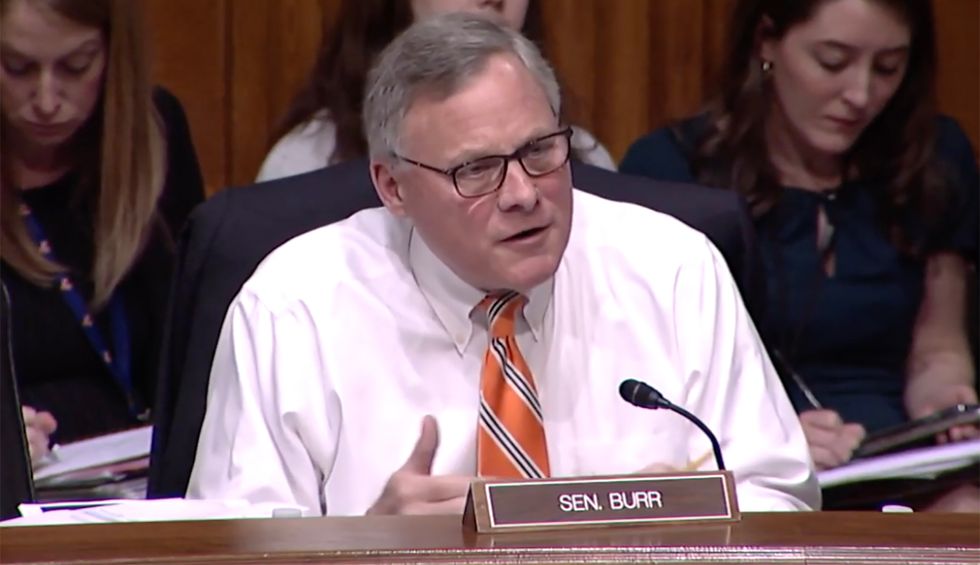 Three weeks ago in late February, right-wing media — from radio host Rush Limbaugh to Fox News and Fox Business — was full of Republicans and supporters of President Donald Trump insisting that the mainstream media were exaggerating the threat of coronavirus in order to harm Donald Trump’s presidency (Fox, like Trump, has since shifted its tone). But it was also three weeks ago, on February 27, that Sen. Richard Burr, the North Carolina Republican who chairs the Senate Intelligence Committee, was privately warning about how dangerous coronavirus was. And National Public Radio (NPR) has obtained a recording of Burr’s disturbing assertions.

According to NPR’s Tim Mak, Burr addressed the COVID-19 threat at a private luncheon organized by a North Carolina group called the Tarheel Circle. And Burr, in the recording, is heard warning that coronavirus is “much more aggressive in its transmission than anything that we’ve seen in recent history. It’s probably more akin to the 1918 pandemic.”

Burr’s comments, according to NPR, “raise questions” about why that private audience was getting a “a more frank assessment than the general public” was getting at the time. The recording, Mak noted during a March 19 appearance on NPR’s “Morning Edition,” was provided by “an attendee who became alarmed about Burr’s dire warnings” and “began to record.”

Mak explained, “Sen. Burr warned well in advance that the coronavirus could be very destructive. A lot of the things he warned about have actually come to pass: 13 days before the State Department began to warn against travel to Europe and 15 days before the Trump Administration banned European travelers to the U.S., Burr warned those in that room to reconsider.”

In the recording, Burr is heard saying, “Every company should be cognizant of the fact that you may have to alter your travel. You may have to look at your employees and judge whether the trip they are making to Europe is essential or whether it can be done on video conferencing. Why risk it?”

In other words, Burr was giving the Tarheel Circle crowd the type of warning that Democrats and health officials were offering at the time — only to be demonized for it by Limbaugh and many of the far-right pundits at Fox News.

“Morning Edition” said that it wanted to “be careful” about the “timing” of Burr’s Tarheel Circle remarks. Asked what Burr was saying publicly at the time, Mak replied, “Nowhere in press statements or other remarks did Sen. Burr provide warnings about how bad he worried the coronavirus crisis would become. I think what’s interesting about this story is that Burr was providing a stark assessment about coronavirus to a small audience of constituents — which as an elected official, he never told the general public. This story raises questions about whether Burr was truly frank with the public about how bad the coming weeks might be, in his opinion.”

Mak added, “His comments at the luncheon contradicted the president’s then-rosy outlook. That same date, here’s what the president said about the coronavirus”:

It’s going to disappear. One day, it’s like a miracle — it will disappear. And from our shores, we’ve — you know, it could get worse before it gets better. It could maybe go away. We’ll see what happens.

Burr, Mak noted, has considerable knowledge on biohazards and pandemics — yet when it came to coronavirus, Burr “didn’t speak out about his assessment” publicly in late February.