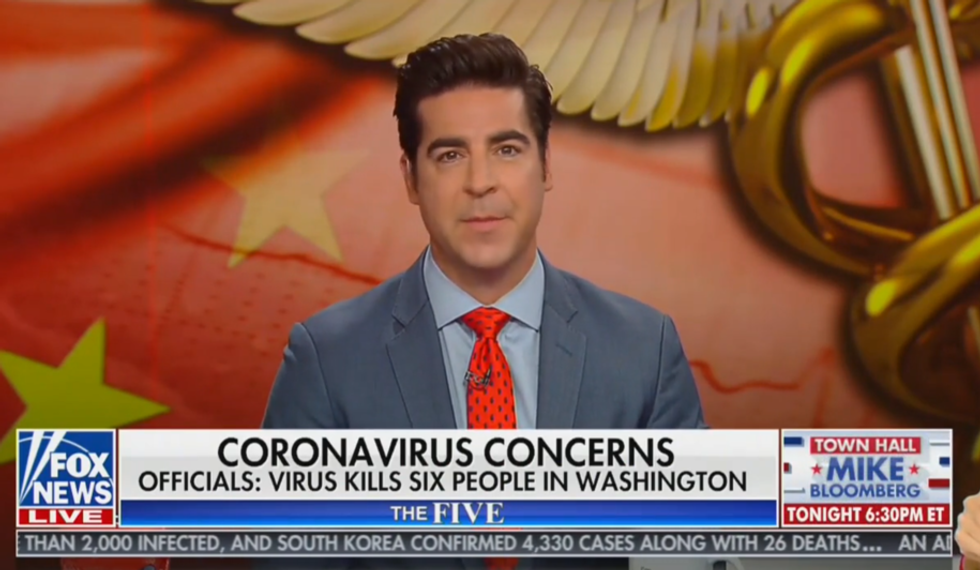 Fox News’ Jesse Watters went after his favorite target Monday night: Chinese people. As host of the The Five, a show on which the cumulative intelligence of the panel adds up to the number 5, Watters used the coronavirus as a jumping-off point to demand an apology from China. For what? For the coronavirus, which causes COVID-19 disease. Watters is probably best known for his “Watters World” segments, during which he walks around making fun of people, and more specifically for the wildly racist episode in which he made fun of Chinese people in Chinatown, in a man-on-the-street sort of performance. On Monday night’s show, after the panel brought up Trump’s handling of public health concerns stemming from COVID19, Watters showed off some of his trademark racist humor.

Watters says, “I would just like to ask the Chinese for a formal apology. This coronavirus originated in China, and I have not heard one word from the Chinese. A simple ‘I am sorry’ would do.”

At this point, there is literally only one person laughing, while the rest look off into the studio, probably at a producer they know.

Watters continues, “It would go a long way. I expect a formal apology tomorrow. Doesn’t matter if it comes from [Chinese President] Xi or the embassy, and I think all of my colleagues around this table will join arm and arm with me, also demanding a formal apology from the Chinese people.”

At this point the three other conservatives on the panel begin laughing because they are actually half uncomfortable, half so through-the-looking-glass indifferent to humanity. Then Dana Perino asks Watters, What if the shoe were on the other foot and the virus had originated in the United States? Watters has the perfect racist answer for that, which is a joke/not joke, like the rest of Watters’ sense of bigoted humor: “It didn’t start here, Dana, and I’ll tell you why it started in China. Because they have these markets where they eat raw bats and snakes.”

Perino exclaims, “No, Jesse,” but the cat is out of the bag, and Watters is ready to take this line of thinking right into the black hole sun of his soul. “They are a very hungry people,” he says. “Their communist government cannot feed the people, and they are desperate, this food is uncooked, it’s unsafe, and that’s why scientists believe that’s where it originated from.”

By then the whole gang is laughing at wacky Watters, but quiet down as he ends by saying that the Chinese government has not been transparent to its people and the world about the extent of COVID-19 penetration—glass houses, anyone? Researchers believe the origins of viruses like the one that causes COVID-19 are possibly to be found in bats, snakes, or maybe pangolins. However, how this virus might have made a transition to humans remains very unclear. And jokes about hungry Chinese people causing pandemics out of desperation are not jokes at all.

But, as with the AIDS epidemic in the 1980s and 1990s, the right wing sphere is full of fact-free stories that can be summed up as someone else doing something in some other country to cause the badness, and if we were all white and living right, none of this would be happening.

Making jokes that are racially charged doesn’t necessarily mean you are a dangerous racist. But when most of your so-called humor and joke structure depends almost exclusively on saying shitty misleading, uninformed things into microphones about other races, you actually are dangerous.