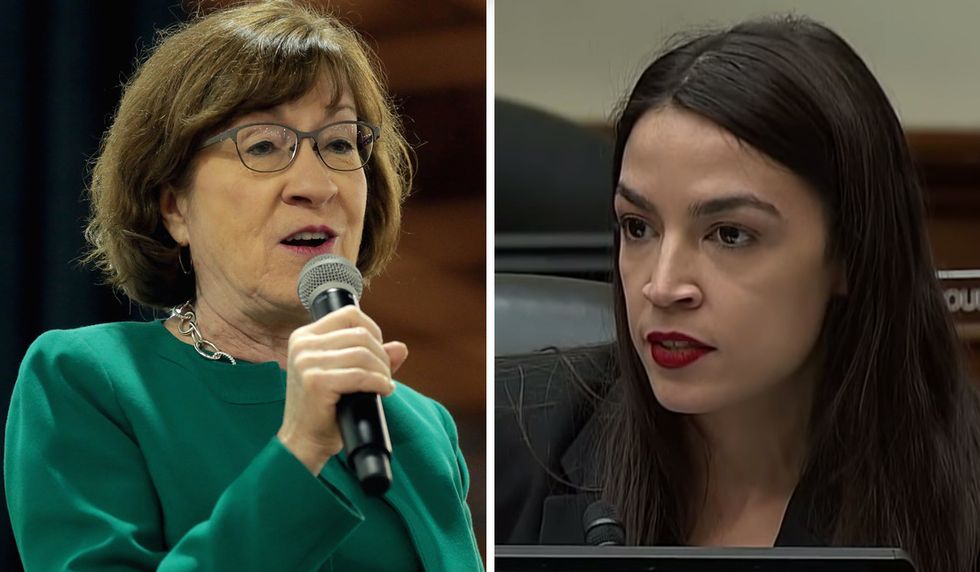 In the U.S.  Senate, Democrats and the GOP majority have been vigorously debating the form that an economic stimulus package in response to the coronavirus crisis should ultimately take. Democratic Sen. Sherrod Brown of Ohio has stressed that a bill should contain real, genuine help for struggling U.S. workers rather than merely being a corporate bailout — and GOP senators, from Sen. Susan Collins of Maine to Sen. Tom Cotton of Arkansas, have accused Democrats of not negotiating in good faith. Meanwhile, in the U.S. House of Representatives — which has already passed a stimulus bill — Rep. Alexandria Ocasio-Cortez is calling out Senate Republicans for their shenanigans.

Describing Collins’ voting history, AOC tweeted, “@SenatorCollins can keep her crocodile tears. She voted & fought HARD to strip pandemic prep funding. She helped drive the lack of preparation that we had leading up to this. What’s actually disgraceful is her “I’m a Moderate Lady” dance to cover up brutal policies and votes.”

In a separate tweet, AOC noted that Collins voted for the confirmation of Justice Brett Kavanaugh to the U.S. Supreme Court in 2018 and, in 2017, voted for the Tax Cuts and Jobs Act — or as AOC describes it, “the GOP tax scam.”

According to Ocasio-Cortez, Collins is “defending an utterly corrupt bill to shower public money on friends and donors. Susan Collins is not a moderate. She just plays one on TV.”

PBS’ Lisa Desjardins, in a Twitter thread, described in detail some of the conflicts that have been occurring between Democrats and Republicans in the Senate during their debates on a stimulus package.

“As the only reporter in the Senate chamber for all that, let me just say WOW,” Desjardins tweeted. “I’ve seen a lot, never seen anything quite like that.”

Desjardins, describing the ways in which the tension “boils over” now, noted how testy things became between Collins and Senate Minority Leader Chuck Schumer. When Collins wanted to speak on the Senate floor and Schumer objected, Cotton asserted, “C’mon…. This is bullshit!” And Collins told Schumer, “You are objecting to my speaking? This is appalling!”

4/ Schumer is finally able to communicate he wants to ask about the question and move some voice votes. McConnel… https://t.co/KxZJ7iqhdD
— Lisa Desjardins (@Lisa Desjardins) 1584983881.0

Watch a clip below: