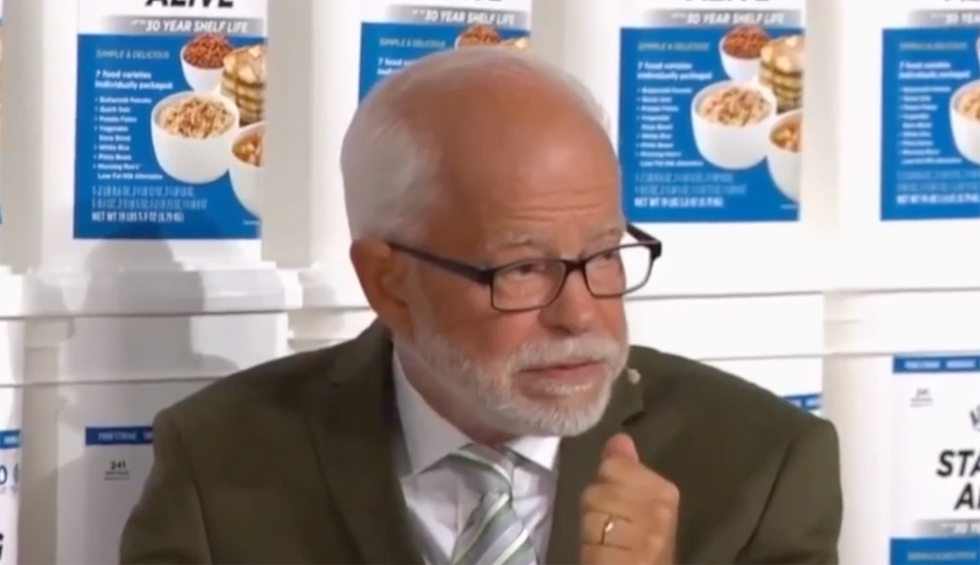 Disgraced right-wing televangelist Jim Bakker has been promoting his product Silver Solution as a way to treat the deadly coronavirus, and attorneys general in different states are going after him with a vengeance for it.

Schmitt, according to Washington Post reporter Meagan Flynn, has asked a judge for a  temporary restraining order in order to stop Bakker from marketing Silver Solution as a way to treat coronavirus. In its lawsuit, Schmitt’s office asserts that Bakker and his television program, “The Jim Bakker Show,” are “falsely promising to consumers that Silver Solution can cure, eliminate, kill or deactivate coronavirus and/or boost elderly consumers’ immune systems when there is, in fact, no vaccine, potion, pill, potion or other product available to treat or cure coronavirus disease 2019.”

On February 11, Bakker featured guest Sherrill Sellman on his show, describing her as a “naturopathic doctor” and asking her to discuss Silver Solution. Bakker told Sellman, “This influenza that is now circling the globe, you’re saying that Silver Solution would be effective” — and she responded that although the product hasn’t been tested on covid-19, it “has been tested on other strains of the coronavirus and has been able to eliminate it within 12 hours. Totally eliminate it, kills it. Deactivates it.”

Sellman went on to claim that Silver Solution “has the ability to kill every pathogen it has ever been tested on, including SARS and HIV.”

Schmitt’s lawsuit follows a March 5 cease-and-desist letter from James, whose office accused Bakker of false advertising. In the letter, James’ office asserted, “Your show’s segment may mislead consumers as to the effectiveness of the Silver Solution product in protecting against the current outbreak. Any representation on ‘The Jim Bakker Show’ that its Silver Solution products are effective at combating and/or treating the 2019 novel coronavirus violates New York law.”

Bakker has been selling Silver Solution on his show’s website, but Flynn reported that as of Wednesday morning, March 11, it appeared that the product had been “removed from the program’s online store.”

Despite his appalling history, Bakker still commands a devoted and gullible Christian Right following. The televangelist, who hosted “The PTL Club” with the late Tammy Faye Bakker (who he was married to) from 1974-1989, was involved in a major sex scandal in the late 1980s: Jim Bakker was cheating on his wife with Jessica Hahn, a church secretary, and paid her thousands of dollars in hush money.

Fellow televangelist Jimmy Swaggart lambasted Bakker for it — before it was revealed that Swaggart (a cousin of rock & roll/country music icon Jerry Lee Lewis) was cheating on his wife with prostitutes. Because of Bakker’s problems, the late Rev. Jerry Falwell (president of the Moral Majority) took control of PTL Ministries. In 2020, Falwell’s son, Jerry Falwell, Jr., heads Liberty University and is a major supporter of President Donald Trump.

The Jessica Hahn scandal, however, was the least of Jim Bakker’s problems. In the late 1980s, Bakker was indicted on multiple criminal charges, ranging from wire fraud to mail fraud. He ended up serving four years in prison and was released in 1994.