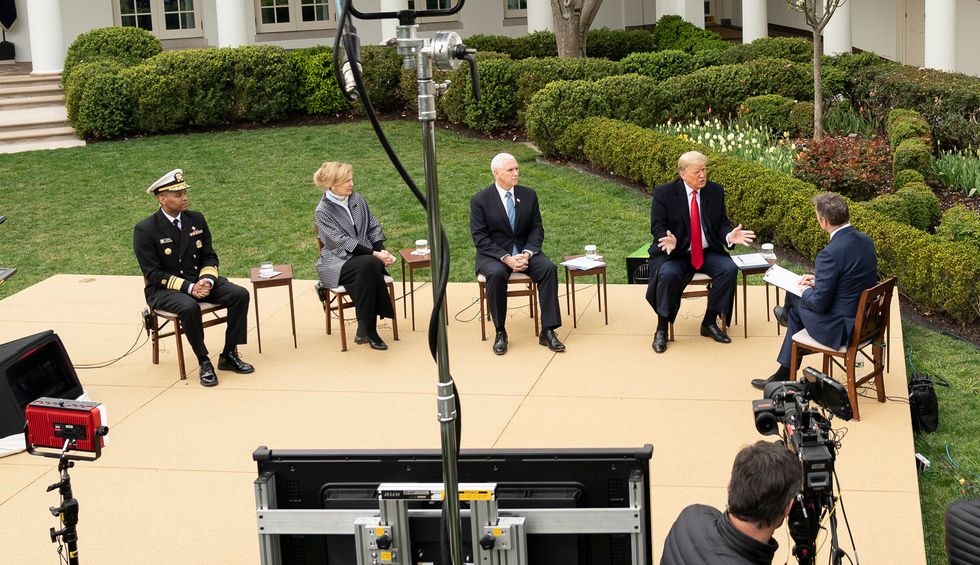 During the coronavirus pandemic, Dr. Anthony Fauci and Dr. Deborah Birx — both key members of President Donald Trump’s coronavirus task force — find themselves in a challenging position: they need to offer accurate medical information but also need to avoid offending a hypersensitive, volatile president. Fauci obviously realizes that however much frustration he feels at times, he cannot openly express it. In an article for Vanity Fair, former FBI special agent Frank Figliuzzi equates Fauci and Birx with “hostage negotiators” and offers them some tips on “hostage negotiation.”

The 57-year-old Figliuzzi (who joined the FBI in 1987) is speaking metaphorically, of course: Fauci and Birx aren’t “hostage negotiators” in the literal sense. They’re medical experts, not people with a law enforcement background. But Figliuzzi literally has a history of hostage negotiation: he once oversaw an FBI squad that dealt with kidnappings of Americans in Latin America. In 2011, Robert Mueller (who was director of the FBI at the time) appointed Figliuzzi director of the FBI’s counterintelligence division).

Figliuzzi sets up his article (which is humorous and serious at the same time) like a letter, writing, “Dear Dr. Deborah Birx and Dr. Anthony Fauci” before going on to describe some of the things that go into “hostage negotiation.”

“In order for all of us to survive the next month and beyond,” Figliuzzi advises Fauci and Birx, “you’ll both need to understand how similar your predicament is to a hostage standoff, and how you can employ kidnap and ransom negotiation techniques to overcome the challenges of your figurative captivity. Since you just bought us all another month of smart social distancing, there are already signs that you are applying some of these proven methods even if you don’t fully grasp them as such. But this can go south quickly, and we’re counting on you to get it right.”

For all the humor in Figliuzzi’s piece, he makes an important point: Americans really are counting on Fauci and Birx for vitally important information — and many fear that if they offend Trump (who is easily offended), he will fire them.

“In most kidnappings, the captor wants money, but publicity, political demands, and yes, even ego, can drive ransom demands,” Figliuzzi explains. “This means that you both retain your value if you can remain alive; in your case, that means not being kicked off the task force. Since the president has kept you in place thus far, he seems to understand that he needs you around — even if he’s growing weary of your incessant talk of science and epidemiological modeling.”

Trump has a long history of firing those who try to talk sense to him. And Figliuzzi applauds Fauci and Birx for their ability to reason with a president who can be incredibly unreasonable.

“You must avoid upsetting the president to the point that he neutralizes you,” Figliuzzi tells Fauci and Birx. “You’ve already had success in convincing the president to back off the indefensible assertion that the nation can return to normal on Easter Sunday. Dr. Fauci, your minimizing of Trump’s nonsensical notion as simply ‘aspirational’ was masterful in that it helped him to save face and to view you as less of a threat.”

Figliuzzi concludes his article by describing “Stockholm syndrome” to Fauci and Birx and telling them how they can avoid it.