Kentucky vs. Tennessee on coronavirus may be the best example of 'elections matter' in decades 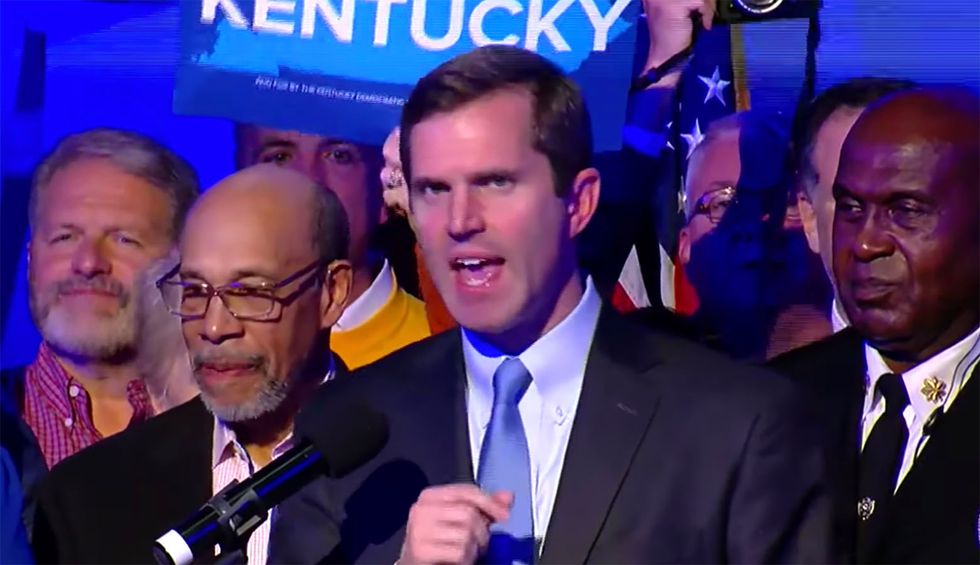 Last November, voters in Kentucky handed the governorship to Democrat Andy Beshear in a narrow victory of incumbent governor Matt Bevin. Bevin, a Donald Trump favorite, had done his best to undermine Kentucky’s successful deployment of the Affordable Care Act , blamed striking teachers for causing rape, and cancelled background checks for owning a gun. Bevin went out the door with all the class he displayed while in office, pardoning relatives of campaign donors no matter how hideous their crimes. Beshear’s victory was narrow, and for a time Bevin refused to admit defeat and encouraged the Republican-dominated legislature contemplated overturning the election. They did not, and Beshear has since issued executive orders that secured medical care for 95,000 Kentuckians and restored the voting rights of 100,000 former felons.

A year earlier, Tennesseans elected Bill Lee as their 50th governor. The Republican governor has rejected efforts to expand Medicaid in the state, supported legislation to end a woman’s right to choose, campaigned on allowing adoption agencies to discriminate against LGBT citizens or on the basis of religion, and, of course, introduced a proposal for more guns.

Just two weeks ago, Kentucky Republicans moved to restrict the power of Democratic governor Beshear to enact executive orders. Thank goodness they were not successful. Because what Beshear has done since then is a beacon to a nation in crisis.

Originally compiled by local educator Stephanie Jolly, this chart of the difference between what has happened in Kentucky vs. Tennessee is incredibly compelling.

On March 6—the same day that the Kentucky legislature introduced a bill to limit Beshear’s power to issue executive orders—the governor used that power to declare a state of emergency, freeing up funds and resources to begin the state’s fight against COVID-19.  This was a week before Trump declared a national emergency. In fact, it was a day before Andre Cuomo declared a state of emergency for New York.

Beshear issued recommendations on social distancing the next day and began a daily update to reassure the state on actions being taken as well as provide details on the status of the outbreak. Two days after that, he restricted visitations to extended care facilities and prisons. And just five days after the original declaration of emergency, with eight known cases in the state, Beshear instructed every school to close. In the next week, the state ended in-restaurant dining, extended unemployment, and offered free testing to every person in the state—all at Beshear’s direction.

Meanwhile Tennessee had it’s first case on the same day as Kentucky, and Bill Lee did … nothing. As Beshear was closing schools in Kentucky, Lee told the people of his state that there was no reason to close schools or workplaces. Finally, on March 12, Lee declared a state of emergency. And he instructed the schools to close on Friday, March 20.

The result of these two policies is that the neighboring states are on very different paths. While Kentucky has seen an increase in cases, that increase has been slow. Not only does Kentucky have only 48 identified cases, it has conducted 768 tests. Tennessee now shows 228 cases resulting from many fewer tests, and it’s on an arc that is growing at a much higher rate. When cases are moving up exponentially, every moment counts, and acting early has huge implications down the road.

Kentucky is a state where thousands have struggled with the health effects of coal mining for decades. My own home county hosts a center for treatment of “black lung” that affects miners of all ages. These workers are hugely sensitive to a disease such as COVID-19. They have a hard time breathing no their best days.

Since this chart was made, cases in Kentucky have gone up to 63. Tennessee has passed 300. These results may not hold long term, especially with higher numbers of cases on every border, but the government in Kentucky has taken appropriate action to protect its citizens.