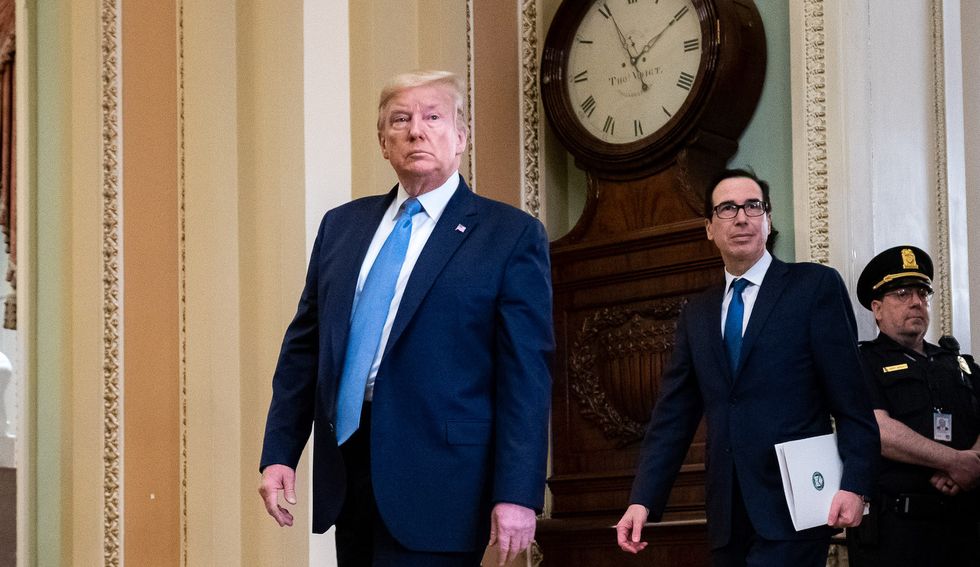 In a new piece for CNN on Wednesday, leading Trump fact-checker Daniel Dale and his colleague Tara Subramaniam detailed 28 different ways the president and his team have misled the American people about the coronavirus crisis.

"Trump has been relentlessly, comprehensively dishonest and/or inaccurate about the coronavirus -- as he was about Ukraine and impeachment, except this time on a matter of life and death," Dale noted on Twitter.

It's a devastating account of brazen dishonesty. And Dale, who previously worked at the Toronto Star before his fact-checking prowess gained him a large following, hasn't held back in calling out the extent of Trump's dishonesty. When it's clear Trump must know what he's saying is wrong, Dale doesn't hesitate to say the president is lying.

Other outlets are still hesitant to use the word "lie" to describe Trump's obviously deceptive claims. While there's reason to be careful about calling a false claim a lie — especially with Trump, who is clearly often completely uninformed or confused — it's also obvious that there are times when Trump is intentionally misleading his audience. Trump has even admitted in the "Art of the Deal" that he intentionally engages in "truthful hyperbole" — which is just an Orwellian term for lying.

But even among reporters like Dale and others who are comfortable calling out Trump's lies as such, there's still a larger fact about the sum of the president's lies that is so often left out. It seems as though they can't admit the scale of Trump's deception.

As we saw in the Ukraine scandal, and the Mueller probe before that, and now with the coronavirus, Trump isn't just lying. He's conducting an active, intentional disinformation campaign with the purpose of feeding the public falsehoods.

Dale noted, and Neil Baron pointed out in a recent piece for AlterNet, that in the coronavirus case, lives are actually on the line. This makes his lies now even more insidious and repugnant.

But recognizing the pattern in Trump's behavior is extremely important. He's not just making mistakes, he's not just getting facts wrong occasionally in a way that benefits him. He is repeatedly weaponizing false information to attack his opponents, further his political aims, and protect himself.

This is information warfare. It's a first-order crisis all on its own. And when it happens overseas, it's easy to spot. Americans know that, for instance, regimes in China, North Korea, and Russia use disinformation campaigns to further their own interests.

American media, however, largely can't come to grips with the fact that Trump is doing the same thing. Thankfully, the whole administration is not behind his effort — Trump often contradicts his own appointees and officials to spread his lies. But he's still the head of the executive branch, so his lies can't merely be written off as unimportant. Often, his subordinates have to work hard to cover up for him, and they bend over backward to square contradictory statements. Meanwhile, the right-wing media has become a platform to echo Trump's personal line, even when it conflicts with the Trump administration. Any discrepancies can be dismissed as the actions of the "deep state."

There has been some acknowledgment of the problem. Most notably, The Atlantic ran a recent piece called "The Billion-Dollar Disinformation Campaign to Reelect the President." It said that the Trump campaign is using "techniques pioneered by dictators" to "shape the 2020 election."

The American press is not built to handle it. Journalists are addicted to the "both sides" model, where each party gets to state its opinion and readers are left to make up their own minds. Sometimes, readers are given fact-checks clearly showing one side is more dishonest, but much reporting leaves out the broader context. And even when journalists express due skepticism and criticism of the administration after it has squandered every ounce of goodwill and benefit of the doubt, they still struggle to grapple with the scope of the problem.

At this point, it's not clear there's a solution. Naming Trump's lies, and even accurately recognizing their scope, can just further alienate those who are inclined to believe them. The best we may be able to hope for is that this time, his war on truth will turn into a losing battle. Eventually, the truth might win out.