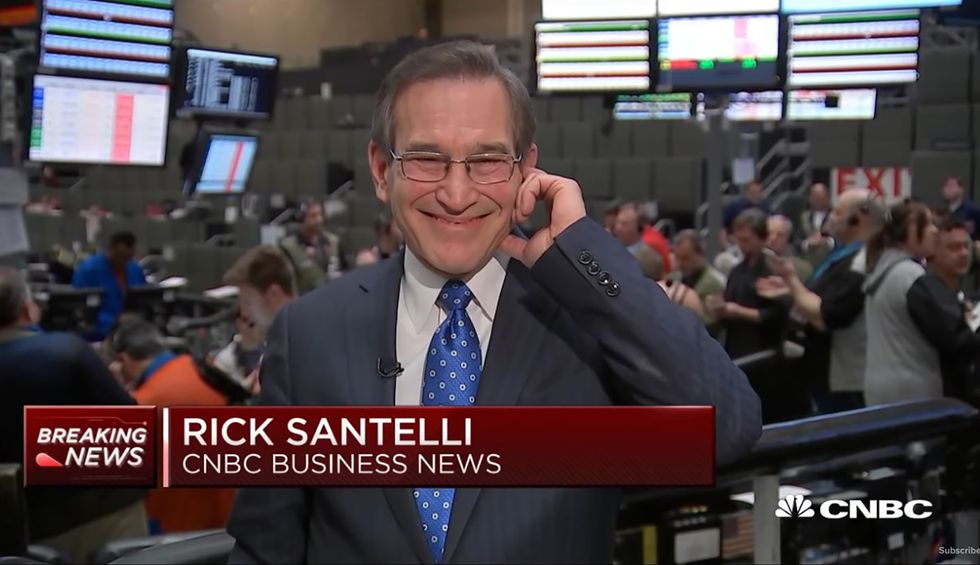 If you want to see the face of the Republican Party—if you really want to understand what drives their thought process and what their core values are--you want to watch all 26 seconds of this. After that, you’ll understand for the rest of your life.

In case you didn’t get all that, here is the transcript:

Santelli, who is widely credited with helping spark the Tea Party movement in 2009, made the comments during CNBC’s “The Exchange” in a conversation with anchor Kelly Evans, who asked him what the catalyst was for the recent chaos on Wall Street.

“Of course, people are getting nervous. And listen, I’m not a doctor. I’m not a doctor. All I know is, think about how the world would be if you tried to quarantine everybody because of the generic-type flu. Now I’m not saying this is the generic-type flu. But maybe we’d be just better off if we gave it to everybody, and then in a month it would be over because the mortality rate of this probably isn’t going to be any different if we did it that way than the long-term picture, but the difference is we’re wreaking havoc on global and domestic economies.”

We should just give the coronavirus to everybody, and let those people susceptible to it just die. Just get it over with. So the stock market would go back up. That is what Rick Santelli, someone who CNBC considers a legitimate “commentator,” just told Americans.

Santelli is an editor at CNBC, appearing on that channel every weekday morning. He’s their go-to guy on the floor of the Chicago Mercantile Exchange. His history is unique—he’s widely credited for catalyzing the faux-conservative Republican “movement” that some may recall as the “Tea Party.”

On February 24, 2009, while reporting for Squawk Box from the floor of the Chicago Mercantile Exchange, Rick Santelli (who was briefly featured during Wednesday’s debate) went on a dramatic rant against President Obama’s Homeowners Affordability and Stability Plan, a stimulus package aimed at helping homeowners in danger of losing their homes to foreclosure.

Santelli’s racist rant, televised from the floor of the Chicago commodity exchange pits, blaming American “losers” for defaulting on their mortgages (with the implication that they had caused the financial crisis), quickly caught the fancy of the right-wing media.  Here are some excerpts:

“Government is promoting bad behavior. . . . Do we really want to subsidize the losers’ mortgages? This is America! How many of you people want to pay for your neighbor’s mortgage? President Obama, are you listening? How about we all stop paying our mortgages! It’s a moral hazard.”

There was never any doubt as to who he was talking about, or what their skin color was. Santelli’s statements, which went viral at the time, pushed every seething, racist button in the conservative mindset. It provided a golden opportunity for white Republicans to retaliate against the shock they’d received by the election of the nation’s first African-American president. As explained by Ed Kilgore, writing for New York Magazine:

It was a rant at those shiftless poor people who took out mortgages they should have known they could not repay and then expected virtuous successful people like Santelli himself to rescue them with his tax dollars. Perhaps Santelli did not have a racist bone in his body — how should I know? — but he was pushing a narrative beloved of racists at all times and in all places. They resent those people who seek to escape their just desserts via force, whether it’s through street crime or the organized larceny of government redistribution.

Santelli later took full credit for sparking what ultimately became known as the “Tea Party” movement, the massive, astro-turfed effort by Republicans, funded by the fossil fuel industry, specifically the Koch brothers, to oppose all of President Obama’s policies.

So Santelli’s statements here shouldn’t really surprise anyone. This is the natural endgame of “conservatism” and its proponents in the Republican Party, writ large: It’s OK if everyone else dies, because I’ve got mine.

If you’re a Republican you probably think this makes a lot of sense.

But then you’ll develop a fever, and start to cough.

That cough will get worse, and it won’t stop.

As noted in MarketWatch article linked above, the Twitter is now teeming with responses to Santelli’s wisdom:

Santelli completely misunderstands. It’s not true that “everyone will eventually get it, one way or the other.” The… https://t.co/dlo2iqr8uq
— Patrick Chovanec (@Patrick Chovanec)1583452133.0