Can the US hold a free and fair election — especially this one — during a pandemic? 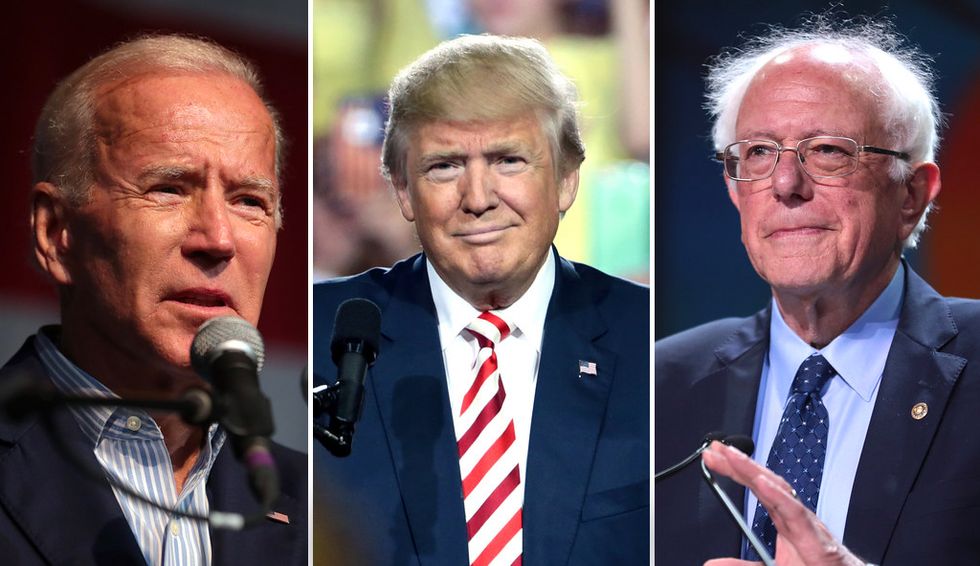 Joe Biden, Donald Trump and Bernie Sanders, images via Gage Skidmore / Flickr.
Julie Hollar
and
FAIR
March 26, 2020Drugs
It might be easy to forget, given the crisis enveloping the world at the moment, that the United States is scheduled to hold a very important election in November. But with projections that the COVID-19 crisis isn't going away any time soon, what will this mean for voters' access to the polls, and the very legitimacy of the election? These are important questions, and journalists play a critical role in answering them.

Many have risen admirably to the task. For instance, the Center for Public Integrity, in partnership with Time (3/23/20), spoke with voting rights experts to lay out the possibilities and pitfalls of different responses. The primary action being floated is a bill, introduced by Sens. Ron Wyden, D-Ore., and Amy Klobuchar, D-Minn., that would require no-excuse vote-by-mail options and 20 days of early in-person voting in every state, as well as offering federal funding for the implementation of those measures.

But as voting rights experts told CPI reporter Carrie Levine, the changes have to be implemented thoughtfully to avoid disenfranchisement. Mail-in ballots from communities of color, for example, have historically been rejected at higher rates, and language, ability and even poor access to reliable mail service (as on Native American reservations, for instance) can be a barrier for many.

"With gatherings of people suddenly presenting an imminent health threat, state officials and voting rights activists have begun calling for an enormous expansion of voting by mail," reports the New York Times (3/19/20).

As Politico (3/17/20) and the New York Times (3/19/20), among others, also reported, election officials warn these steps have to be jumped on immediately in order to have any chance of being ready to roll out for Nov. 3, and to work out all the potential security and disenfranchisement risks. The media must push these concerns front and center if there's any hope of pulling off a successful election.

Editorially, some are speaking out. The New York Times (3/21/20) and Washington Post (3/18/20) editorial boards used their platform to urge passage of Wyden and Klobuchar's bill. The Times (3/12/20) gave column space to Dale Ho of the ACLU to make the case as well, while the Post (3/16/20) did so for Wyden and Klobuchar. Times columnist David Leonhardt (3/18/20) urged congressional Democrats to engage in "bare-knuckle politics" to ensure it happens: "Refuse to pass any big stimulus bill unless it includes provisions to ensure that the country can hold a presidential election this fall."

But not all outlets appear equally concerned. Some simply aren't discussing it: A FAIR search of ABC, CBS and NBC transcripts turned up no on-air discussions of the impact of the crisis on the November elections.

Others have been quick to play down worries. Take The Hill, where the headline over a column by Blake Kaufmann (3/22/20) reassured: "Have No Fear, the General Election Will Move Forward." The column itself, while warning that "There is a lot to concern us about the ways [Donald Trump] could abuse executive power in the months ahead in order support his re-election efforts," concludes that, considering clear constitutional protections,

Americans should have absolute confidence that regardless of Trump's rhetorical and procedural shenanigans (and no doubt there will be plenty), the November elections will proceed as scheduled.

CNN's Chris Cillizza (3/18/20) notes that Ohio Gov. Mike DeWine halted primary voting despite being told by the state's supreme court that he couldn't. But that couldn't happen in America, apparently.

Or see CNN.com (3/18/20), where Chris Cillizza argued under the headline "No, Donald Trump Can't Cancel the 2020 General Election" that such an idea should be put

in a bin with all of the other conspiracy theories kicking around the internet regarding the reverberations and impacts from coronavirus. Facts matter. And the facts make clear this ain't happening.

While it's important to dispel myths around the ability of the president to simply cancel elections, it's just as important to warn of the very real dangers to the 2020 election.

Even if such legislation is passed — still a big if — what about the legitimacy of the election? As New York's Ed Kilgore pointed out (3/16/20), since mail-in ballots take longer to count, a days- or even weeks-long delay in finalizing the general election results — particularly in the context of such new methods of voting — could leave the vote vulnerable to accusations of illegitimacy:

Is there any remote chance Donald J. Trump would fail to fire off tweets every 15 minutes alleging without a shred of evidence that the godless socialistic Democrat Party was stealing the election with millions of illegal votes from homicidal Mexicans? It's a real concern.

If the results are close (and even if they're not), what's to stop Trump from refusing to accept the outcome? Observers mapped out ways Trump and the GOP could contest the election even well before the COVID-19 crisis struck (e.g., Washington Monthly, 4-6/19); with the uncertainty caused by imperfectly implemented new voting methods, Trump will find himself with an incredibly useful justification for challenging a loss, and the country could find itself in a constitutional crisis — or worse.

For all these reasons, ensuring accessible and secure elections in November are of the utmost importance. No respectable reporter or pundit should be downplaying threats to the elections. And all media outlets should be covering this crucial story consistently and prominently from now until Election Day — from the push for federal legislation to the process of implementation in each state.