Betsy DeVos cornered by congressman for lacking basic information about the US education system: 'You don’t know the answer?' 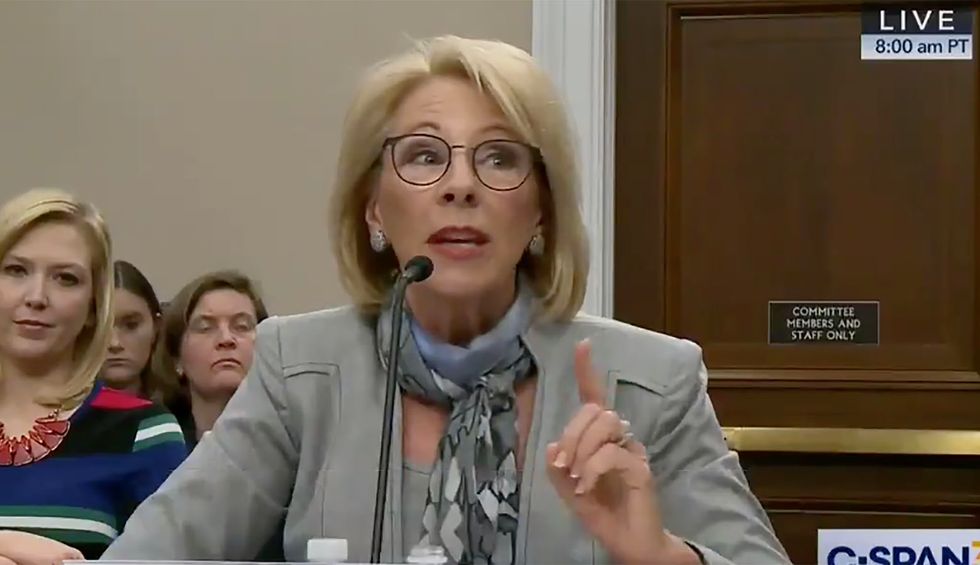 Secretary of Education Betsy DeVos testified before a House Appropriations subcommittee Thursday and was repeatedly unable to answer basic questions, got snippy with Democratic lawmakers, and falsely claimed research cited by top Democrats was wrong and had been “debunked.”

(The numbers behind that research came from DeVos herself, according to this piece in the Washington Post.)

In an exchange with Rep. Mark Pocan (D-WI), DeVos got heated, refuted his claims, and yet was unable to give a correct answer.

“Everything you’re citing is debunked, ridiculous, so I don’t accept the premise of your question,” DeVos, putting the word “question” in air quotes, told Pocan.

Congressman Pocan was referring to reports that show more than 40 percent of charter schools funded in full or in part by the federal government “collected the grants and then either did not open, or have opened and shut down,” as the report’s author wrote in The Washington Post.

Pocan responded by correctly saying the reports have “actually not” been debunked.

“That is not true, that has been a totally debunked report,” she declared, waving her finger. “It’s nothing but propaganda by an individual who has an in for charter schools.”

“So what percent of charter schools are failing?” Pocan asked.

DeVos’ mouth opened and her jaw dropped but she did not speak for several seconds.

“Do you have an idea?” Pocan pressed.

“I don’t have a state – national,” DeVos, flustered, replied.

“You’re the Secretary of Education and you don’t have this? You ‘know’ this report’s wrong, but you don’t –” Pocan said before being cut off.

“You know that number’s not right but you don’t have a correct number,” Pocan responded.

“What I know is parents and families are choosing to send their children to charter schools,” said DeVos.

“So you don’t know the answer?” Pocan again asked.

That, too, is somewhat false. After three years of an anti-public schools Secretary of Education, parents are learning that charter schools “make up an outsized share of the number of public schools persistently graduating less than half of their students.”

Watch this exchange between Devos and Pocan: