Trump’s US delegation was ‘dumbfounded’ by hostile reception at Munich conference: report 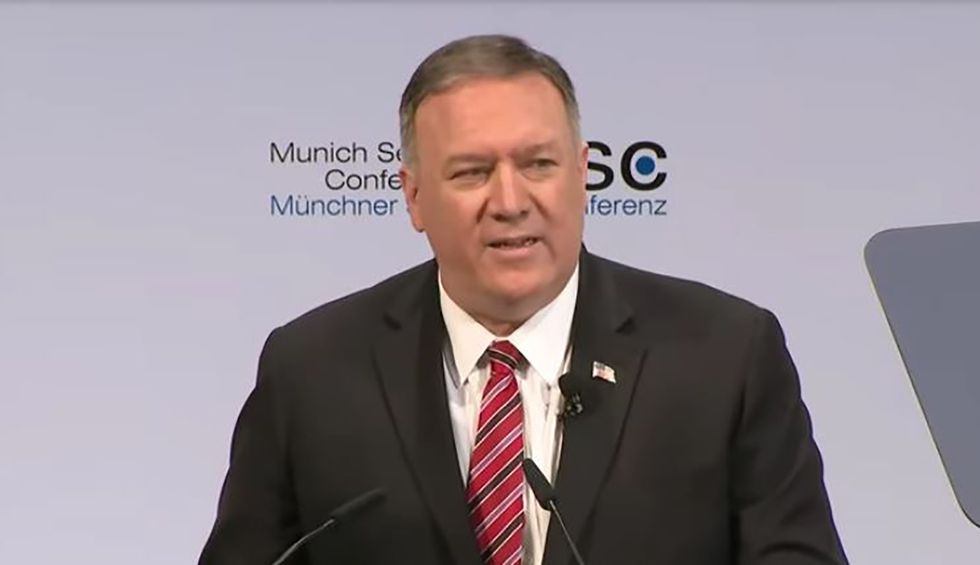 According to a report from Politico, the U.S. delegation attending the Munich Security Conference were “dumbfounded” by the hostile reception they received from world leaders which included more than a few speeches that were highly critical of the policies of Donald Trump.

The report kicks off by stating, “If the three-day event, which drew to a close on Sunday, illustrated anything, it was that the divergence between the U.S. and the dominant European powers — Germany and France (the U.K. was MIA) — is greater than ever. Those who thought last year’s tense gathering represented a low point in the relationship left Munich this year chastened.”

Over the weekend, Secretary of State Mike Pompeo gave a seventeen-minute speech that included praise for the president’s economic policies that was greeted with silence, while other leaders took shots at the U.S.

“In speech after speech, whether in public or private, European leaders lamented what they perceive as the U.S.’s disengagement from both the region and the world at large,” the report notes. “German President Frank-Walter Steinmeier opened the conference — one of the largest annual gatherings of political leaders, military chiefs and top diplomats from around the world — by accusing the Trump administration of ‘rejecting the idea of the international community.'”

Steinmeier also too a pointed jab at Donald Trump’s “Make America great again” mantra by stating, “Every country should fend for itself and put its own interests over all others … ‘Great again’ — even at the expense of neighbors and partners.”

Politico specifically reports that the American delegation was “dumbfounded” after French President Emmanuel Macron, “speaking at the forum for the first time, echoed Steinmeier the next day, noting that ‘what Europe wants is not quite the same as the U.S.'”

Pompeo lashed back at Steinmeier’s comments in his speech, telling the attendees, “I’m here to tell you the facts. Those statements do not reflect reality.”

“The reaction to Pompeo reflects the toll Trump’s aggressive, often abusive, rhetoric toward European allies has taken on the relationship,” Politico reports. “Even when confronted with facts that disprove the narrative of American disengagement, European officials simply don’t believe it. In private, U.S. representatives tell their European counterparts to ‘ignore the tweets,’ but that’s proved to be a tall order.”

Rep. Mike Turner (R-OH), who was attending the conference was also stunned by the overt hostility, telling reporters, “I was a little taken aback by the tone,” before adding he felt European nations should be more appreciative of the billions that the U.S. has spent to defend them.

Europeans “should focus on what we’re doing here,” he warned.