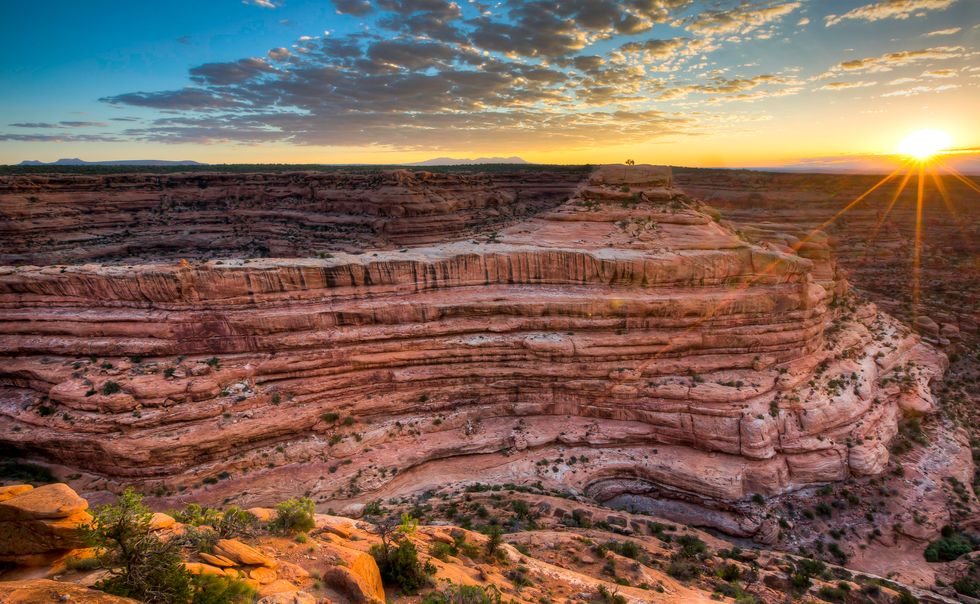 Tribal and conservation groups on Thursday condemned the Trump administration's "unconscionable" final management plans for Utah lands previously protected as national monuments, which critics warn will open up the region to ranchers who want to graze livestock and companies looking to cash in on the area's oil, gas, and coal.

In a joint statement Thursday, critics charged that the U.S. Interior Department should not have finalized the plans while President Donald Trump's December 2017 decision to severely shrink the Bears Ears and Grand Staircase-Escalante national monuments is still being challenged in federal court.

"It's the height of arrogance for Trump to rush through final decisions on what's left of Bears Ears and Grand Staircase Escalante while we're fighting his illegal evisceration of these national monuments in court," said Randi Spivak at the Center for Biological Diversity. "Trump is eroding vital protections for these spectacular landscapes."

These southern Utah sites were once off-limits to development. Now, Trump will auction the right to drill and graze… https://t.co/l0UKzbqf4O
— Sierra Club (@Sierra Club)1581015284.0

"This reckless management plan is an attempt to circumvent the courts, plain and simple," said Sybert. "It threatens one of America's richest cultural landscapes, along with living indigenous cultures tied to it since time immemorial. The destructive plan not only ignores tribes, it ignores a majority of Americans—both nationwide and in the West—who do not support the reduction of Bears Ears in the first place."

Casey Hammond, Interior's acting assistant secretary for land and minerals management, said if the agency had to wait to act until litigation was settled, "we would never be able to do much of anything around here."

The plans impacting lands in the Grand Staircase region eliminate grazing along the Escalante River but do allow for minerals extraction in former monument lands. Grazing was also eliminated in some regions of the former Bears Ears monument, now named Shash Jaa, including Butler Wash and Comb Wash.

Hammond, in a morning teleconference, said despite assertions to the contrary, there is little interest by industry in oil and gas development in the regions, and the final management plans do nothing to change the status of the federal lands, which won't be "sold off."

"Any suggestion these lands and resources will be adversely impacted by being excluded from monument status is certainly not true," he said. "There's very little interest in mineral development on these lands."

However, those fighting against Trump's decree to carve up the monuments aren't buying the administration's claim that the management plans won't imperil the previously protected land in Southern Utah, as well as Indigenous peoples and wildlife who have long called it home.

"This sellout to big oil firms, which comes after the Trump administration slashed the size of the two monuments in late 2017, is more evidence of extremely tight ties between U.S. Interior Secretary David Bernhardt and industry," said Alan Zibel, research director at Public Citizen's Corporate Presidency Project. Zibel released a report last month detailing how Bernhardt's former lobbying clients have dropped nearly $30 million to convince the Trump administration to serve the fossil fuel industry."Millions in spending on lobbying and close personal ties between lobbyists and the Trump Interior Department have proven devastating for America's public lands and an outright bonanza for oil and gas interests," he said. "Bernhardt has consistently favored industry over conservation interests and public health. Rather than listen to the millions of Americans who want to preserve these precious national monuments, the Interior Department consistently chooses to sell off our public lands to the highest bidder. Opening these special areas to exploitation threatens cultural and natural resources that never can be replaced."

Carly Ferro, interim director of Utah Sierra Club, said the plan for Bears Ears "is nothing more than a wholesale handout to extractive industry, one that is illegitimate since President Trump illegally shrunk Utah's monuments to begin with."

"These plans are atrocious, and entirely predictable," declared Sharon Buccino, senior director of lands at the Natural Resources Defense Council. "They are the latest in a series of insults to these magnificent lands by the Trump administration that began when Trump illegally dismantled Bears Ears and Grand Staircase at the behest of corporate interests two years ago."

As Mary O'Brien, Utah forests programs director at Grand Canyon Trust, put it: "There is nothing to be gained from this plan except the destruction of fossils, the expansion of scorched-earth cattle grazing and non-native forage seeding, the loss of dark skies, more roads and unenforced off-road motorization, more extraction from dwindling springs, and more unrecorded wildlife losses—all for what? To show what one president can do to any of our country's national monuments, at any time, for any self-serving political reason?"

Shaun Chapoose, a representative for Ute Indian Tribe, accused the Trump administration of "failing in its treaty and trust responsibilities to Indian tribes," a sentiment that was echoed by Davis Filfred, board chairman of Utah Diné Bikéyah.

"The Trump administration's final management plan for Bears Ears National Monument," said Filfred, "is an example of how the federal government continues to ignore Indigenous voices, and the sovereignty of the Navajo Nation, Hopi Tribe, Ute Indian Tribe, Ute Mountain Ute Tribe, and Pueblo of Zuni." Those native groups are all involved in the legal challenge to Trump's decision to shrink the monuments.