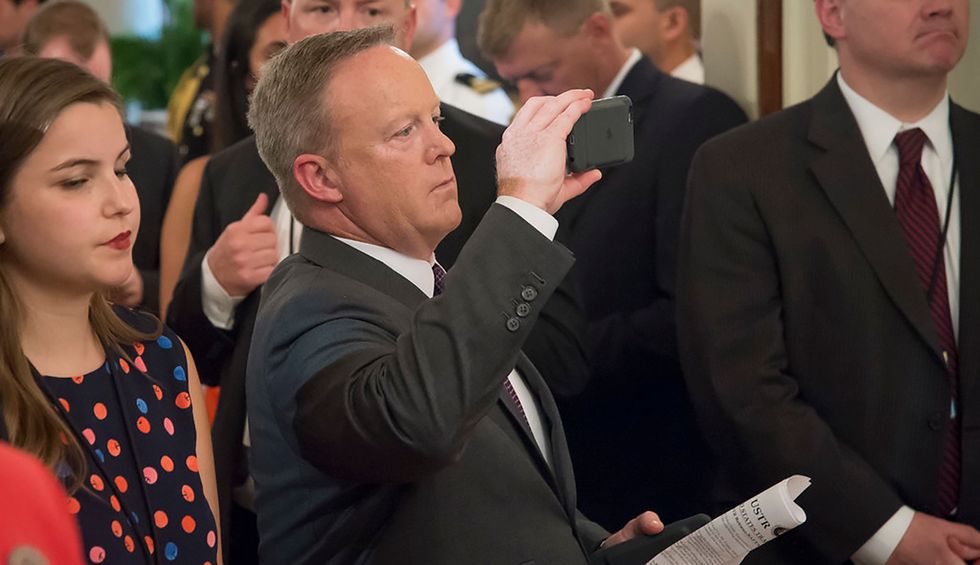 White House Press Secretary Sean Spicer takes a picture of President Donald J. Trump who hosted companies from across the country at the White House for the Made in America Product Showcase, where U.S. Department of Agriculture (USDA) Secretary Sonny Perdue attended. The White House is highlighting and celebrating each state’s effort and commitment to American made products by bringing in and showing off products from all 50 states that are made and produced in the United States.USDA photo by Preston Keres
Matthew Rozsa
and
Salon
February 13, 2020 Trump

Priebus and Spicer will each join the President's Commission on White House Fellowships, according to a White House announcement Tuesday. As a part of the commission, the pair will interview and recommend to their former boss national finalists for appointments.

Spicer, who resigned in July 2017 out of dissatisfaction with the hiring of Anthony Scaramucci as communications director, courted controversy for repeatedly telling lies on behalf the president. Among those were false claims that Trump's inauguration had the biggest crowds in history, that the president would have won the popular vote in the 2016 if not for voter fraud, that former President Barack Obama wiretapped Trump Tower and that Adolf Hitler had not used chemical weapons.

Spicer has become something of a pop culture fixture since his exit from the White House. He joined the reality competition show "Dancing With the Stars," in which he and other famous contestants were paired with professional ballroom dancers as they competed for the mirror ball trophy, last year. He announced on Cameo that he would record Valentine's Day messages for people who were willing to pay him $199 earlier this week.

Priebus, whose six-month tenure as chief of staff was the shortest in history for anyone who did not hold the position on an interim basis, was fired in July 2017. A number of reasons cited for his termination, including: Trump's disappointment with Priebus' stewardship of the campaign to repeal the Affordable Care Act and a belief that Priebus lacked the strength to run the White House.

Scaramucci also accused Priebus of being a leaker, telling Ryan Lizza of The New Yorker that "Reince is a f*cking paranoid schizophrenic — a paranoiac" and that "if you want to leak something — he'll be asked to resign very shortly."

Priebus joined the Navy after leaving the White House, going through a months-long application process before becoming an ensign and being sworn in by Vice President Mike Pence. Spicer attended Priebus' swearing in ceremony and publicly congratulated his former colleague on Twitter at the time. Prior to his gigs at the White House and in the Navy, Priebus served as both chairman of the Wisconsin Republican Party and the Republican National Committee.