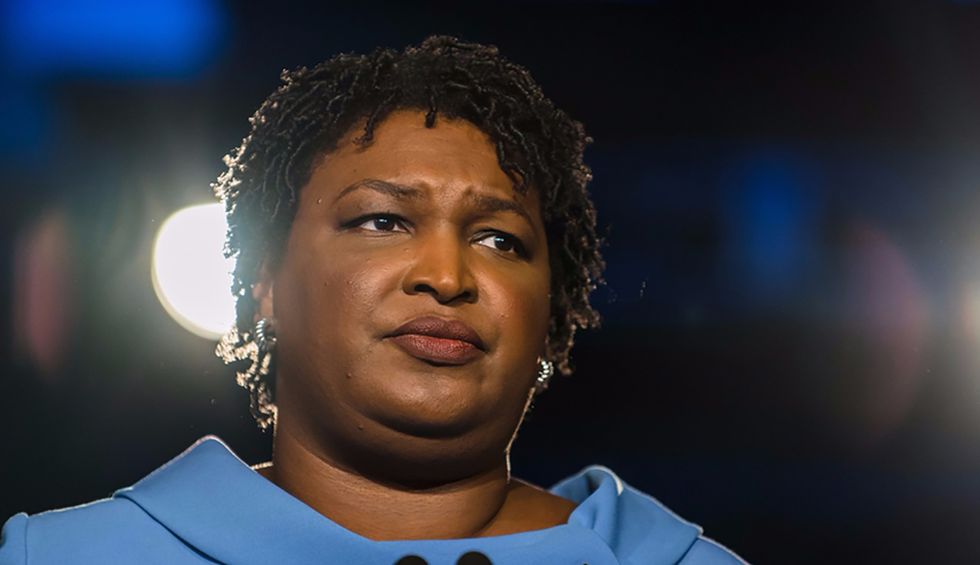 As the 2020 presidential campaign cycle grinds on, there’s renewed concern about the 21st century’s newest form of warfare: cyber-sabotage of government systems, including elections and online disinformation intended to incite unrest. But as Suppressed: The Fight to Vote, a documentary from Brave New Films, makes clear, partisan voter suppression tactics with 20th-century roots remain and can thwart multitudes of voters from changing their state’s political leaders.

Suppressed: The Fight to Vote revisits the most visibly unfair election of 2018: the race for Georgia’s governor between Republican Brian Kemp—then Georgia secretary of state and supervisor of its election apparatus—and Democrat Stacey Abrams, an ex-state legislative leader and voting rights activist who led one of the most vibrant grassroots campaigns seen in Georgia in many years.

The election, which put Kemp in the governor’s seat and which Abrams did not concede, is a showcase of how legal technicalities and opaque bureaucracy ended up discouraging, disqualifying, and disenfranchising purple-state voters who sought a regime change.

“Pull back that veneer [of legal but opaque rules and officials who didn’t help voters], and you see something really rotten happening,” Carol Anderson, chair of African American Studies at Emory University in Atlanta, says as the film opens. “It’s almost like termites coming in. They’re in the wood. They’re eating the wood away. And you don’t even realize your house is getting ready to collapse until it’s almost too late.”

Suppressed’s storyline starts earlier in the decade. In 2013, a GOP-appointed majority on the Supreme Court gutted the core enforcement provision in the federal Voting Rights Act of 1965. Its opinion said that racism in American society had passed. Thus, states and counties that had histories of racial discrimination in elections no longer needed to have any change in election laws and procedures vetted by the U.S. Department of Justice.

This history has been told before, but there is an undeniable power with seeing the faces and hearing the words of people who personally bore the brunt of a menu of suppressive tactics—people who are predominantly non-white. One cannot help but note that race and party are almost always synonymous in Georgia, as they are across much of America.

The documentary follows a chronology that peels back layers of GOP-led suppressive tactics, starting with those that laid a foundation for disqualifying Democratic voters. These include efforts to close longtime polling places in predominantly black and lower-income neighborhoods in locales such as Randolph County, Georgia, which, in a rare glimmer of hope, saw the local populace reverse those poll closures. “The incident that we experienced threw the spotlight on everything else that had been going on,” Bobby Jenkins, a retired superintendent of schools, said. As the film notes, since 2012, Georgia has closed 214 polling places, with 75 percent of closed polls in African American communities.

The “everything else” that Jenkins refers to begins with the starting line of the voting process for individuals: voter registration. The voices of people who were infrequent voters but who received postcards saying that they could be taken off of county rolls followed. That little-understood process of purging rolls is legal, but not mandatory, under the 1993 National Voter Registration Act. Nonetheless, the intended recipients were confused, including seniors who started voting in the 1950s civil rights and the 1960s voting rights movements.

When these Georgians and others submitted more than 53,000 paper registration forms to county officials working under Kemp—instead of going online to register or to update their voter file information—they later found out that there was no state law requiring their applications be processed before the election that they wanted to vote in—2018’s governor’s race. That fall, crowds of otherwise eligible voters did not get a ballot.

There were other disqualifying moves that were legal but unethical. Thousands of infrequent voters were removed from official rolls because they hadn’t voted recently. Other voters were delisted because there were discrepancies in the spelling of their names in the state’s databases—notably driver’s license records did not match voter registration files. Other people were delisted if their mailing address and the address on their voter registration (their domicile for voting purposes) wasn’t the same—including soldiers in overseas war zones.

Again and again, the vast majority of those affected were from communities of color, not Georgia’s better-off white communities. One can argue, as Republicans have, that it is a voter’s responsibility to know the fine print of the process and to satisfy it. But the film makes clear that county election boards following Kemp’s directives were not offering customer service to voters—or, later, helping voters to cast ballots that got counted.

Similar barriers were seen with people seeking to vote by mail, but who never received an absentee ballot. The film notes that more than 280,000 people wanted to vote by mail, but “tens of thousands did not receive them.” The documentary has people recounting their phone calls to local election officials, who, in turn, replied that their request for an absentee ballot had been received, but they didn’t know where their ballot was.

The hurdles kept coming. When it came to voting in precincts on Election Day, many precincts in communities of color did not have enough voting machines compared to precincts in white communities. That shortage, atop delays caused when people learned that they weren’t listed on voter rolls—and protested—caused long lines to form. Many voters had to wait for hours. In some cases, people had to leave to take care of their family members or go to work.

When voters who were not on the rolls insisted on voting, they were given provisional ballots. These are ballots that combine registration information with a regular ballot. But the state requires those voters to return to county election offices within a few days with other ID before those votes are counted. For some people, doing that means lost wages, which is akin to a modern poll tax—the 19th-century practice of forcing black people to pay to vote.

These microaggressions kept coming and cascading. The film shows the grassroots energy of Abrams’ campaign, which was history-making when compared to past Georgia elections. Never before was the state poised to elect an African American woman as governor. But come election night, the results reported Kemp leading by more than 50,000 votes.

Abrams would not concede the race. (Afterward, her advocacy group, Fair Fight, filed one of the most comprehensive voting rights lawsuits in recent years to redress a catalog of suppressive tactics.) The film closes with Abrams’ defiant press conference that came after post-election challenges did not find enough votes for her. Recovering 50,000 votes is unheard of in post-election challenges.

“I acknowledge that former Secretary of State Brian Kemp will be certified as the victor in the 2018 gubernatorial election,” she said. “But to watch an elected official baldly pin his hopes for election on the suppression of the people’s democratic right to vote has been appalling. This is not a speech of concession, because concession means to acknowledge an action is right, true or proper. As a woman of conscience and faith, I cannot concede that.”

Suppressed: The Fight to Vote briefly continues to make the point that these partisan suppressive tactics are not unique to Georgia. The documentary is more than a cautionary tale about voter suppression in one state that, had elections been fairer, would be politically purple as its populace has become more multiracial. The film is a reminder that in 2020 there are many ways to tilt the playing field to game election results.

Many of those suppressive tactics have been around for decades and endure because they are effective. These tactics have nothing to do with Russians or cyber-sabotage. They are as old as America itself—but the victims, as Brave New Films has shown so vividly, are ordinary Americans who believe in democracy’s promise but typically are non-whites.