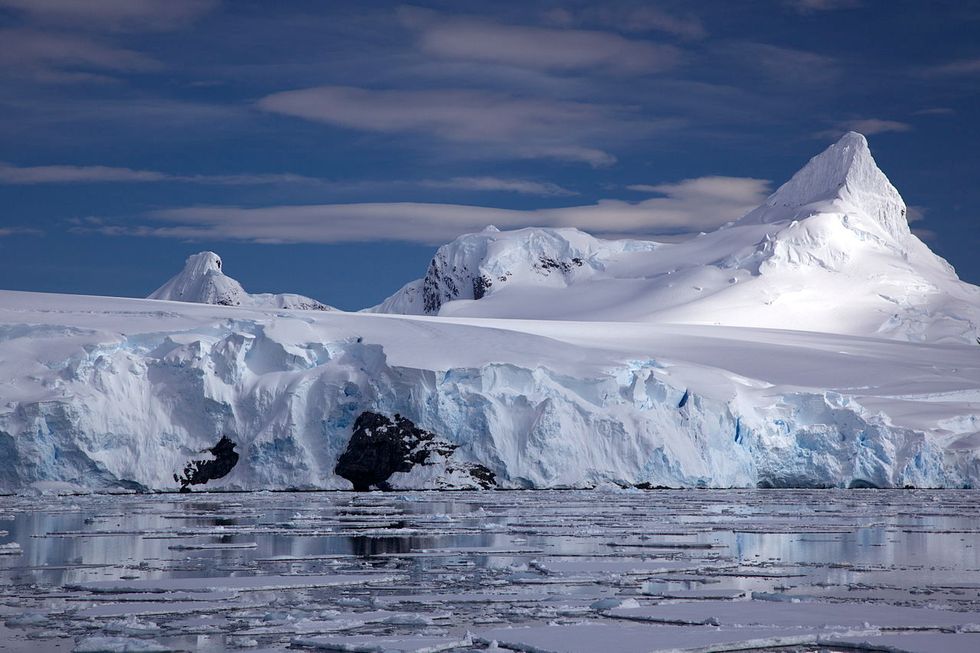 Climate scientists on Friday revealed the latest troubling new observation in Antarctica, illustrating the consequences of the rapid warming of the area brought on by the manmade climate crisis.

As The Guardian reported Friday, researchers stationed at the Esperanza research station at the northern tip of the Antarctic peninsula found that temperatures reached 64.9º Fahrenheit (18.3º Celsius)—the highest temperature logged since scientists began recording the continent's temperature in 1961.

The record-breaking temperature was logged a week after scientists at New York University and the British Antarctic Survey reported that the grounding line of the Thwaites glacier in Antarctica—where the ice meets ocean water—was 32º Fahrenheit.

The record-warm temperature was recorded in one of the fastest-warming regions of the world.

Lewis Pugh, an endurance swimmer and advocate for the world's oceans, posted an image on social media of a swim he took in East Antarctica "to demonstrate how it is changing."

"We need urgent and ambitious action to tackle this climate crisis!" Pugh tweeted.

I swam in East Antarctica to demonstrate how it is changing. Argentinian scientists have just logged a record air… https://t.co/0CG5ppa1Kz
— Lewis Pugh (@Lewis Pugh)1581080212.0

Podcast host and climate advocate Assaad Razzouk added that when the researchers at the Esperanza station recorded the record-warm temperature, the Antarctic peninsula was warmer than the United Kingdom.

The peninsula has warmed by about 5.4º Fahrenheit over the past 50 years. The latest reading broke the previous record of 63.5º Fahrenheit (17.5º Celsius), which was recorded in March 2015.

"The reading is impressive as it's only five years since the previous record was set and this is almost one degree centigrade higher," James Fenwick, a climate scientist at Victoria University of Wellington in New Zealand, told The Guardian. "It's a sign of the warming that has been happening there that's much faster than the global average."

Even minor increases in temperatures in Antarctica alarm climate scientists, especially as researchers have observed the retreat of glaciers and even a massive cavity beneath the Thwaites glacier a year ago.

The consequences of such warm temperatures "are the collapse of the ice shelves along the peninsula," Nerilie Abram, a climate scientist at the Australian National University, told The Guardian.

The void found beneath the Thwaites glacier last year intensified concerns among climate scientists that Antarctica is melting faster than experts have previously believed.

The collapse of the glacier is "completely plausible," Ted Scambos, a scientist at the National Snow and Ice Data Center in Boulder, Colorado, who was not involved with the recent studies, told NBC News at the time.

"Thwaites has a really perfect storm going for it," he added, referencing the findings of Pietro Milillo, a scientist at NASA's Jet Propulsion Laboratory, who last year in a study pointed to "different mechanisms of retreat" leading to the glacier's melting.

While temperatures on the Antarctic peninsula have warmed and the cavity beneath Thwaites has formed, the glacier is retreating at a rate of about 650 feet per year. The melting of the glacier can be attributed to about 4% of global sea level rise, Scambos told NBC News.

Thwaits is often called the "Doomsday Glacier" by scientists, as the collapse of the ice mass could lead to a global sea level rise of two feet, flooding coastal cities all over the world.