Rush Limbaugh’s cancer diagnosis shouldn’t be used to deify him. Here are 5 times he showed contempt for human suffering 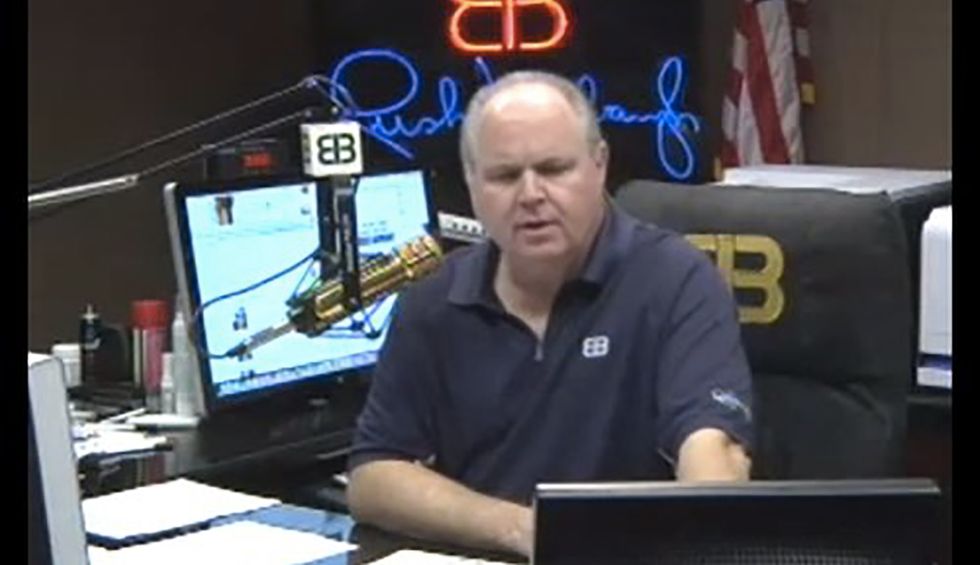 After far-right talk radio host Rush Limbaugh announced that he has Stage 4 lung cancer, Never Trump conservative and GOP strategist Rick Wilson went to Twitter earlier this week and asserted that no one should be celebrating his illness no matter how much they despised his politics. Wilson tweeted, “I’m going to show you how this should be done: I wish Rush a speedy and complete recovery from his cancer. Human being pro-tip: don’t wish cancer on *anyone*...even on your adversaries.”

The Never Trumper is absolutely right: a cancer diagnosis is never something to celebrate. But Limbaugh’s illness doesn’t mean he should be deified or put up on a pedestal, and President Donald Trump was clearly pandering to the extremists in his far-right MAGA base when he chose Limbaugh for the 2020 Presidential Freedom Award.

I just heard the news that Rush Limbaugh has advanced lung cancer. I’m going to show you how this should be done:… https://t.co/uYQXlAFxpT
— Rick Wilson (@Rick Wilson)1580760223.0

Limbaugh has an abysmal track record when it comes to health care. Here are some of the most appalling, idiotic things he has said about the health care and wellbeing of others.

During the 2006 midterms, Parkinson’s disease had taken a harsh toll on actor Michael J. Fox — and Limbaugh responded by mocking his symptoms and claiming, “He’s either off his medication or acting. He is an actor, after all.” Fox was a strong proponent of stem cell research, which President George W. Bush was vehemently opposed to. And to Limbaugh, Fox committed a cardinal sin by disagreeing with the president.

In the 1990s and 2000s, Limbaugh was an unwavering apologist for the War on Drugs and the Prison/Industrial Complex — and he repeatedly insisted that addicts deserved to be thrown in prison. “If people are violating the law by doing drugs,” Limbaugh asserted in 1995, “they ought to be convicted — and they ought to be sent up.” But in 2003, it turned out that the hypocritical Limbaugh was seriously addicted to painkillers and was abusing OxyContin and hydrocodone in violation of the drug laws he had been applauding.

However, Limbaugh didn’t volunteer for a prison sentence. Evidently, he believed that mass incarceration was only appropriate for the poor.

3. Limbaugh insisted there was ‘nothing wrong’ with the American health care system.

After being hospitalized in Hawaii for chest pains in 2010, Limbaugh showed his cluelessness about the state of health care in the U.S. when he declared, “I don’t think there’s one thing wrong with the United States’ health system.” And he was lambasted for overlooking the fact that while the health care system in the U.S. was working well for millionaires and billionaires, it wasn’t working well for all the Americans it left bankrupt and all the Americans who died because they couldn’t afford treatment.

I remember when Rush Limbaugh,laughed & joked about Eric Garner not being able to breathe. Rush ridiculed & mocked… https://t.co/zpNJUR8wjL
— San (@San)1580775751.0

4. Limbaugh insisted that protests following Eric Garner’s death were based on ‘made up’ grievance.

On July 17, 2014, New York City resident Eric Garner died as a result of being placed in a chokehold by NYPD officer Daniel Pantaleo. Garner, who was being arrested for selling loose cigarettes — hardly a capital offense — repeatedly said, “I can’t breathe.” But to Limbaugh, Garner’s death had nothing to do with racism or excessive force, and the protests that followed were “not based on real-world grievance,” but rather, “grievance that’s being amplified and made up.”

So Rush Limbaugh has advanced lung cancer. And as a liberal lefty who disagrees with everything he has ever said an… https://t.co/xQvEBISZuc
— Jesse Cox (@Jesse Cox)1580761152.0

Cigarette smoking is the #1 preventable cause of lung cancer in the U.S. and other countries, but that hasn’t kept Limbaugh from repeatedly making the idiotic claim that liberals in the media and the medical establishment are exaggerating the harm that cigarettes cause — especially in lower income communities, where Americans are more likely to smoke. Moreover, Limbaugh (a former cigarette smoker) has maintained that second-hand smoke is perfectly harmless and has asserted, more than once, that cigarette smokers deserved a “medal” for smoking.