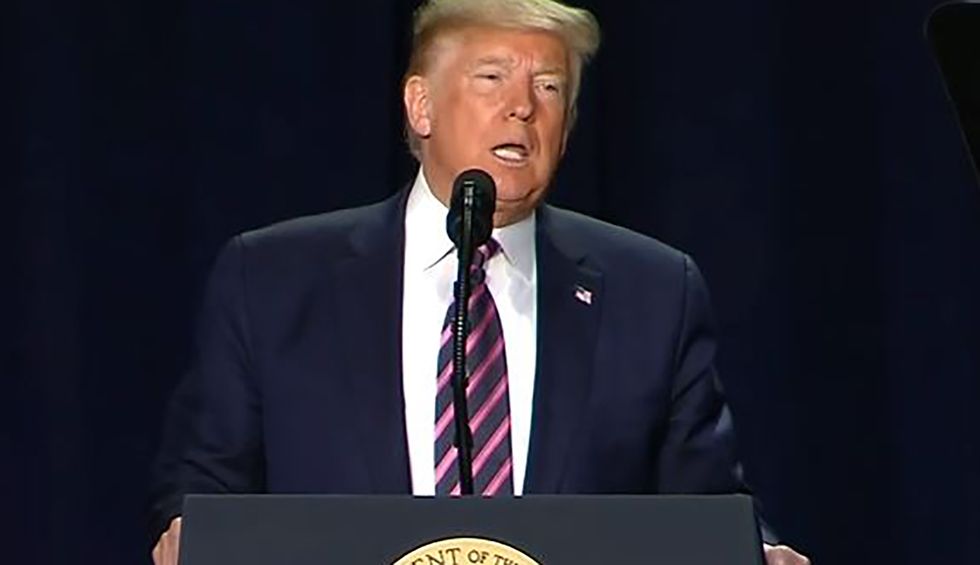 Donald Trump’s legal troubles have had an unexpected result – the proclamation of a view of the Presidency, in which Trump is legally untouchable and newly all-powerful. The head of the party of limited government has proposed a theory of American democracy, the unlimited Presidency, and the rest of his party has fallen into line.

The district attorney of Manhattan is trying to obtain Trump’s financial records, including tax returns, in the case about whether the payments to Stormy Daniels by his former lawyer, Michael Cohen, then reimbursed by Trump, were legal. William Consovoy, Trump’s lawyer, told the 2nd Circuit Court of Appeals that as President, Trump is immune from the entire judicial system. Consovoy said that if Trump shot someone on Fifth Avenue, he could be charged with a crime only after he is out of office.

After the hearings about the Mueller investigation, Trump said in a speech about the Constitution in July 2019, “Then, I have an Article II, where I have to the right to do whatever I want as president.”

Trump’s impeachment defense team based their case on a belief that the Presidency is much more than one of three separate and equal powers. Alan Dershowitz argued during the impeachment trial in the Senate that anything a President does to help his re-election is in the public interest, and thus not impeachable.

In a tweet about the recent legal case of Roger Stone, Trump insisted that he has a “legal right” to intervene in criminal cases.

Trump often asserts that he has the “absolute right” to do what he likes. Last April, he said he had never “ordered anyone to close our southern border,” but he could do it if he wanted. After he was criticized for revealing classified information to Russian officials in 2017, Trump said he has an “absolute right” to release such material to foreign powers.

The Associated Press has counted at least 29 times since his election that Trump has said he has an “absolute right” to wield executive authority. One example is his claim that he could end birthright citizenship by executive order, even though it is assured by the 14th amendment to the Constitution.

Trump’s absolute right is tolerated with silence by the same Republicans who screamed “dictator” when President Obama issued an executive order offering deportation relief to DACA children. “Why is @BarackObama constantly issuing executive orders that are major power grabs of authority?” Trump tweeted in 2012. Gov. Chris Christie of New Jersey said, “He’s not a king, he’s not a dictator, he’s not allowed to do it himself.” House Speaker John Boehner said Obama was acting like a “king or emperor.” He said Republicans “will not stand idle as the president undermines the rule of law in our country and places lives at risk.” Now Republicans are nervously standing by as Trump declares himself above all law.

Trump appears to argue that he can exercise absolutely all powers that are not specifically denied to the President in the Constitution. But he goes further. Two key powers are explicitly vested in the Congress by the Constitution: power of the purse and power to declare war.

When the Congress did not appropriate funds for Trump’s beautiful wall, he ignored their decision, declared a national emergency, and then diverted funds which the Congress had appropriated for other purposes. Although majorities in House and Senate voted for a resolution to end the “emergency”, only a dozen Republican Senators out of 53 voted to reject Trump’s arrogation of new powers. One of those Republicans, Susan Collins of Maine, co-sponsored the resolution. She said, “The question before us is not whether to support or oppose the wall, or to support or oppose the President. Rather, it is: Do we want the Executive Branch — now or in the future — to hold a power that the Founders deliberately entrusted to Congress?” But she didn’t believe that idea strongly enough to vote for Trump’s impeachment.

Last week, the Senate passed the Iran war powers resolution that limits Trump’s ability to wage war against Iran. Eight Republicans voted with Democrats to pass the bill 55-45. The House passed a similar bill last month 224-194, with only 3 Republicans voting for it. Only a small minority of Republicans is willing to challenge Trump’s theory of the unlimited presidency.

The other modern example of a President asserting absolute rights in instructive. When David Frost interviewed Nixon in 1977, three years after he had resigned, he asked, “Would you say that there are certain situations – and the Huston Plan was one of them – where the president can decide that it’s in the best interests of the nation, and do something illegal?” Nixon famously replied, “Well, when the president does it, that means it is not illegal.” The so-called Huston Plan was the plan hatched by Nixon and his advisors after he had been in office for 2 years and the bombing of Cambodia in 1970 had unleashed massive popular protests. Here’s the Plan: “The report recommended increasing wiretapping and microphone surveillance of radicals – relaxing restrictions on mail covers and mail intercepts; carrying out selective break-ins against domestic radicals and organizations; lifting age restrictions on FBI campus informants; and broadening NSA’s intercepts of the international communications of American citizens.” FBI Director J. Edgar Hoover and the National Security Agency, who would have to carry out the illegal activities, convinced Nixon to abandon the Plan. But according to Nixon years later, those illegal actions cannot be illegal if he initiates them.

That appears to be where Trump is heading. The most illegal Presidents wish to abolish the possibility that the President can commit a crime.

It is not surprising that a president so unconcerned about Constitutional norms would try to add to his powers. It is disturbing and dangerous that the Republican Party as a body supports Trump going far beyond what they harshly denounced just a few years ago. Republican Congressmen and -women are sitting by while Trump amends the Constitution by fiat.