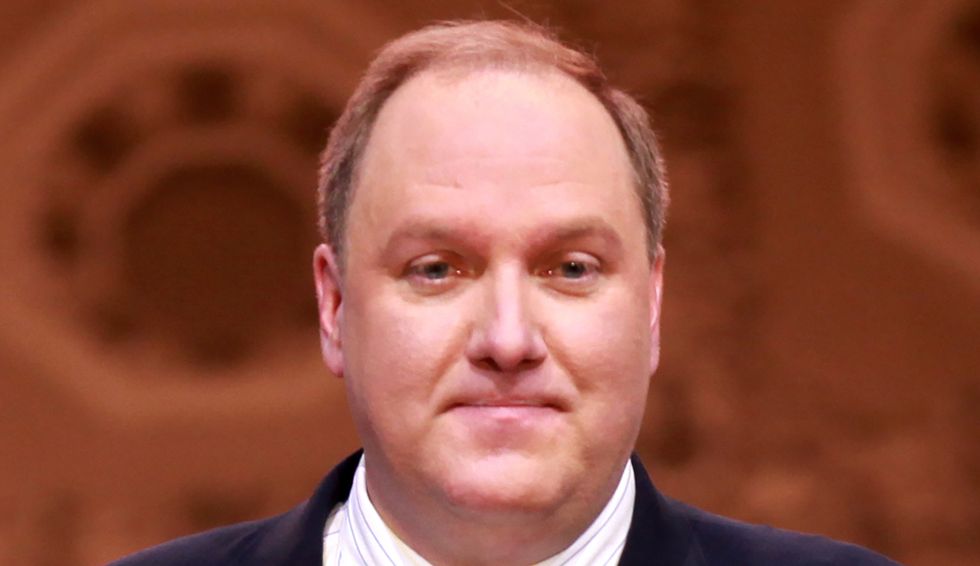 President Donald Trump's sprawling Ukraine scandal consumed Washington politics for months and led to the third Senate impeachment trial of a president in U.S. history. Among the casualties in the uproar was the reputation of John Solomon, a writer for The Hill and personality on its online streaming channel, who was directly implicated in spreading misinformation at the heart of the scandal.

A new piece published by The Hill on Wednesday heavily scrutinized Solomon's work for the outlet, pointing out conflicts of interest, errors in judgment, and failures on his part and that of the editorial process. But there are key questions that remain unanswered about Solomon's role at The Hill, questions that demand more scrutiny for the outlet itself as it enabled the disgraced reporter.

Solomon and the Biden story

Solomon, who no longer works for The Hill but contributes to Fox News, received a scathing review in the new piece. In particular, his writing about former Vice President Joe Biden's connections to Ukraine demonstrate significant failures on journalistic ethics.

His writing played a major role in supporting the false narrative that Biden had corruptly involved himself as vice president in Ukrainian politics to protect his son, Hunter Biden, who was working for the energy company Burisma in the country. As is now well known, Biden, with the backing of President Barack Obama's administration, intervened in Ukraine in 2016 to oust Prosecutor General Viktor Shokin. Solomon's columns, The Hill noted, supported the widely debunked notion that Biden was attempting to protect his son by undermining Shokin's efforts to investigate Burisma. This allegation formed the basis of Trump's demand over the course of many months in 2019 that Ukraine investigate Biden, his potential 2020 rival. The House of Representatives later determined this action to be a corrupt abuse of power, an illegitimate interference in the upcoming election, and an attempt to solicit a bribe.

But the claim remains unsupported and is contradicted by known facts, and Solomon's basis for pushing the allegations appears highly dubious. Shokin, who was widely viewed as corrupt, was one of the people Solomon interviewed for his research, The Hill reported, even though his "reliability as a source is in question."

"In certain columns, Solomon failed to identify important details about key Ukrainian sources, including the fact that they had been indicted or were under investigation," the piece noted.

And Rudy Giuliani, Trump's personal lawyer who acted as his point person in the Ukraine matter, said he was a key source for Solomon's reporting as well, though Solomon denies it. Solomon did, however, work with Giuliani associate Lev Parnas, who has since been indicted on charges of conspiracy and campaign finance law violations. The Hill said the extent and nature of Solomon's work with Parnas "remain unclear but potentially troubling." Parnas has turned over evidence that indicates extensive involvement with Solomon, Giuliani, and others.

Solomon also quoted or referred to lawyers Joe DiGenova and Victoria Toensing, who represent clients with interests in Ukraine and some of the figures in the broader scandal. But Solomon did not disclose when referencing the pair that they also represented him legally. And The Hill noted that Solomon shared a draft of one of his columns with Parnas, diGenova and Toensing, in violation of the outlet's editorial policy.

Was The Hill concerned about Solomon before his role in the Ukraine scandal was revealed?

In response to these and other serious problems in Solomon's work, The Hill announced it will devote itself to implementing eight lessons learned from the episode. It also has added editor's notes to Solomon's columns to add more context or disclosures "that should have been highlighted at the time of his writings." While this kind of public admission of failure and commitment to accountability is welcome and appropriate, there are some gaps in the outlet's account.

Most notably, one event recounted in the piece remains underexplained: "Solomon also wrote numerous news articles for The Hill in 2017 and 2018. An editorial decision was made to label Solomon’s work as opinion as of May 14, 2018."

For close followers of political journalism, this fact was always notable about Solomon's work. Though The Hill typically has a sharp delineation between opinion pieces and news pieces, Solomon's writing clearly blurred the line. For example, one headline read: "Ukrainian Embassy confirms DNC contractor solicited Trump dirt in 2016." This sounds like it would be a normal news story at The Hill, but it was nevertheless labeled as an opinion piece.

The Hill acknowledged this problem:

While Solomon's columns on Ukraine were labeled as opinion, they largely read like news stories. Adding to the potential confusion between opinion and news, Solomon was identified as "an award-winning journalist" in his column tagline. When appearing on television to discuss his Ukraine columns, Solomon was not typically labeled an opinion writer by the broadcast programs. The Hill did not contact television producers to label Solomon as an opinion columnist. It should have.

Lending further support to an impression that the columns were more like news stories, rather than opinion columns, Solomon’s Ukraine columns were longer than typical opinion pieces, in many cases contained what could be viewed or was identified by him as original reporting, and stuck to one general topic. This may have suggested to many readers it was an investigative series, which normally resides in the news department, rather than opinion. Solomon’s subsequent appearances on Fox News where he was often identified as an investigative journalist further potentially blurred the distinction between news and opinion in the minds of some readers.

Every news outlet is free to set its own standards, and the delicate balance between news, analysis, and opinion can be handled in a variety of ways. But The Hill acknowledged that Solomon's work violated the standards it tried to set for itself, with the effect of potentially confusing readers.

But most critical is that The Hill changed the way it described Solomon's columns' in 2018. While once they were considered news, they were afterward considered opinion. What changed? No explanation is given.

The change is critical because it points to The Hill's responsibility for Solomon's work. Were his editors suddenly concerned about the nature of his work? Did they feel he was less credible than he had been before? Did they believe his previous credibility had been overrated? Importantly, pieces by opinion contributors such as Solomon in The Hill bear the tagline: "The views expressed by contributors are their own and not the view of The Hill."

If there were concerns about Solomon's reliability and the accuracy of the reporting, they were certainly warranted. As the review and subsequent events have shown, Solomon's claims and reporting in his columns were highly dubious and in violation of journalistic standards.

But if this was the reason for designating his columns as opinion rather than news, the switch was wholly insufficient. As the review published Wednesday noted, "opinion" pieces aren't free from the standards of journalism; they are "vetted for accuracy, conflicts of interest, and other relevant factors; when statements of fact are found to be incorrect, or conflicts of interest are found to have been undisclosed or overlooked, The Hill routinely corrects those or adds clarifications to columns."

The worry, then, is that The Hill had reason to suspect Solomon's reporting was dodgy, but it kept printing his columns anyway. Why would it have done this? One possible reason: Solomon's pieces were quite popular and gained traction in right-wing circles. As the review noted:

Starting in March 2019, Solomon wrote a series of columns on Ukraine, former Vice President Joe Biden and his son, Hunter Biden, as well as U.S. diplomats in Ukraine. Solomon discussed his columns on television, most notably on Sean Hannity's opinion show on Fox News. These appearances amplified the reach of Solomon's work at The Hill.

The publication of Solomon's columns was enormously consequential. It helped further a negative narrative about Biden that is, by all appearances, entirely baseless, which could have impacted his standing in the 2020 primary election. It may have even helped lead to the impeachment of Trump.

It's worth asking, then, what The Hill's editors knew about Solomon's work and when they knew it.

AlterNet reached out to The Hill with questions about Solomon's role and why his pieces were designated as opinion. This story will be updated with any response.