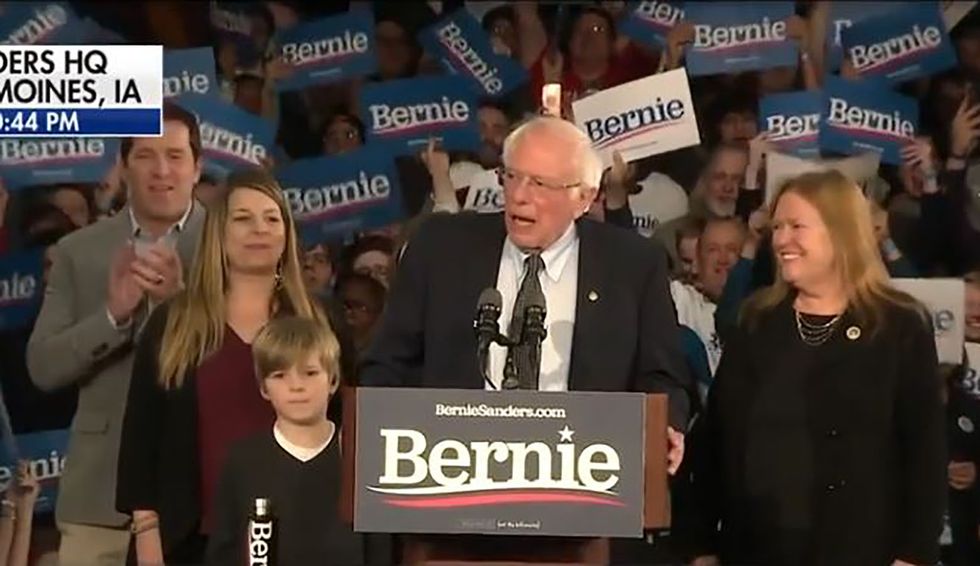 "The story of the night is that Bernie Sanders is the favorite to win the Democratic nomination, because he's got a lock on one wing of the party, and there's still a gaggle of moderates splitting the anyone-but-Bernie vote," tweeted Slate writer Jordan Weissman. "Why is this so hard for people to see?"

Sanders took New Hampshire by a count of around 4,000 votes with 90% reporting at press time. He was declared the winner around 11 pm, a little less than three hours after polls closed.

Reuters, in a Twitter headline, didn't even mention the senator, instead centering Buttigieg and Klobuchar's stories and ignoring the winner of the vote.

Washington Post coumnist Jennifer Rubin, a Sanders foe who wrote in January that the Iowa caucuses didn't matter after writing the opposite in May 2019, took to her paper's opinion page just before midnight to declare the victory by the Jewish democratic socialist independent in the opening two Democratic contests "not the big story coming out of New Hampshire."

That belief was shared by New York Times reporter Trip Gabriel, who didn't include the Sanders victory in his big two stories of the night.

Gabriel's Times colleague Jeremy Peters claimed that Buttigieg, despite losing in human vote totals to Sanders in both contests, should be considered a front-runner.

Sanders didn't get the headline on the Times print edition, according to the paper's print editor, who posted the front page online—rather, Klobuchar got the top spot.

Meanwhile, on cable news network MSNBC—where the negative tone of the coverage of Sanders over the primary season netted the Vermont senator at least one vote on Tuesday—graphics on the screen's lower chyron as results continued to come in used the total delegate counts from both contests rather than the vote totals in New Hampshire. Those totals, due to Iowa's allocation rules, favor Buttigieg even though Sanders won the Hawkeye State's vote.

I love how @MSNBC has managed to make it look like #bernie lost by showing the overall delegate count at the bottom… https://t.co/SPJS5R6nlO
— Jesse Benn (@Jesse Benn)1581483526.0

Earlier in the evening, MSNBC personality Joy Reid, who has frequently criticized Sanders for his refusal to register as a Democrat and his history as an Independent, appeared to endorse the idea of former New York City Mayor Mike Bloomberg, who was for a long time a registered Republican, becoming the Democratic nominee because "if you want a Democrat to  win, you have to fight like a Republican."

"And he is a Republican," Reid added of Bloomberg.

MSNBC regularly has the most negative coverage of Sanders of the three major cable news networks.

As The Intercept's Mehdi Hasan noted in an opinion piece ripping the media for their inability to understand the Democratic electorate and the Sanders movement, this marks the second time in four years that the establishment has failed to see Sanders coming.

Do they never learn? For the second presidential cycle in a row, the political pundits have had to eat crow. During the 2016 race, former Obama strategist David Axelrod dismissed Sanders as the candidate with whom Democratic voters would only "flirt" or have a "fling" with. The Vermont senator went on to win 13 million votes and 23 states.

Brandon Sutton, co-host of left-wing podcast The Discourse, expressed doubt that the media attacks on Sanders would have a major effect on the campaign but opined that there may be some harm done to the institutions themselves.

"How much the media refusing to acknowledge Bernie as the frontrunner actually hurts him is debatable," said Sutton. "However, I do think being so out of step with what voters are saying is going to be another blow to their already heavily damaged legitimacy."