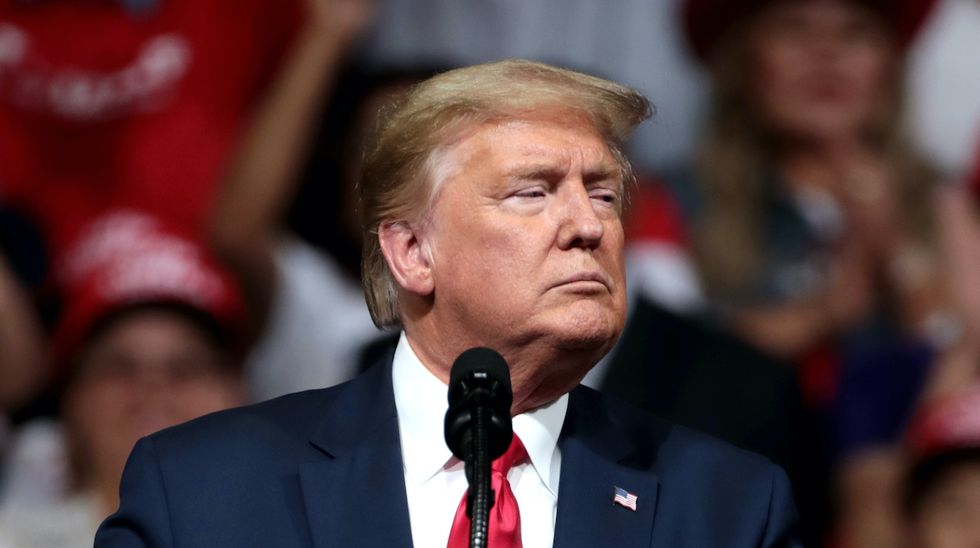 President Donald Trump's distinctive way of speaking and employing rhetorical techniques can be bewildering, embarrassing, enthralling, disconcerting, disarming, and disorienting. But, for all his faults, it has clearly been, at least to some extent, effective. Through his manipulation of the media and his connection with a powerful group of voters, he won the presidency, which has offered him an even larger platform to communicate with the people.

To better understand Trump's use of language — its strengths and its pitfalls — I spoke with Roderick Hart, a professor of communication studies at the University of Texas at Austin. He wrote the book "Trump and Us: What He Says and Why People Listen" analyzing the president's use of language and the effects it has on the population. He described to me why Trump's rhetoric makes him stand out as a politician, and why it could present him with unique dangers in the present moment.

Trump, Hart explained, is unique among modern politicians in his use of emotion. While other candidates have used emotional language and themes before to connect with their audiences, Trump "provides an accessibility to his emotions" that most politicians instinctively avoid.

"To me, the thing that’s really distinctive is his willingness to follow his emotional trail as far as it will go and to do it in public," Hart said.

Anyone can see this happen in real-time by simply tuning in to one of his many campaign rallies. Much of his speech is an airing of personal grievances, targeting political enemies, members of the media, or former officials he now loathes. He seethes with fury behind a lectern, and observers feel they have a transparent view of his emotional state. It's like he lets people "crawl inside his psyche," Hart said.

Of course, these rants are typically filled with lies, which have been extensively documented. While no politician is uniformly honest, Trump has taken political deception to a new level in contemporary American politics. And this widely known fact presents something of a puzzle about Trump: given that he's broadly and accurately viewed as an unrepentant liar, why is he also repeatedly characterized as "authentic"? Isn't dishonesty the antithesis of authenticity?

Hart explained that there are two senses of authenticity. First, there is a legalistic or journalistic sense in which we might say someone or something is "authentic" if its assertions match up with reality. Trump is certainly not authentic in this way.

But he is, Hart argued, emotionally authentic. When Trump rages against former FBI Director James Comey onstage, he may be making up facts and falsely alleging that Comey committed crimes. But few doubt that Comey really does inspire real rage in the president, and when he expresses that to an audience, it is genuine. Observers can pick up on that sense of authenticity, and some respond quite favorably to it.

This kind of authenticity also gives Trump leeway in the eyes of his supporters that politicians rarely get. Because fans of the president feel attuned to his emotional state, it's simply less important to them whether the claims he makes are factual. Hart said the Trump's supporters will acknowledge that something he said isn't true, but then claim that they "know what he meant." They think they know what he means because they think they know what he feels.

It's more akin to the way people treat their friends than the way they typically treat politicians. Because you feel emotionally connected to a friend, you can give them the benefit of the doubt when they make a mistake; you can believe that an error in judgment doesn't reflect their true intentions. Trump gets that same latitude from his followers because he has established an emotional connection, even though, as president, giving him too much leeway essentially means letting him wield extreme power without accountability.

But while Trump's focus on emotional rhetoric has in many ways been an asset for him, it may now be a liability.

Hart observed that Trump's use of language doesn't lend itself well to communicating complicated and technical subjects, such as the public health implications of the new outbreak of the coronavirus Covid-19.

"It’s a great danger from him, because it’s about science," Hart said. "Anytime there’s a technical issue, he’s at a tremendous disadvantage."

I argued that his press conference on Wednesday addressing the emerging crisis primarily served to reveal his ignorance on the subject. And this is exactly what we should expect from Trump based on Hart's analysis, who sees the president as someone who prioritizes his feelings over the facts. When Trump doesn't know what to say, he often rambles and talks in vague generalities. He makes overindulgent use of superlatives and adjectives, such as "great" and "tremendous." But when the public wants actual answers about a serious threat to the nation's health, this kind of talk isn't sufficient.

"He knows he can’t hold a complex thought for more than 11 seconds. He can’t handle specifics," Hart noted.

This isn't only bad for Trump. It's a danger for all of us at a time when we need clear and cogent communication from the government to understand a growing peril.

How Trump's opponents can counter his tactics

So how should those politicians who hope to oust Trump from the White House approach a campaign against the president?

Hart cautioned against blowing Trump's rhetorical excesses out of proportion, disagreeing with those who see him as a "deranged creature."

To counter this kind of person, opponents should handle him like they would a schoolyard bully, Hart said.

Candidates shouldn't be afraid to talk about the way Trump uses language and the fact that it makes him come off "emotionally unhinged," in Hart's words. Calling out Trump's extreme nature could help defuse its appeal, especially if it's done in a deliberate and calm manner.

Eventually, Hart suggested, Trump's rhetoric may lose its appeal. Perhaps it was what a certain segment of the population was clamoring for in 2016, but it can grow "overweening and boring." Perhaps, if Trump loses in 2020, it will be because some people just got tired of his shtick.