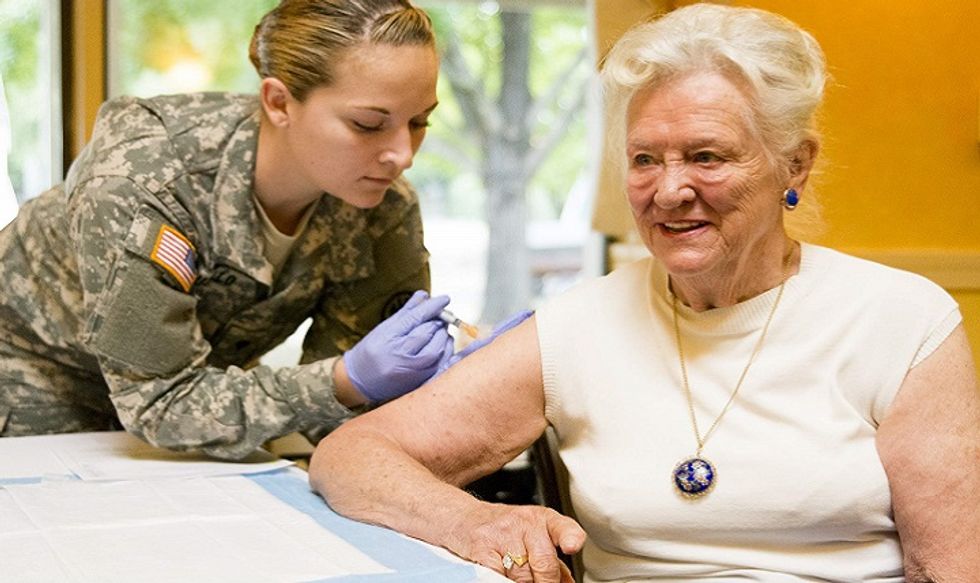 August marks National Immunization and Influenza Awareness Month. According to U.S. Army Surgeon General Lt. Gen. Patricia Horoho, getting vaccinated for influenza is the most important step community members can take in the next few months to ensure they are healthy this coming flu season. Vaccines are vital in improving the health of Soldiers, families and retirees. Soldiers should remind family and friends how important vaccinations are to their health in order to be resilient this coming flu season. For more information, visit www.healthfinder.gov/NHO/Augusttoolkit.aspx. (Joint Base Myer-Henderson Hall PAO photo by Rachel Larue)
The Conversation
February 18, 2020Personal Health

The best way to protect against the flu is the flu vaccine. But even so, about 60% of Americans will skip getting a flu shot this year.

This can be especially frustrating when it is a friend or loved one who is putting themselves and those around them at risk. We arebehavioral scientists, and we wanted to know: How do you convince someone to get the vaccine?

The flu shot doesn’t just benefit the person who gets it. It also helps protect everyone around the vaccinated person, such as the very young, the very old and people whose immune systems are compromised. People in these groups often cannot get the vaccine, or it is less effective for them.

We would love to tell you that a logical presentation of facts like those we listed above is the best method for convincing someone. Unfortunately, it usually isn’t.

It really seems like we should just be able to tell our spouse, uncle or babysitter how the vaccine works, what it does for us and why it’s important, and then, watch them run straight to the nearest immunization clinic.

The surprising truth is that telling people the facts about the flu shot just doesn’t work.

However, our research, funded by the Robert Wood Johnson Evidence For Action program, has found that showcasing the flu shot in different ways – like explaining what a good deal it is – can be much more convincing.

For instance, even though the true cost of getting a flu shot is typically between US$40 and $70, most people can receive one free or for about $10 by using insurance, an employer’s program or finding a community clinic.

That’s a 75% to 100% savings. If televisions were offered at that discount, people would be lined up out the door of Best Buy.

These studies have shown that some of the consumer excitement people feel when getting great discounts on household goods can be transferred to preventive care activities, like flu shots.

Reminding people what a great deal flu shots are is a much more effective strategy to increase interest than listing the health and societal benefits. In our studies, it’s been even more effective than showing a 30-second informational video about flu shots from the CDC website.

So now your friend or loved one is a little more interested, maybe even willing to get the shot. How do you make sure they will follow through?

If it’s your spouse or child, you might be able to make them an appointment.

In a separate set of studies, we found that signing up people for a specific date and time to get a flu shot – without asking them for convenient dates or knowing anything about their schedules – was 36% more effective at driving flu shot uptake than sending an email that asked people to click to make an appointment.

Even though some people changed their appointment date or time, and some didn’t show up, more people who received a randomly assigned appointment got the flu shot than those who had to make their own appointments.

If you can’t just make them an appointment, you can also nudge them to create what’s called an “implementation intention,” or a concrete, specific set of plans about when and where something will happen.

Implementation intentions increase the likelihood of getting the flu shot by as much as 4.2%. For example, will they go to the pharmacy near their house for the vaccine? When will they do it?

Tying it to specific activities can help them remember – like “after dropping off the kids at soccer practice on Saturday morning I will stop by the CVS on the corner of Main Street to get a flu shot” – is a great implementation intention.

Help the person develop an implementation intention by asking simple questions or making suggestions about when and where they might be able to get the vaccine.

Encouraging them to write them down – or even better, set a reminder in their phone or calendar – can also be helpful.

The flu is no joke

Though the optimal time to get a flu shot is much earlier during the flu season, it is not too late to get the shot, as the season sometimes goes as late as May.

The flu kills hundreds of thousands of people every year around the world and debilitates millions more. The best prevention is getting the flu vaccine.

They will protect their health and get a great bargain too.