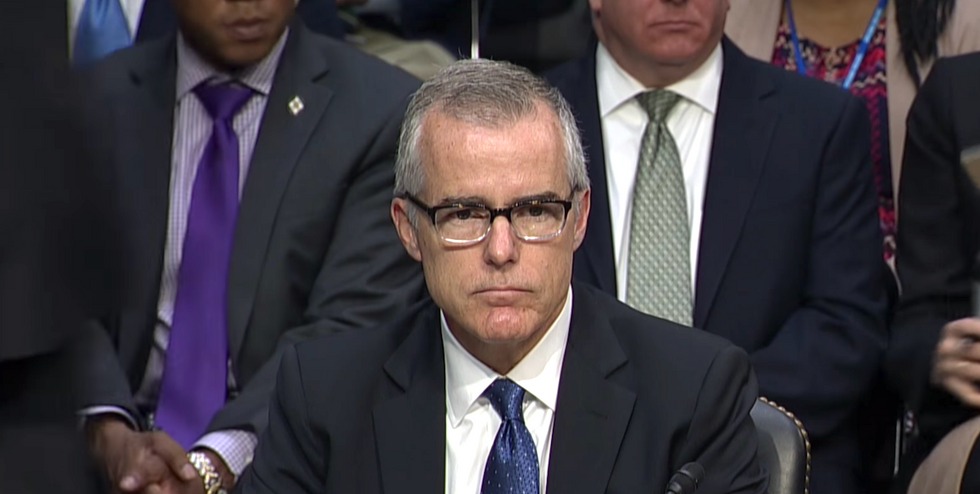 Former Deputy FBI Director Andrew McCabe, who served under Director James Comey, will not be facing criminal charges, according to multiple outlets on Friday including the Washington Post.

After the reports broke, CNN's Jake Tapper shared a copy of the letter the Justice Department sent to McCabe confirming the report:

DOJ tells former Acting Director of the FBI Andrew McCabe that it will not pursue charges against him. https://t.co/imAyjZs9Nq
— Jake Tapper (@Jake Tapper)1581700565.0

The news indicates that President Donald Trump's hopes to have a perceived enemy punished have been dashed, at least for now. As the Post reported Thursday night, Trump has been seething and raging at his aides that people like McCabe, Comey, and Hillary Clinton haven't been prosecuted by the Justice Department.

The department could make the decision public in the coming days, the people said, though the exact mechanism for their doing so remains unclear. The move will surely infuriate Trump, who has raged publicly and privately in recent months that McCabe and others he considers political enemies should be charged with crimes.

McCabe came under scrutiny for remarks he made to the Justice Department inspector general and FBI officials in an investigation about media contacts. He reportedly misled the IG about information that he conveyed to the media about investigations about Clinton during the 2016 election. He has said, however, that this was not intentional and that he later corrected his errors.

Clearly, though, Trump does not care about McCabe's treatment of Clinton. His fury at the former deputy director arises from McCabe's role in the Russia investigation. McCabe has revealed that he authorized a counterintelligence investigation into the president himself after Trump fired Comey in an apparent effort to undermine the Russia probe.

Some reports have suggested a grand jury may have previously refused to issue an indictment against McCabe despite the Justice Department's efforts, but the details of these events remain murky.

"Based on what we know publicly, this was the right result. There wasn’t enough evidence to bring a case against McCabe, and there were legitimate concerns that the matter wouldn’t have gone as far as it did if it weren’t for Trump’s hatred of McCabe," said CNN legal analyst Renato Mariotti.