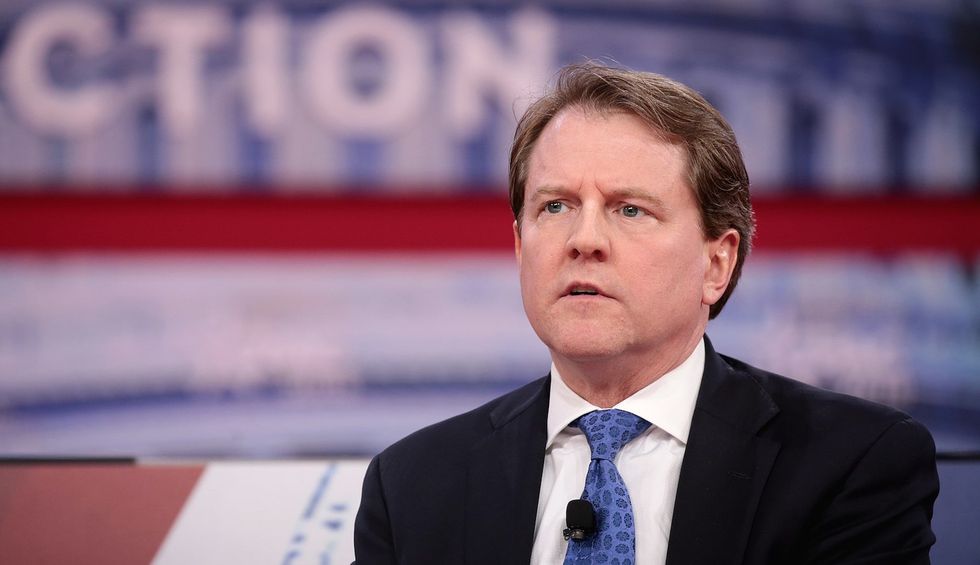 The majority, led by two Republican-appointed judges, sided with President Donald Trump's effort to block McGahn's testimony, subpoenaed by the House of Representatives as part of Democrats' oversight efforts. As a key witness in Special Counsel Robert Mueller's investigation, McGahn could provide illuminating testimony to describe some of the most damning episodes of what could constitute criminal obstruction of justice by the president.

But the administration has sought to block McGahn's testimony, claiming he has "absolute immunity" from testifying. In court, the Justice Department has argued that the judicial branch shouldn't be involved at all in an effort by Congress to compel testimony from an administration official. On Friday, the court agreed.

"The [House Judiciary] Committee’s suit asks us to settle a dispute that we have no authority to resolve," the opinion said. "[We] lack authority to resolve disputes between the Legislative and Executive Branches until their actions harm an entity 'beyond the [Federal] Government.' ... Without such a harm, any dispute remains an intramural disagreement about the 'operations of government' that we lack power to resolve."

This is a highly dubious position, and many legal experts have argued that it is wrong. The courts should be able to compel executive branch officials to comply with congressional subpoenas unless they have a credible legal argument in their favor. Democrats will likely continue to appeal the case up to the Supreme Court.

But putting aside the merits of the court's view, its argument — which was promoted by Trump's Justice Department — completely undermined one of the key defenses of the president during his impeachment trial.

Trump was charged by the House of Representatives with abusing his power in the Ukraine scandal as the first article of impeachment. But the second article of impeachment charged Trump with obstructing Congress's investigation into the scandal, by blocking witnesses from coming forward and withholding documentary evidence. Many of the president's defenders dismissed the obstruction of Congress charges, saying that the House should have tried harder to obtain witnesses and evidence by going through the courts. Republican Sen. Marco Rubio of Florida even called the article fo impeachment "frivolous."

At the time, though, the House impeachment managers pointed out that even as Trump's lawyers made this argument, Justice Department lawyers were making the opposite argument. The Justice Department said, as D.C. Court of Appeals has now agreed, that the courts were an inappropriate venue for the dispute and that Congress and the executive should work it out between themselves.

Trump's overall position, then, was either a contradiction or an assertion of near-absolute power. He was essentially saying there was no way for the Congress to obtain the evidence it needed to impeach him.

But in the new ruling on Friday, the court explicitly listed impeachment as one of the remedies Congress can turn to in order to resolve the dispute without turning to the judicial branch:

The absence of a judicial remedy doesn’t render Congress powerless. Instead, the Constitution gives Congress a series of political tools to bring the Executive Branch to heel. ... Congress (or one of its chambers) may hold officers in contempt, withhold appropriations, refuse to confirm the President’s nominees, harness public opinion, delay or derail the President’s legislative agenda, or impeach recalcitrant officers. ... And Congress can wield these political weapons without dragging judges into the fray.

If this is right, then the GOP arguments for acquitting Trump on the obstruction of justice charge were entirely bogus.

This fatal flaw in the impeachment defense was evident at the time, but Republicans simply refused to acknowledge or address it. Now that the impeachment process is over, of course, they'll surely insist the matter is history or just continue to ignore it altogether. But the new ruling highlights the corruption of the GOP, and helps forever stain the impeachment trial of Trump as an outright fraud.