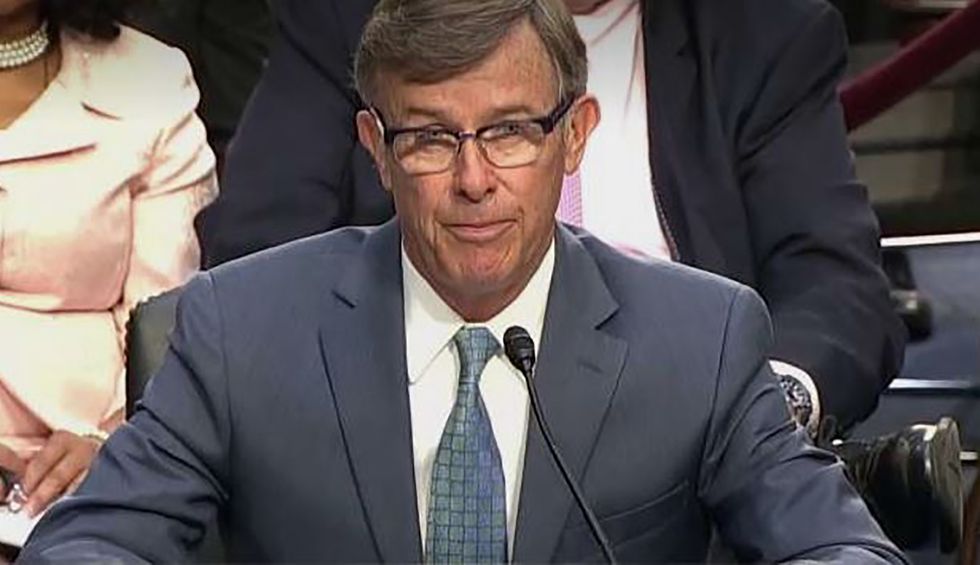 President Donald Trump fired Acting Director of National Intelligence Joseph Maguire and replaced him with Richard Grenell — who had been U.S. ambassador to Germany — shaking up the office of the top intel chief. Trump’s critics have been quick to point out that Grenell, a Trump loyalist, has no intelligence experience.

And two intel experts, John D. Negroponte and Edward M. Wittenstein, warn in an op-ed for the Washington Post this week that Trump is putting the U.S. at risk by politicizing intel in this way.

Negroponte served as director of national intelligence from 2005-2007 under President George W. Bush, while Wittenstein is a former DNI executive assistant who now lectures on global affairs at Yale University. And both of them find it disturbing that the Office of the Director of National Intelligence has been in such turmoil during Trump’s presidency.

“Make no mistake: the Trump administration’s continued failure to nominate a qualified, permanent DNI since the abrupt resignation of Daniel Coats, a former senator, seven months ago leaves a serious gap in the U.S. national security structure,” Negroponte and Wittenstein warn. “Internal politicization and lack of leadership in the intelligence community can be just as serious as the myriad external threats confronting the United States.”

Director of national intelligence is a position that didn’t exist prior to the terrorist attacks of September 11, 2001 — and the creation of the Office of the Director of National Intelligence, Negroponte and Wittenstein note, “was the largest intelligence overhaul since the CIA was created in 1947.”

“The Intelligence Reform and Terrorism Prevention Act of 2004 established a director of national intelligence to better coordinate the 17 government organizations, approximately 200,000 employees and more than $80 billion in annual expenditures that compose the sprawling U.S. intelligence community,” Negroponte and Wittenstein recall.

It remains to be seen who Trump will nominate as a permanent DNI; Trump has mentioned Rep. Doug Collins of Georgia as a possibility, but Collins is running for the U.S. Senate in Georgia and told Fox News’ Maria Bartiromo that he is not interested “at this time.”  But whoever Trump nominates, Negroponte and Wittenstein stress that the nomination must be based on intel considerations rather than “political considerations.”

“Unvarnished, nonpartisan intelligence is essential to making sound national security decisions,” Negroponte and Wittenstein assert. “Even the appearance of politicization undermines public trust in the dedicated men and women who serve in the intelligence community, often at great personal risk.”

Moreover, they add, Trump “must nominate a permanent candidate for DNI as soon as possible, and the Senate should use its influence to ensure that a qualified person is confirmed.”

“The president’s efforts to weaken the DNI threaten to turn back the clock on intelligence reform and risk increasing America’s vulnerability to strategic surprise,” Negroponte and Wittenstein assert. “We urge him to restore the DNI to the standing Congress intended in 2005 when the position was created.”