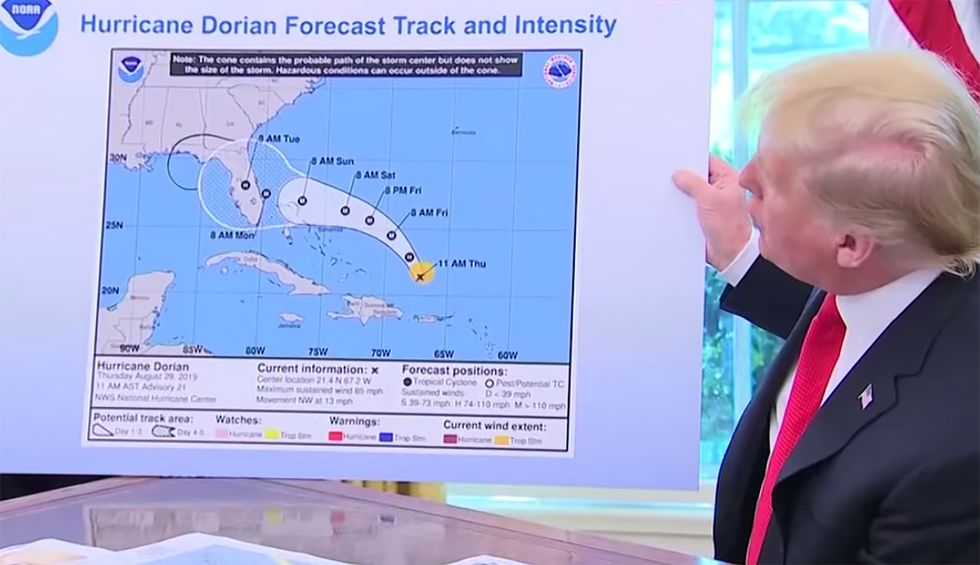 A trove of internal emails, released Friday through a Freedom of Information Act (FOIA) request, reveal senior NOAA officials disavowing an unsigned statement issued by the agency and scrambling to contain the fallout from the president’s false claim.

On September 1, 2019, Trump tweeted that Alabama would be among the states “most likely hit (much) harder than anticipated" by Hurricane Dorian, prompting forecasters at the National Weather Service’s Birmingham, AL office to assure Alabamians they were not in harms way.

“Alabama will NOT see any impacts from Dorian,” National Weather Service Birmingham tweeted, appearing to contradict the president. “We repeat, no impacts from Hurricane Dorian will be felt across Alabama.”

At a Sept. 4 Oval Office presser, Trump displayed a map of Hurricane Dorian’s path that appeared to be altered with a Sharpie. According to the New York Times, in the days following that presser, the White House “pressured NOAA to ‘clarify’ that forecast.” Two days later, on Sept. 6, an unsigned statement from the NOAA disavowed the Birmingham NWS tweet.

"The Birmingham National Weather Service's Sunday morning tweet spoke in absolute terms that were inconsistent with probabilities from the best forecast products available at the time,” the statement claimed.

That unsigned NOAA statement triggered an influx of inter-agency complaints among NOAA staffers, emails reveal. In an email to the agency’s top officials later that day, Craig McLean, NOAA’s acting chief scientist asked, “What’s next? Climate science is a hoax?”

“Flabbergasted to leave our forecasters hanging in the political wind,” McLean added.

In a Sept. 7 email to staffers, the acting chief scientist wrote, “What concerns me most is that this Administration is eroding the public trust in NOAA for an apparent political recovery from an ill timed and imprecise comment from the President.” McLean later said he is “pursuing the potential violations” of the NOAA’s science integrity policy, AP reported.

NOAA scientist Gary Shigenaka likewise asked Neil Jacobs, the agency’s acting administrator, to “reassure those of us who serve the public ... that we are not mere pawns in an absurd game.”

“You have no idea how hard I’m fighting to keep politics out of science,” Jacobs replied.

One email even shows agency officials expressing concern over the president’s “doctored” chart of Dorian’s path.

In a Sept. 5 email, Makeda Okolo, a congressional affairs specialist at NOAA, wrote, “Apparently the President is convinced that Alabama was in the path of Dorian and someone altered a NOAA map (with a sharpie) to convince folks.”