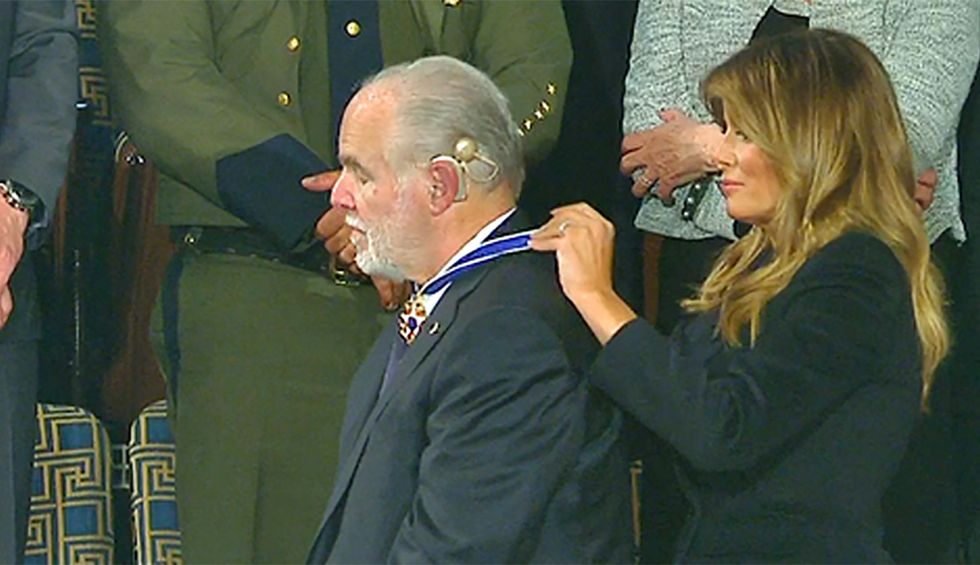 If anyone has reason to hate far-right talk radio host Rush Limbaugh, it’s Sandra Fluke: back in 2012, Limbaugh called the liberal activist a "slut" and a "prostitute" after she advocated for contraception coverage in health care. But Fluke, in an op-ed for USA Today, wishes Limbaugh — who is suffering from Stage 4 lung cancer — a full recovery and stresses that he deserves comprehensive health care, quickly adding that so do the millions of Americans who President Donald Trump is trying to take health insurance away from.

Truth be told, the Affordable Care Act of 2010, a.k.a. Obamacare, was greatly influenced by Republican ideas and the “universal health care via the private sector” approach that had been championed by President Richard Nixon, the Heritage Foundation and 2012 GOP presidential candidate Mitt Romney (now a U.S. senator representing Utah). But facts have never been Limbaugh’s strong point: he characterized the ACA as Marxism back in 2012. And eight years later, Trump is doing the same thing.

“The cruel irony of this year’s State of the Union address is that Trump used the podium to evoke the pain a family feels when a loved one is sick and to pray that Limbaugh’s treatment will be successful,” Fluke asserts. “Yet in the same speech, he lied to the American people, falsely tarnishing Democratic efforts to increase health care access as ‘a socialist takeover of our health care system.’ In truth, his administration and the Republican Senate are working to deny affordable access to life-saving care.”

The 69-year-old Limbaugh is extremely wealthy and can afford the best doctors, but Fluke stresses that multi-millionaires shouldn’t be the only ones with access to top-of-the-line treatment when they get sick.

“Limbaugh doesn’t deserve the Presidential Medal of Freedom,” Fluke emphasizes, “but he does deserve comprehensive, affordable access to health care — and so does every other person in this country, whether they’re a woman, an undocumented immigrant or a family struggling to make ends meet.”

As long as Democrats have a majority in the U.S. House of Representatives, the ACA isn’t going to be repealed in Congress. But Republicans have found another way to attack Obamacare: a lawsuit declaring that it is unconstitutional.

“By gutting the Affordable Care Act that Voices for Progress members fought for, preexisting condition coverage protections for as many as 135 million Americans could be eliminated,” Fluke warns. “If Trump really is protecting their care, why won’t he remove the administration from the lawsuit?”

In 2012, Limbaugh got more than he bargained for when there was a major outcry following his misogynist rant against Fluke: as he saw it, asking health plans to cover contraception for women was comparable to wanting to “be paid to have sex.” And Limbaugh certainly didn’t do Romney any favors: Democrats used Limbaugh’s hateful comments to tar and feather Romney — who won the GOP presidential nomination that year but lost to President Barack Obama in the general election.

Since then, health care has turned out to be a very strong issue for Democrats, who campaigned on the issue aggressively during the 2018 midterms and enjoyed a net gain of 40 seats in the U.S. House of Representatives. But that hasn’t prevented Trump and other Republicans from trying to deprive millions of Americans of health insurance.

“The hateful rhetoric of Rush Limbaugh did not silence me in 2012, and the lies of Donald Trump will not silence us now in our work toward a future in which everyone has access to quality and affordable health care,” Fluke declares. “Join us as we make our voices heard in November.”