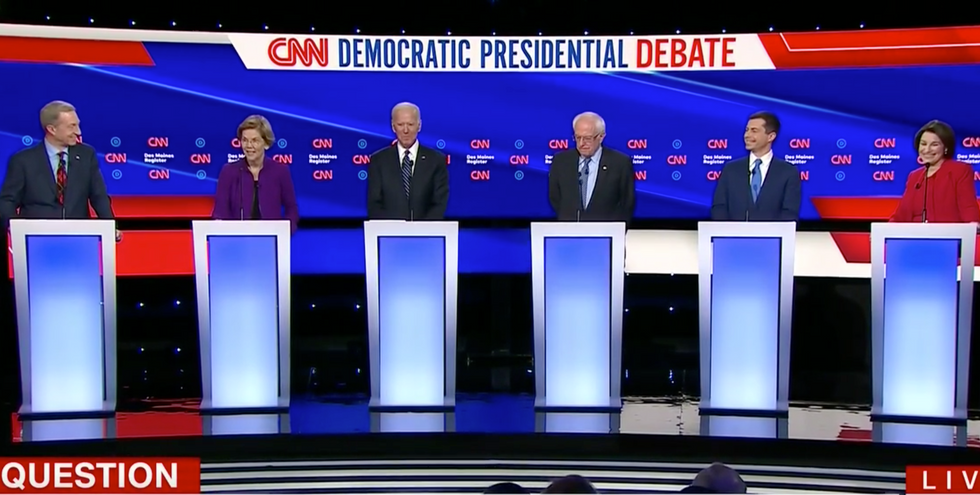 Now is the winter of Democratic discontent: the progressive- and moderate-leaning wings have veered between cold and hot war, social media lights up with apostasy-outrage every time a voter, elected official, or former candidate crosses ideological “lanes,” and within the left, groups have had to scramble to cool tensions between Elizabeth Warren and Bernie Sanders.

That’s a lot of drama (at least among very online types), but before going to the mattresses, Democrats should consider that their choice of nominee may not matter as much as they think. If they want to indulge in their traditional sniping about effective messaging, or the political ramifications of positioning themselves closer to the left versus the center, they can have at it. Electability is only ever clear in hindsight, and that's especially true in this election cycle.

But for those concerned about what the election of any of the current presidential contenders would actually mean for the policies of the federal government and the well-being of Americans, the truth is, the differences are probably relatively modest.

That’s a little counterintuitive because Bernie Sanders and Joe Biden, just for example, have some significant policy differences.  But those kinds of distinctions would mostly come out in the wash when the time comes to actually govern, for two major reasons.

The first is that nowadays, most federal government policy happens through executive branch agencies, not through Congress, so disparities between the various candidates’ legislative wish lists would mostly be mooted by Congressional gridlock. Extreme partisan dysfunction means that Congress has steadily passed less and less real policy in the last three decades, except in rare instances of unified one-party control. That is also why there have been few true legislative landmarks in the past decade – the 2017 tax cuts and criminal justice reform being the highest-profile exceptions (the Affordable Care Act is an exception but one that proves the rule: it only passed due to a brief and tenuous filibuster-proof 60 seat majority that is unlikely to be replicated any time soon).

The election of a new president, whether he or she identifies as a democratic socialist or a mainstream, center-left Dem, is unlikely to break that logjam. Political scientists have documented that the median ideology of elected Republicans has become starkly more conservative and homogenous (they are all highly conservative now), and their electorate demands that they fight Democratic policies tooth-and-nail. Republicans have amply demonstrated how willing they are to use the Senate filibuster to bring even humdrum Democratic legislative initiatives to a screeching halt. This total morass is what caused President Obama to give up on Congress entirely and turn to the power of his “pen and phone”, i.e., making policy through the agencies.

And if Democrats won a Senate majority and eliminated the filibuster – would that put big new laws back on the table?  Again, not as much as you might think.  Political scientists have also documented what we all intuitively know: Democrats’ congressional majorities continue to include a pastiche of liberals and moderates. So even under a Democratic majority in both chambers, it is still hard to see, for example, far-reaching progressive legislation like Medicare for All passing, at least not without substantial changes (for reference, the Sanders bill is cosponsored by less than one-third of current Senate Democrats, and think back to the significant compromises among Democrats required to pass the Affordable Care Act). The same would be true of more centrist policies, which would come under heavy pressure from progressives.

The fact is that Democrats are a big tent party with significant ideological diversity and a slight majority that identifies as either moderate or conservative. Even a President Sanders would not magically transform all of these Democrats into movement progressives, nor would a President Klobuchar suddenly make everyone a moderate. As a result, the final legislative products – if any were to even occur – under various Democratic presidencies would not be that different, because they would still reflect that push-pull within the Democratic caucus.

By contrast, federal agencies remain highly active. Their reach and power is far greater than most realize, employing 2 million Americans who directly manage 1 in every 5 dollars in our economy. These agencies shape every aspect of Americans’ prosperity, safety, health, and well-being since they serve as the backbone of major economic sectors (transportation, housing, military), drive business innovation (science and technical research, education, energy, agriculture), regulate our health and environment, and offset the economic squeeze on working Americans (housing, veterans benefits, health care).

People tend to think of the president as a unitary decision-maker for all of that – an avatar of the federal government. The reality is that the government enterprise is so vast that no one even knows how many federal programs there are. The president sets an overall direction and tone for the executive branch, but only gets involved in a handful of high-priority initiatives.  In voting for a president, the American people actually elect around 1,600 political appointees from one party or another who oversee decisions made by thousands of others – decisions that are very important, but happen well below the White House level.

There are surely some differences in whom the various candidates would appoint to those jobs (as well as the priorities they set for their agencies) but the pool of qualified personnel is actually fairly limited. Each party has a cache of experts working in think tanks, universities or industry that forms the majority of appointments to new administrations, and there would be significant overlaps among the choices of any new Democratic president. Moreover, the top Democratic also-rans will be able to exert pressure on the eventual nominee to keep them from veering off too far in one direction or another on appointments: we know because it just happened in 2014.

The bottom line is that regardless of who is president, most of her or his impact will emanate from the work within the agencies, and most will be carried out by similar, or similar-minded, personnel.

The second factor is that because Donald Trump’s appointees have pushed federal policy so aggressively to the right (or really, in any direction that seems like it might spite his predecessor, for example, rolling back Michelle Obama’s school nutrition and health initiative on her birthday) or entirely off the rails, the work of simply returning to a sound, competent, and generally Democratic track would likely consume much of the next four years and would yield similar outcomes no matter which Democrat occupies the White House.

As Michael Lewis brilliantly showed in his book The Fifth Risk, the amount of under-the-radar damage being wrought through ham-fistedness, corruption, and partisan spite is staggering. By populating the leadership of federal agencies with a collection of indifferent bumblers (such as a man who couldn’t recall the existence of his agency being put in charge of protecting our nuclear arsenal and electric grid) or corporate raiders on the make (a man who wants to privatize all weather forecasts, including tornado warnings, to his own company so that he can charge high fees put in charge of the agency that develops and provides them to the public for free), the administration has created enormous risks for Americans’ safety, squandered the number one source of American business and economic success, and generally driven many government functions into a ditch.

And for any Democrat looking for a caffeine substitute to get their blood running in the morning, just Google “things Trump did while you weren’t looking.”  Here are just two easy examples. On the environment, Trump appointees ended Obama’s most important carbon-fighting plan, and have been rolling back other key protections (about 100 of them as of this writing) almost faster than journalists can register. On health care, Trump appointees removed critical market supports for insurers and other mechanisms to keep Obamacare markets functioning and costs down.  The list goes on across every single agency and function of the government: a full-frontal attack on every significant item on the Democratic policy wish list.

Because the Trump administration has been so extreme, far and away the most significant thing that the election of a Democratic president – any Democratic president – would accomplish would be the appointment of competent professionals who would bring all of this to a screeching halt. After that, some things may be relatively easy to fix – for example, undoing the Trump freeze on vehicle efficiency standards. Others, like repairing our shattered relationships with allies, may never happen. But overall, cleaning up most of this mess and starting to advance Democratic policies again will be the work of years, not those much-ballyhooed first 100 days.

That is why the relative policy differences among Democratic candidates pale in comparison.

Democrats who obsess over those distinctions, or go to internecine war over them, are refusing to evacuate the Titanic because they don’t get to choose seating arrangements in the lifeboats.  Democratic battles over policy and ideology are inevitable, because Democrats never agree on anything (that's why they're Democrats – if they agreed with each other, they'd be Republicans). But they should at least be clear on what they are fighting about.

If Democrats want to apply motivated reasoning to the political and personal virtues of their preferred candidates, they should feel free. But they should not kid themselves about the real-world impacts that their candidates might achieve if elected. Those impacts would be real, significant, and broadly similar.