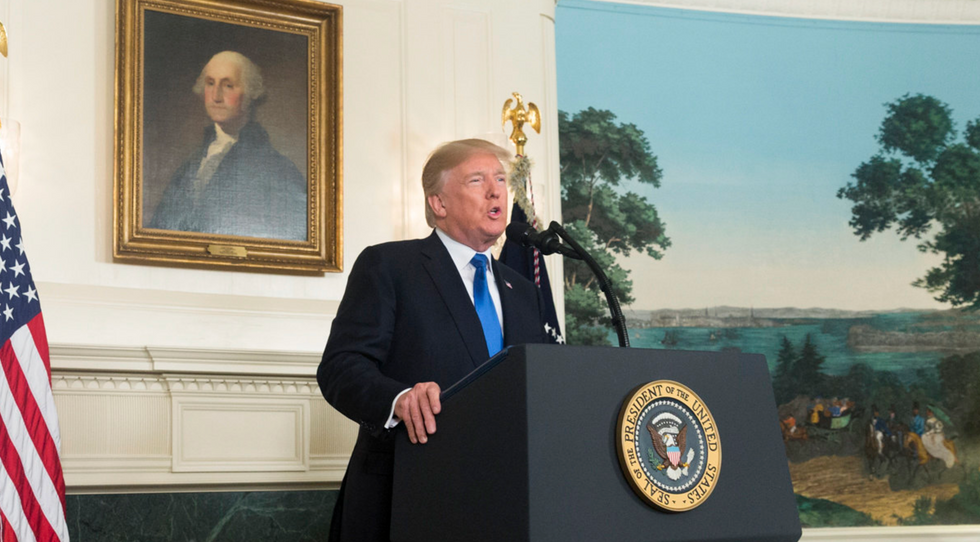 When President Donald Trump held a White House press conference on Wednesday, he seemed hopeful that the United States and Iran — rather than getting into an all-out war — were deescalating. Trump even asserted that he would be open to the possibility of better relations with Iran, if possible. Conservative Washington Post columnist Jennifer Rubin, however, found the press conference to be “incoherent” and “rambling,” for the most part — and she asserted that Trump’s war-mongering is not going to win over voters this election year.

Trump announced, “Iran appears to be standing down, which is a good thing for all parties concerned and a very good thing for the world.” But, Rubin observes, “From there, it was an incoherent, rambling and at times silly harangue blaming the Obama Administration for the strike on U.S. forces, calling for other countries to abandon what is left of the Iran deal and vowing that Iran would not get nuclear weapons.”

Rubin adds, “Of course, Trump’s decision to withdrawal from the nuclear deal and embark on a policy of ‘maximum pressure’ instigated the current cycle of violence and prompted Iran to break through restraints on its nuclear program. After Trump spurned our allies, the chances they will respond to Trump’s plea to become more engaged in the Middle East is approximately zero.”

“With even Republican senators calling for deescalation,” Rubin explains, “Trump’s willingness now to take an off-ramp on the road to war is not surprising. Moreover, the notion that it would be good politics to continue ratcheting up tensions does not take into account Trump’s low credibility.”

Rubin observes that according to a recent Reuters/Ipsos poll, 54% of Americans “disapprove of Trump’s handling of Iran, up 9 points from a poll in mid-December.” And the killing of Iranian military commander Qasem Soleimani, she adds, isn’t increasing Trump’s popularity.

“So far, the killing of Iranian Maj. Gen. Qasem Soleimani has not helped Trump’s standing overall,” Rubin notes. “His approval/disapproval remains steady at 41% approval/54% disapproval. A remarkable 42% strongly disapprove, including 38% of independents.”

Rubin goes on to say, “Likewise, cheering for more military strikes against Iran or, worse, ridiculing anyone who questions the wisdom of Trump’s unilateral actions without congressional authorization, might not sit well with voters. As a result of Trump’s bellicose and incoherent foreign policy, a president promising to end ‘forever wars’ soon will have deployed 18,000 more troops since his ‘maximum pressure’ campaign began in 2019….. How does Trump’s base feel about that?”